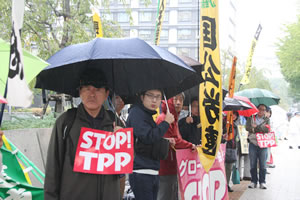 The ruling parties today rammed bills to approve the Trans-Pacific Partnership agreement through the House of Representatives Special Committee on TPP. What’s more, the vote was taken ahead of a vote at the plenary session to approve the Paris agreement. Such an outrage is absolutely unacceptable. The National Confederation of Trade Unions (Zenroren) lodges a strong protest at the vote taking.

The deliberation on the bill proceeded in an unusual atmosphere in the current extraordinary session of the Diet. Eighteen errors were found in the Japanese text of the documents translated by the Japanese government. The simultaneous buy and sell (SBS) system for a portion of Japan’s rice imports is suspected of being abused. The government and ruling parties have refused to provide information materials saying they cannot publicize information about how the negotiations proceeded. Calls for a vote to be taken on the TPP agreement by cutting the deliberation short were made loudly. The chairman of the special committee used his authority to convene the committee meeting by ignoring strong opposition. The parliamentary debate on the TPP is far from being sufficient. On top of this, is the repeated outrageous political gaffe made by the Minister of Agriculture, Forestry and Fisheries Yamamoto Yuji. How can the TPP bills be put to the vote under these circumstances?

Even the very inadequate discussion that has taken place in the Diet has revealed a host of problems the TPP has. The government’s impact assessment is very intentional. The common wisdom is that the trade deal will have negative effects on the nation’s economy; that it will seriously affect the nation’s agriculture, forestry and fisheries as well as the people’s living conditions in various fields, making people ’s livelihoods harder, while also cooling down the local economy; that Japan’s economic sovereignty will be threatened by the existence of the ISDS provisions; and that it will force the Japanese economy into subservience to the large global corporations’ profits.

With a host of problems being exposed internationally, the two major candidates in the US presidential election have declared their opposition to the deal. There are countries that have not yet begun their respective processes to approve the agreement. There is no need for Japan to go ahead with an early ratification.

Zenroren will continue to do all it can, to block the vote in the current extraordinary session of the Diet by joining forces with many other organizations. The fallacy of the Abe government’s economic policy called “Abenomics” has been laid bare in that contradictions and cracks are deepening in various sectors. The task now is for us to further increase the effort to build up broader cooperation with publicly rejecting Prime Minister Abe’s call for Japan to become the world’s easiest country for businesses. We will continue to help increase public awareness and cooperation and push for a wage increase from the bottom up, quality jobs, improvement in social services and education, an increase in support to small-and medium-sized businesses and agriculture, forestry and fisheries, the development of local industries, and the effort to make the economy and society sustainable and recycling-oriented.