To contain the COVID-19 pandemic, the Peruvian Government declared a state of emergency from 16 to 30 March, imposing a “mandatory social isolation” to all Peruvians with the exception of some essential activities such as the health system, food industry, drinking water service and some local transport.
In the face of the progress of the pandemic, the authorities have extended social isolation, until May, with economic activities restricted according to a national recovery plan; the construction sector is expected to be activated in August.
As in all neoliberal regimes, the health system is collapsing. Economic support for vulnerable sectors is minimal as it only favours the capital.
To date there are 19,250 COVID-19 infected people, 7027 have been recovered and 530 have died, which ranks Peru in third place in the region, after Brazil and Ecuador.
Employed construction workers registered in the Ministry of Labour are 450 thousand; as of March 16, 110 thousand workers were registered. This low employability is the result of the paralysis of infrastructure works, because of the “lava jato” corruption case, the Odebrecht company, which has been in court since 2016.
The crisis in the construction sector in Peru has exacerbated.

The Government issued some measures to alleviate unemployment, including a paid leave for the second half of March. However, until today only 10% of construction workers have been paid by their employers.

These measures are supposed to protect workers’ employment and income which have been wiped out by the total suspension of work, a measure imposed to benefit large business capital.

To date, no company has been sanctioned for it. Regional governments and municipalities have left construction workers homeless.

Peru’s Federation of Civil Construction Workers has sued companies that have violated labour rights and is demanding the Government to include in the granting of the social economic support help for all unemployed workers in civil construction through the National Register of Civil Construction Workers (RETCC) , among other mechanisms. In addition, together with the General Confederation of Workers of Peru – GTP on April 23, we held a “saucepan demonstration” as an expression of protest against measures affecting workers, also demanding a tax on wealth and social economic support for all families. 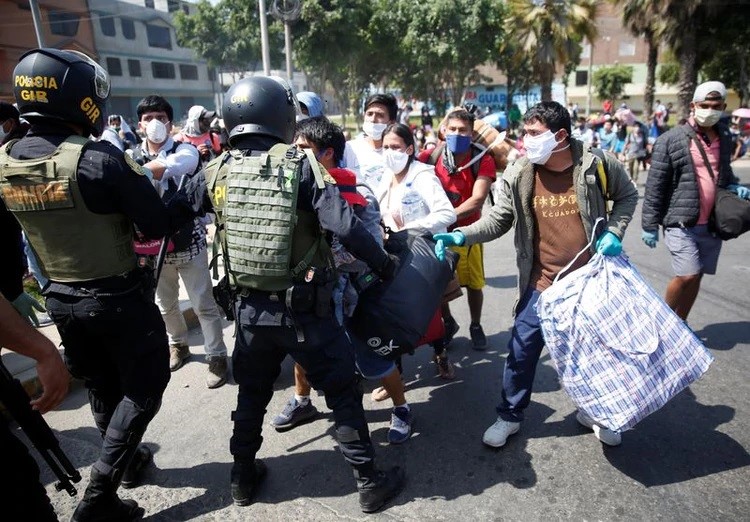 Neoliberal regimes in emergencies and economic-social crises favor the saving of large capital and businesses; while the large majority of the people carry the burden towards their death.

The crisis forces us to rethink the organizational and communication ways, using intensely existing technologies which are insufficiently used in our trade union work.

It is clear that the ideological battle is fundamental to strengthening trade unions whose existence is a threat to the objectives of capitalist overexploitation and domination systems.