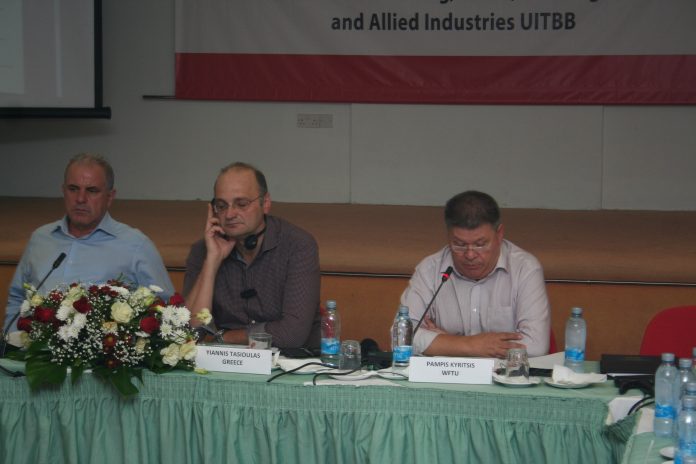 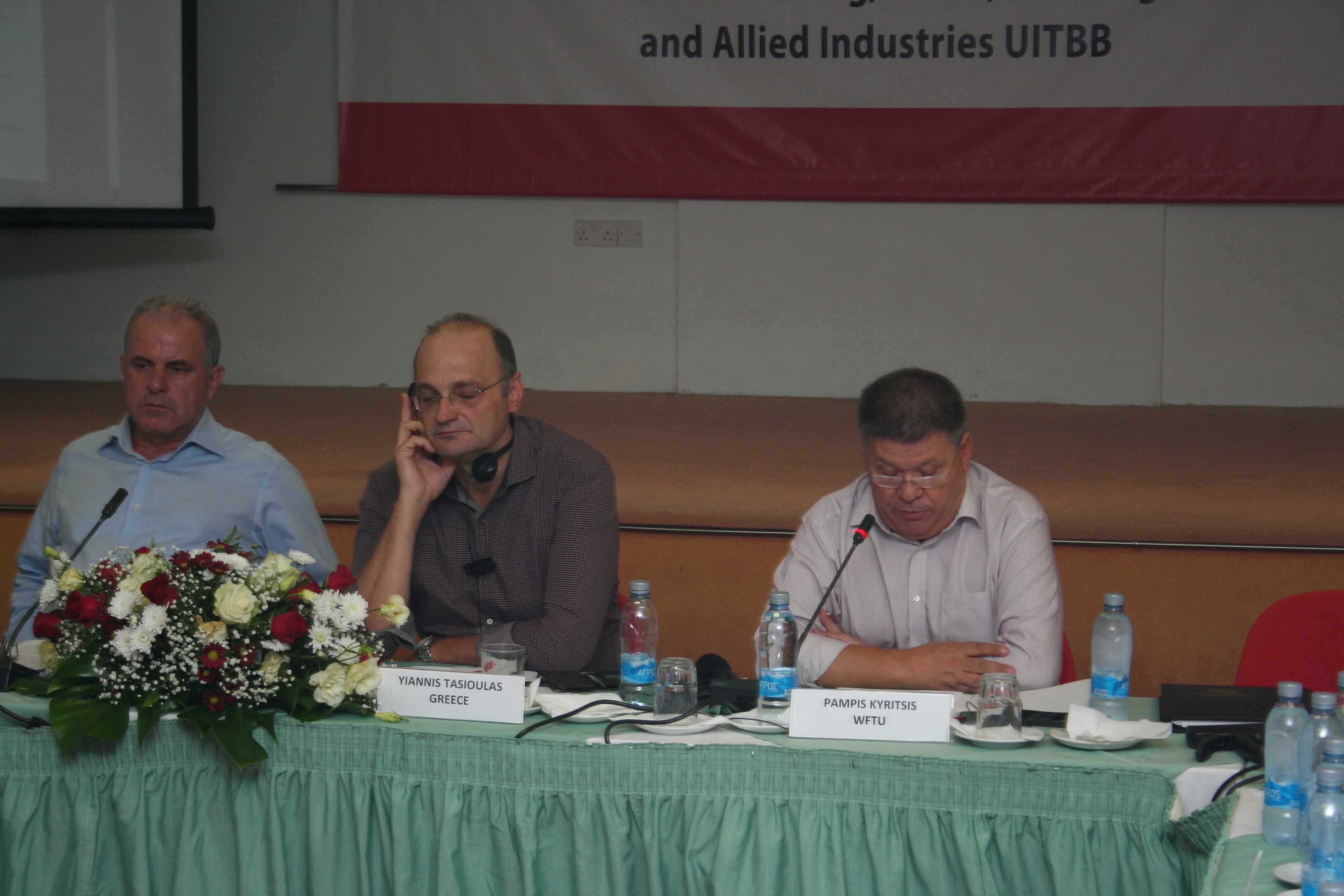 It is with great pleasure that I welcome, on behalf of the General Council of PEO, all the colleagues who are with us here today, in the UITBB Executive Committee Meeting in Cyprus. We wish that your stay is pleasant and creative.

PEO salutes the fact that this meeting is organised in our country and we would like to express our thanks to UITBB for the longstanding support and solidarity to the struggle of the people of Cyprus to solve the Cyprus problem.

In our time, the produced wealth can sustain the people on this planet many times over, but instead, millions of people are malnourished and hundreds of thousands of children die of hunger and diseases, while the wars and imperialist interventions aiming at political and economic control are expanding.

We in Cyprus know very well the disastrous results of the imperialist moves, because we have experienced war and destruction first-hand.

This is why our top priority is the effort to solve the Cyprus problem and reunify the island without foreign military presence and guardianship.

For 15 months, following the collapse of the talks at Crans-Montana, the Cyprus problem has been in a barren and dangerous stalemate.

For the progressive people of our land, the solution of the Cyprus problem remains a vital need. No conquest can be steady and permanent, as long as our country remains divided. We are steadily focused on the goal which has been agreed upon on the highest level between the two communities and as per UN resolutions, for a bi-zonal, bi-communal Federation, with political equality as this is defined in the UN documents, for a state with a single sovereignty, single international personality and single citizenship, without foreign military presence, away from military alliances, operating as a bridge of peace and security for the area.

We are working consistently, with the class-oriented Turkish-Cypriot trade unions for a peaceful coexistence in a reunited, secure federation.

We insist that the negotiations should begin where they stopped and that, within the framework set by the UN GS, the two leaders should creatively and steadily work towards finding a solution.

As far as the economic and social situation in Cyprus is concerned, I do not think it is any different than the situation in most of the European and world countries. The philosophy and general economic and social politics which are implemented by our government, is aligned with the harsh, neo-liberal politics of the EU and the IMF. Such politics, through the process of managing the capitalist crisis, have led to a worsening of the living conditions of the vast majority of our people, and the provocative redistribution of wealth in favour of the few.

In the name of a so-called neoliberal “rationalisation” and reforms, major social conquests such as the Cooperative movement have been destroyed, while other such as the Cyprus Telecommunications Authority and the Electricity Authority of Cyprus are being targeted, while the social state which was built on the people’s sacrifices, has been practically destroyed.

The growth rate of the economy may have become positive since its collapse in 2014, but this on its own is not an indication of social progress.

Progress means development and fair distribution of its results.

The Trade Union movement is fighting for the reinstatement of the rights that were hit during the peak of the crisis in 2013. We have, partially or wholly, achieved that with almost all the collective agreements that have been renewed in the last years.

However, the widening of the social inequality in today’s conditions, is not dealt with satisfactory renewal deals of the existing collective agreements.

The fear and insecurity of the workers in the face of unemployment and the clear shift of power to the side of the employers, have resulted in much bigger chances for the exploitation of the workers, through the deregulation of labour and the undermining of the trade union movement and the implementation of the collective agreement.

This is why PEO’s priority today is the state’s obligation to adopt legal measures, so that the collective agreements are not only drafted but implemented by all. For the workers who, for various reasons, are not covered by collective agreements, we are asking for the creation of a minimum framework of labour rights, through an institutionalised collective bargaining that at least deals with salaries, working hours and overtime, holidays and welfare fund.

The government and the leaderships of the employers’ association, as is expected, refuse to accept the realities which do not suit them, and they have now remembered the freedom of agreements and the clear collective bargaining.

And they only remember the “poor” employees of the private sector with the low salaries, when workers in the public sector, which they call privileged, decide to mobilise to demand or protect their own rights.

As one of the Vice Presidents of WFTU, I convey to your meeting warm, collegial and militant greetings on behalf of the Presidential Council.

It is made obvious that in today’s conditions, the class-oriented struggles of the workers is the most decisive factor for defending labour and social rights, against the politics of the capital and the multinational companies. Expressing solidarity for the workers’ struggles should be high in our priorities.

WFTU is steadily against wars and interventions and defends the right of the peoples to decide their own fate and future. WFTU expresses its solidarity and support to peoples fighting for peace and freedom. It defends the rights of the workers and resists the attacks by the capital and the monopolies.

We are all fighting for a better world without injustice, and without the exploitation of humans by humans.

The strengthening of WFTU and the increase of its influence, undoubtedly enhances its class-oriented alignment in the trade union movement, strengthens its fighting spirit and decisiveness in an age where the attack against the political, social and labour rights of the workers is increasingly becoming harsher and multifaceted.