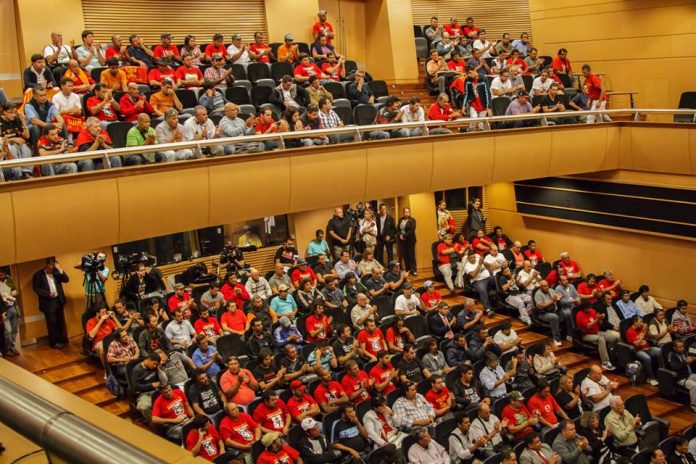 UITBB’s 16th Conference which was held in Montevideo from 15-17 April 2015 approved the action report of the Executive Committee and the speech of the President. Additionally, it decided the following:

1. On improving the state of the workers of the sector:

– The Conference repeats its position that the problems of the workers in the sector are common and they were created by the capitalist crisis, fuelled by its contradictions.

– As a result of the implemented capitalist politics, millions of workers around the world are unemployed, experiencing a rapid reduction in their income and pushed into poverty.

The Conference repeats its position that:

– There is only one workers’ class, irrespective of colour, religion, language, place of origin. Immigrants are a part of that class and they share the same problems and interests with local workers.

– Immigration, both internal and external, is not the immigrants’ choice. It stems from imperialistic wars and poverty resulting from the implementation of capitalist policies.

Our basic duties are:

– To develop actions so that immigrant colleagues can join the workers’ struggles.

– To participate in various mobilisations for the immigrants, aiming to change their way of thinking, which pertains to an indifference of what is going on around them, as they might believe that they will only work for a while and then leave.

– Condemn and resist any effort on behalf of forces, which push workers towards xenophobia, fascism and racism, taking advantage of their negative feelings.

– In order to deal with uncontrolled entrance in the construction sector and limit the use of immigrants as cheap labour, we must fight to establish a certification standard for construction workers, with one basic prerequisite being that the workers know the local language.

3. On health and safety:

– The Conference notes that, unfortunately, the construction sector leads the statistics in work accidents as thousands of workers throughout the world pay their daily struggle for bread in blood.

– The Conference demands the safeguarding of the workers from accidents and the safety of their health, and it also demands a substantial operation of safety committees everywhere.

– The Conference repeats that in order to improve conditions regarding this issue, the employers must be pushed to take measures and understand that the expenses must be defined by the need for total safety in the workplace.

– Because the construction industry is an open sector and in many cases it is used as a refuge by unskilled labour force, all newcomers in the sector must at least undertake basic, intensive training on health and safety issues, and acquire the relevant certificate.

It is a common understanding that most work accidents happen in construction sites where there is no organised trade union and where, consequently, Collective Agreements and Labour Legislations are not implemented. This goes on to underline the importance of the daily efforts of UITBB members in organising the workers in the sector and how much this success will help in the amelioration of this major problem.

– This daily tragedy will be limited significantly with our constant efforts and struggles for a society which is not about the profit alone but which respects human values and satisfies the needs of the workers.

4. On our organisational situation:

– The Conference appreciates the efforts made in the previous period to improve our organisational situation, and believes that in order for UITBB to function even better, a lot more still needs to be done.

– We have to make sure that the Executive Committee convenes once a year, as per the Constitution. At the same time, these meetings must be better prepared in order to become more productive and goal-oriented.

– As far as our efforts for enlisting new members are concerned, our goal should be to register organisations directly connected to the sectors we represent. They also must be organisations, which are active among the workers.

– As there are members whose relationships with UITBB have become inactive or severed for various reasons, the Secretariat should undertake a patient and persistent effort, characterised by mutual respect, aimed at restoring these relationships and engaging them into the general activities of UITBB once more.

5. On our educational work:

– The Conference believes that the education sector can be developed even more, as there is always room for improvement. Within this context, the role of the UITBB newsletter and website must be upgraded.

– UITBB members, as well as other friendly organisations, must contribute towards this task offering any help possible, starting with feeding the newspaper and the website with information on a regular basis, in order for us to become more effective in informing our members immediately.