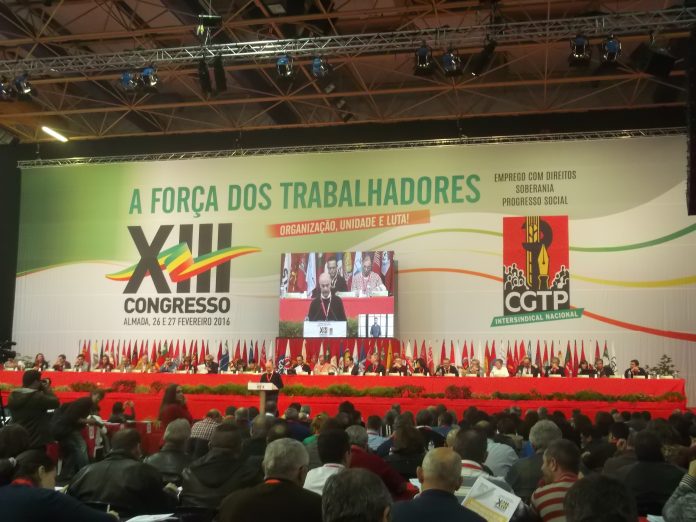 On behalf of FEVICCOM – Portuguese Federation of Trade Unions of Construction, Ceramics and Glass, we welcome all delegates and guests present at the Congress of the CGTP – IN.

Our Congress is a privileged space for discussion, reflection and balance of work done in the last four years, requiring us all to redouble our efforts to tackle the massive offensive launched against the workers. Such an offensive by the employers and the right wing government, was nothing more than a settling of accounts with the achievements, guarantees and social achievements of workers.

A reckoning with the struggles and aspirations of generations of workers who did not surrender, and who aspire and struggle for a better life.

But this is also a time for reflection, discussion, to look and trace paths and strategies for the future.

This Congress is taking place during a time of various complexities and challenges.

But it is also a moment that, as life has shown, with connection to the workplace, to workers, to their just demands and their strength, there are plenty of fighting battles with positive results.

The sectors represented in the affiliated trade unions of FEVICCOM, ranging from construction, ceramics, glass, cement, wood and cork, have been and still are the sectors most affected by the closure of a large number of companies and the corresponding destruction of thousands of jobs, with devastating social consequences for the workers and their families.

But regardless of the size of the destruction, there are still thousands of workers and many workplaces with great potential for unionization. There are many workers who are not unionized, increasingly serious situations of great precariousness, with yields ever lower and we need to listen, organize, monitor, clarify and mobilize.

To this end, it is necessary to put into practice the Trade Union’s Integrated Action with objectives and collectively defined goals for each structure. Moreover, measures should be taken to further improve the working conditions in order to adapt and make our Trade Union intervention more effective, with periodic evaluation and any changes that are necessary. An action that is not a formality or paperwork, but it is worked collectively in all its components, with unionization, the strengthening of the grassroots organization, with the election of more Trade Union’s delegates and representatives for OSH.

An action that responds to the just aspirations of the workers, to better contribute to the progress of society, with better quality of life, better working conditions, with a fairer distribution of the wealth created, more employment, social rights and labor.

It is necessary that from the workplace, we should be more demanding and adopt organizational measures to expand the dynamic of struggle for better wages, reduced hours and better living conditions for all workers, and respond to the sharp exploration which is carried out by big business which, with impunity violates the rights, blocks collective bargaining, labor relations and dehumanizes worse working conditions. In this context, it is necessary that collective bargaining is for us assumed and valued in conjunction with the workers, who need to know and exercise their rights, to be informed, especially the young and those who still have loose links.

Within collective bargaining in businesses and workplaces, against exploitation, against the unilateral imposition of rules in labor relations by the employer, there lie the roots of trade unionism. The workers will continue to add strength to boost collective bargaining, protect their rights and improve wages and working hours.

The organized struggle of the workers, the strengthening of Trade Unions – however much it costs to the proponents of returning to the past, where the employer unilaterally imposed his will – the summer workers meeting their demands and aspirations towards social progress; all these are very important.

It is towards this future that we will, with the strength and persistence that characterize us, fight and work with the workers for their rights and social progress.

Long live the CGTP – IN!