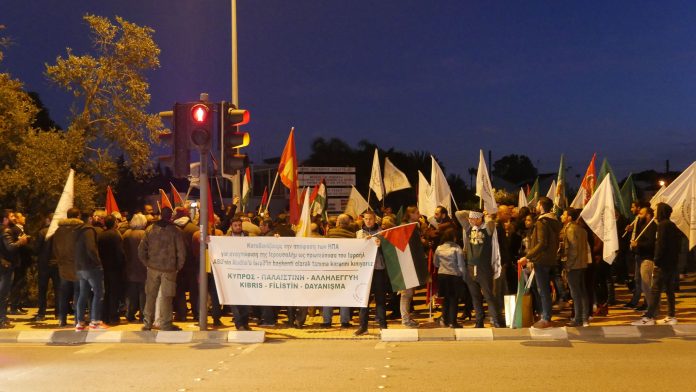 The WFTU Affiliates and friends in all the Countries of the World responding to the call of the World Federation of Trade Unions are organizing this week solidarity initiatives and events declaring that “Palestine is not Alone!”

Palestine is not alone

The Trade Unions from 14 countries of the Mediterranean who we met in Marseille, of France on 13-15 of December 2017 we state that Palestine is not alone.
We condemn the decision of USA President to declare Jerusalem as Israel’s capital. This act reveals that imperialism is ruthless, barbaric, aggressive.
The US is trying to legitimize the Israeli occupation, the continuous crime at the expense of the Palestinian people with murders, imprisonment, walls and settlements. This development is connected with the US plan for border change in the region aiming at the control of the energy resources and their transport routes. These are the antagonisms that dictate the different stance of Germany, UK, France. Nevertheless, the EU has grave responsibilities because it is upgrading the relations with Israel, equating the perpetrator with the victim and characterizing the just struggle of the Palestinian people as terrorism.
Our duty is to support the heroic Palestinian people against this aggressiveness, to support this people who give a long-term struggle against occupation army, against the policies of the Israeli governments, against the policies that are calling on them to compromise with the Israeli occupation.
All Palestinian trade unions who are proud to struggle for the vindication of the Palestinian People will find us in solidarity with them.
Today’s circumstances, all the more so after the unacceptable decision of the USA President, require a class-oriented, youthful, internationalist, massive, uniting trade union movement; A trade union movement free of bureaucratic interventions and corruption. Only a trade union movement which is organizationally independent and which struggles can assist the Palestinian people’s struggle.
In this context we call all unions to support the international week of solidarity to Palestine called by the WFTU all over the world. All together
We demand:
• Recognition of the Palestinian state on the 1967 borders and east Jerusalem as its capital,
• The end of the settlements and the withdrawal of all settlers who have settled across the borders of 1967,
• The demolition of the separation wall in Jerusalem,
• All the Palestinian refugees to be granted the right to return to their homes, based on the relevant decisions of the UN,
• The elimination of any exclusion against the Palestinians in the West Bank and the Gaza strip,
• The immediate release of imprisoned Palestinians and other political prisoners kept in the Israeli prisons,
• The withdrawal of the Israeli army from all the occupied territories of the 1967, including the Golan Heights and the Sheba area of Southern Lebanon