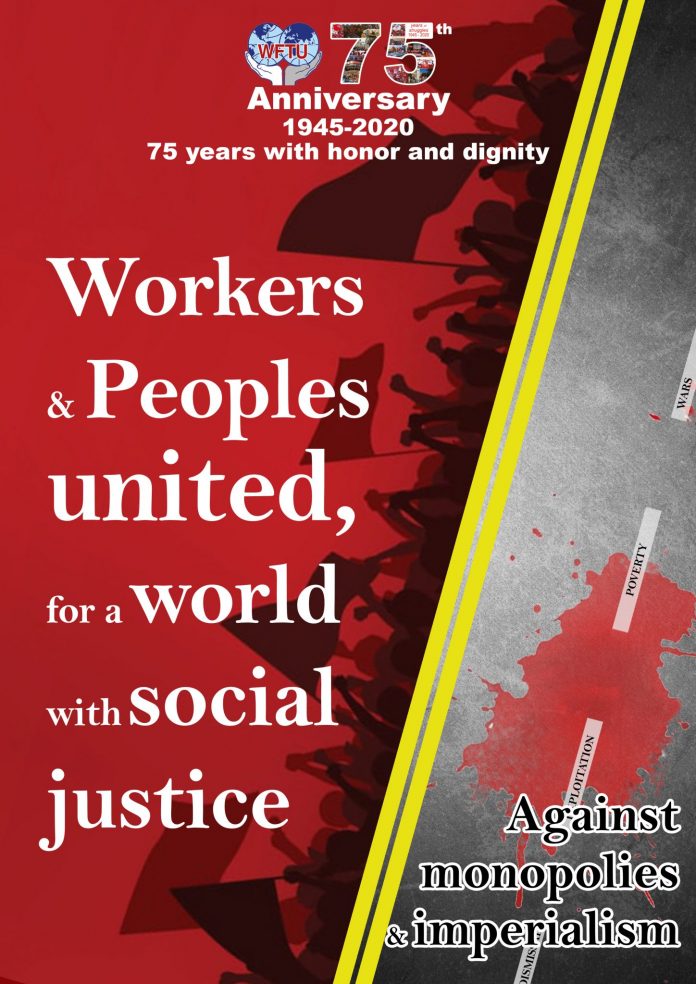 75 years later, the WFTU continues on the same uncompromising path, with unity, class-oriented, with internationalism. 75 years with honor and dignity!

The year we are going through, the year of the 75th anniversary of WFTU, is already stayed in the history of the WFTU for the rich action of the WFTU affiliates and friends in every corner of the planet.

The coronavirus pandemic may have caused problems in most countries of the world but the class oriented trade unions struggled by all their means and succeeded in stopping in practice the attempt to restrict trade union rights and freedoms by the governments.

Mobilizations, strikes, events, protests and seminars were organized all over the world, successfully combining the struggle for the health of the people with the 75 years of life and action of the WFTU. We have proved and we are proving that no obstacle can bend our unwavering belief in the struggle for a world without the exploitation of man by man.

We continue… the year 2020 is dedicated to the 75th anniversary of WFTU, an anniversary not only historical but also an anniversary of action. The workers around the world, for 75 years, dedicate this day to honor the World Federation of Trade Unions under its demands and slogans.

We plan, schedule, mobilize and culminate our actions on October 3rd, honoring in the difficult conditions we live the message sent by the pioneer workers from Paris founding the World Federation of Trade Unions 75 years ago.

Everyone in the activities of the national organizations of WFTU!

Everyone in the battle for the celebration of the 75th anniversary of the founding of the WFTU!

Workers and Peoples united, for a world with social justice, against monopolies and Imperialism