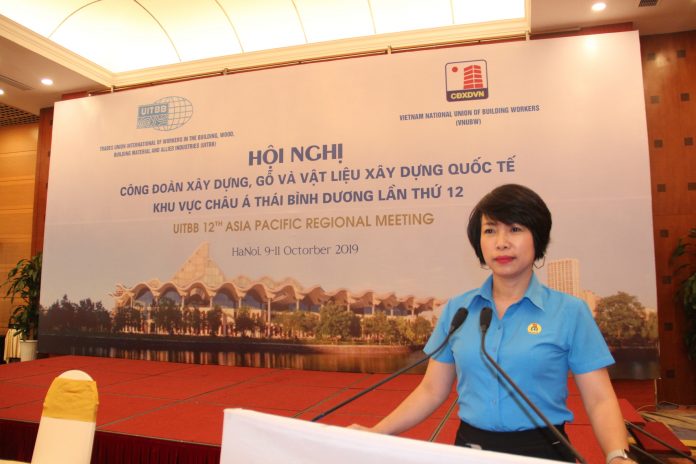 Welcome Speech by Mrs. Nguyen Thi Thuy Le, President of the VNUBW at the 12th Asia-Pacific Regional Meeting of UITBB 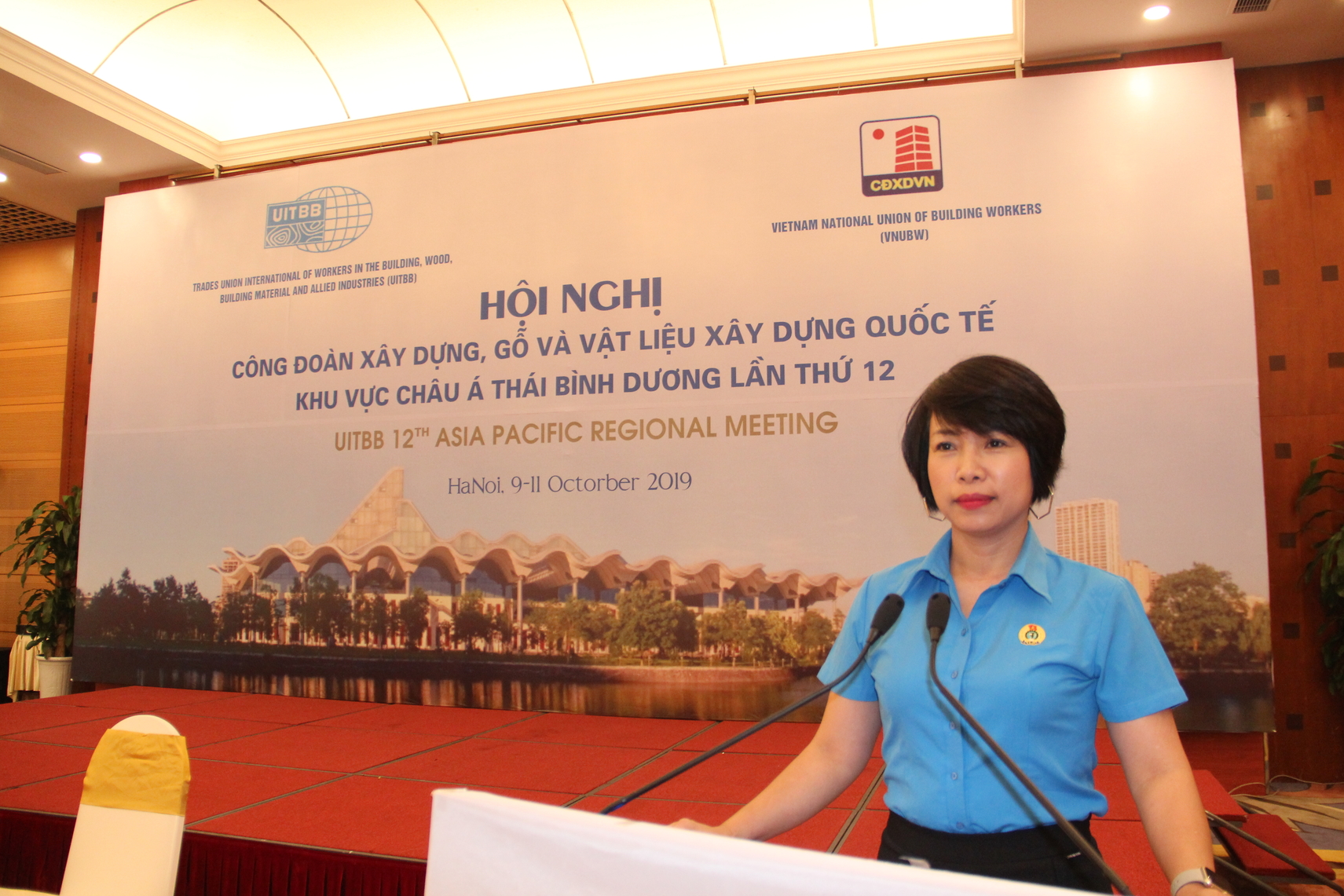 On behalf of over 200,000 members, workers, employees and officials working in the Vietnamese construction industry, please allow me to warmly welcome leaders of the VGCL, the Vietnamese Ministry of Construction (MOC) and distinguished guests and delegates of trade unions from 5 countries in the region to the Asia-Pacific Regional Meeting of UITBB hosted by the VNUBW in Hanoi on the occasion of the anniversary of 65 years of the Capital Liberation Day (10 Oct 1954 – 10 Oct 2019).

The VNUBW regards your presence at this meeting as the solidarity, friendship, support and strong encouragement to us in the establishment and sustainable development of the trade union movement in the Vietnamese construction industry.

I would like to wish you good health, happiness and success. Hopefully, you will have memorable impression in our country during your stay here.

The VNUBW is a national industry union affiliated to the VGCL with a tradition of over 62 years of establishment and development.

Throughout that history, with the efforts of striving, dedication and sacrifice of many generations of officials, members, workers and employees, the VNUBW has gained important achievements, making great contributions to the cause of struggle for national liberation and reunification, building up the socialist Vietnam and building an ever-growing Vietnamese Trade Union.

In parallel with domestic trade union activities, the VNUBW has also had 44 years (since 1975) as a member of UITBB and actively participated in activities conducted by the UITBB.

The 8th Congress of UITBB took place from 3 to 8 September of 1979 in Warsaw, Poland where Comrade Pham Tinh, Secretary of the VNUBW during 5th and 6th term was elected as Member of the Executive Committee and re-elected in the 9th Congress in Sofia, Bulgaria on 11-16 Oct 1983. 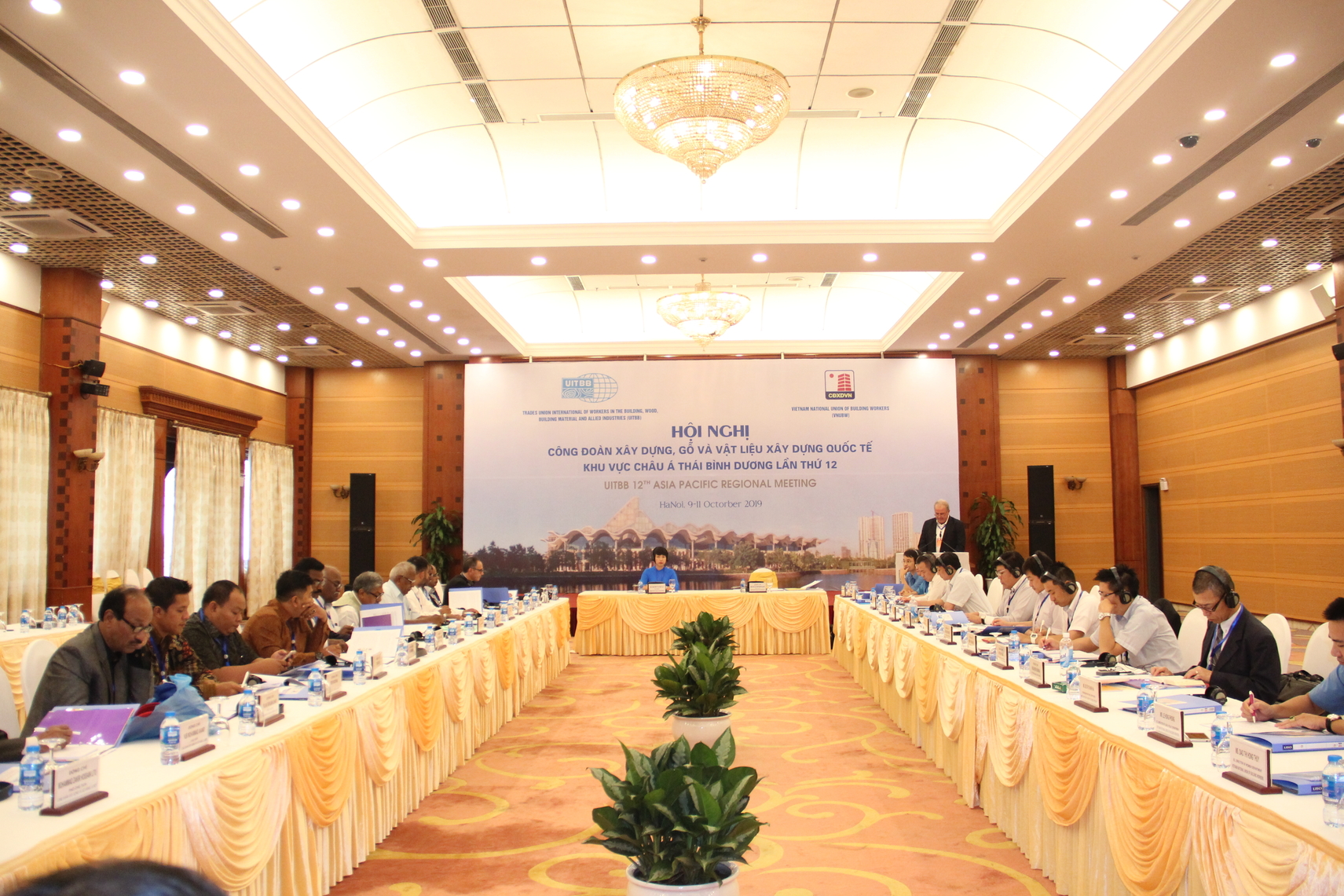 Since 10th Congress, all of the Presidents of the VNUBW were also elected to be member of the Executive Committee of UITBB.

Over the past years, the VNUBW in particular and the Vietnamese people in general have received much support and assistance of the construction unions of many countries. Especially, at the 5th Congress held in Berlin, Germany in 1967, UITBB launched an international campaign to express solidarity with the Vietnamese to ask the US army to withdraw troops from Vietnam. There were 188 delegates from 46 countries around the world participating in the campaign “One bag of cement for Vietnam”. That was a successful solidarity campaign, contributing to encourage Vietnamese people to gain victory in the national revolution and unification.

Through this Meeting, the VNUBW would like to express our sincere thanks to the construction unions affiliated to UITBB.

Over the recent years, in spite of difficulties and challenges in the economic condition at the region, nation and sector levels, the Vietnamese construction union has had numerous innovations in terms of contents and working methods, effectively implementing targets and programs set out in the resolutions of its Congresses to join with enterprises in solving difficulties in their production and business, taking care of spiritual and material life of workers, protecting their legitimate and rights and benefits, developing harmonious, sustainable and advanced industrial relations at enterprises; organizing many emulation campaigns in the production; participating in and organizing meaningful and practical activities and programs to arouse the patriotism and the love in working of the staffs, members and workers of the industry, improving the living standards of workers, contributing to fulfill the economic and political missions of the construction industry assigned by the Party and the State. 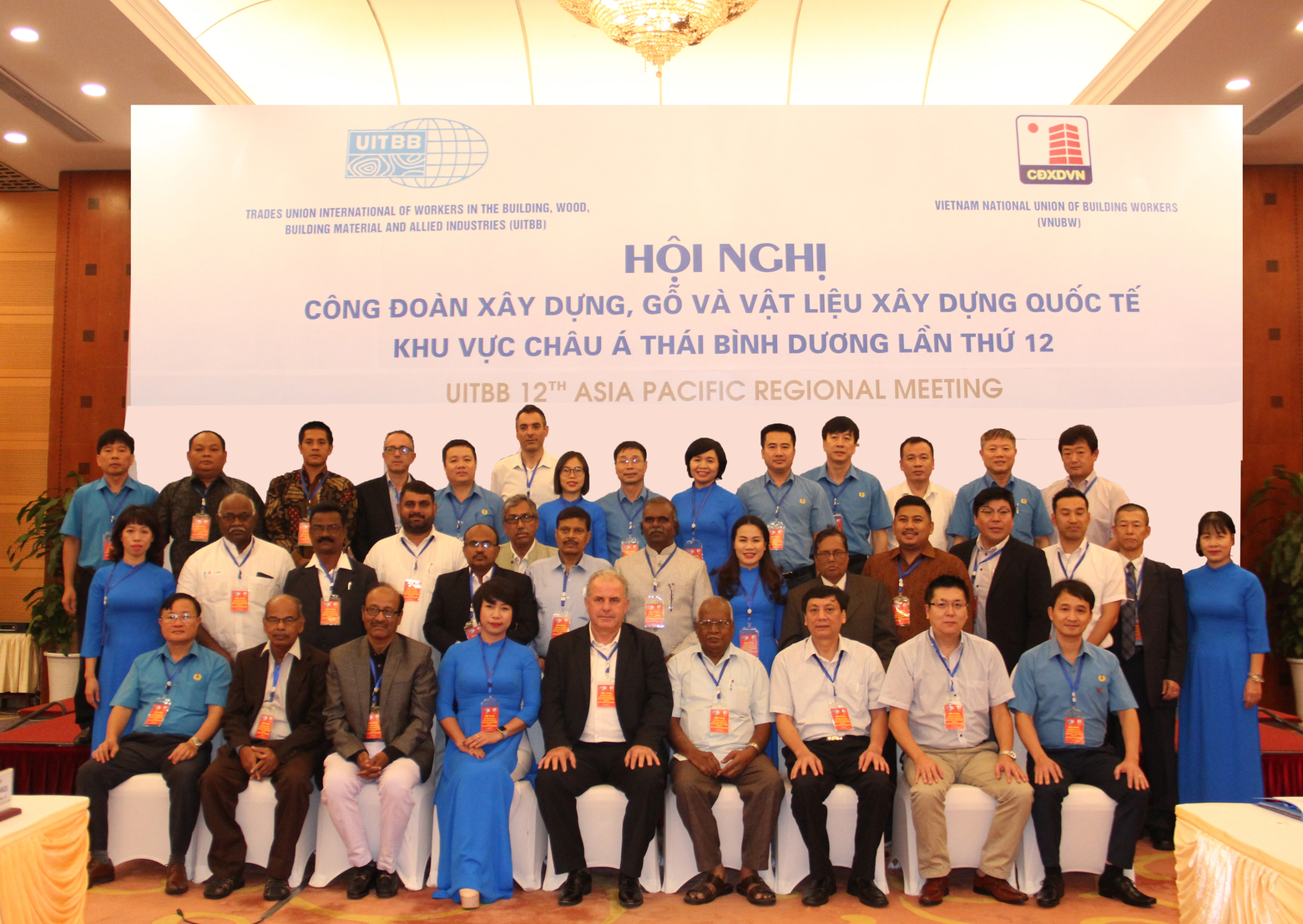 Within the working plan framework of 2019, it is a great honor for the VNUBW to host the 12th Asia – Pacific Regional Meeting of the UITBB. The meeting will focus on the discussion of the following issues: social insurance, occupational health and safety, women workers in the construction sector, migrant workers, seasonal workers and technology change in the sector. These are the great concern and important tasks of the countries in the world and the region during the current period.

On this occasion, please allow me to wish comrade Michalis Papanikolau, General Secretary of the UITBB, and all of you good health, happiness and success. We wish the friendship and cooperation of the VNUBW and the trade unions participating at this meeting will be further developed sustainably.

I wish the meeting a great success.