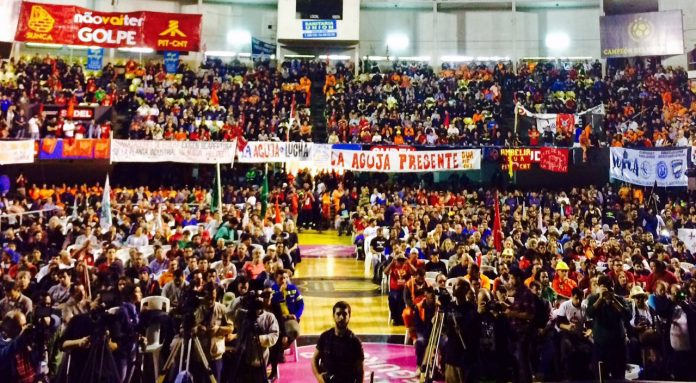 The VII ESNA meeting is carried out against the background of the deepening global crisis of capitalism and brutal imperialist offensive against the peoples of the world. In the region of Our America, the aim is to put an end to progress in the field of political change and integration, as for instance in the case of ALBA-TCP, UNASUR and especially CELAC, which excludes the US and Canada. This is evidenced by the imperialist offensive in Honduras and Paraguay, and now in Venezuela, Brazil and Argentina. In geopolitical terms, the intent is to limit the role of China, its rapprochement with Russia and the role of groupings such as BRICS. It is a clear example of hegemonism opposed to any attempt to bring multilateralism into international relations. The VII ESNA denounces the aggressive violence against the world’s peoples by capitalism in crisis. One million Syrian immigrants in a year and the murder of Honduran indigenous leader Berta Caceres are a testimony of repeated episodes of barbarism in the daily lives of millions of  male and female workers throughout the world. This also results in the massive migration movements in the region of our America and the South of the world. It can also be seen in the reactionary adjustment, which is taking place in Europe, in USA and Japan. The continuity of the blockade of Cuba is unacceptable. The crisis of capitalism is used to blackmail our people, to enlarge the inequality gap and to aggravate misery and exploitation of peoples. It is nothing but the old capitalist recipe reconverted into a response that should make it possible to continue subjugating labor, nature and society to capital. In some cases, working men and women are subjected to greater exploitation, through labor flexibility, informality and outsourcing, unemployment and underemployment; efforts are made to dismantle the labor movement or, if possible, to  restricting it, prohibiting the right to strike. In other cases, they deepen the looting of the common heritage of mankind, using it as inputs in production and distribution processes, as if land, water, oil, gas, energy, minerals, biodiversity, etc. , were just commodities. Not to mention the encouragement of consumerism to generate the surplus in a production model that is in crisis, even resorting to over-indebtedness of low-income population.

Inequality and impoverishment of our peoples are a direct consequence of the rule of capital and of its proposals to overcome the crisis, involving the manipulation of the social consciousness with the aim of creating a society of mass consensus orchestrated by the ruling classes.

In this respect, it is important to underline the role of concentrated media owned by large transnational multimedia consortiums. It is a comprehensive strategy that modulates the social culture of the many to affirm a common culture favorable to the requirements of those who rule and dominate contemporary society. It is therefore important to highlight efforts of communicational integration, among which one can mention Telesur. We pledge our solidarity with Telesur as a disseminating tool, and with any other expression of popular communication. From our ESNA meeting we denounce the ongoing process in the economy, in politics and culture, which implies the direct exercise of repression and criminalization of social protest. This strategy includes the militarization of society and is based on encouraging financial speculation and criminal capitalism, enrooted in drug trafficking, arms sales and human trafficking.

This is made possible through the complicity of economic power with the political and judiciary power, favored by various bureaucracies among which the old trade union model of reconciliation. Therefore, we argue from the ESNA in favour of a new model of social and trade union organization of working people, to promote unity in the struggle, to organize the defense of the democratic demands of those who live from the sale of our workforce.

We are aware that this is not enough and that our purpose must reach in the dispute over a new social, anti-colonial, anti-capitalist, anti-imperialist order and for socialism. This requires building a broader political and social front that fights for majority support in society. This situation unites us in rejecting the US foreign policy and imperialism in general. We demand the withdrawal of the Minustah from Haiti, the end of the blockade against Cuba and the withdrawal of the base at Guantanamo; we demand the end of assaults against the people of Paraguay, the end of colonialism in Puerto Rico and we struggle to promote the peace process in Colombia;  We also fight against discrimination on Palestine and the impediment to the full exercise of their rights by the Saharawi people as well as against all forms of impediment to the exercise of people’s full sovereignty  in the world.

The neocolonial system of free trade via TISA (Trade in Services Agreement), Pacific Alliance, Transpacific Agreement and the mega Treaty between Europe and the US (TTIP) are various forms of the capitalist counter-offensive in the region and the world. This is also true for the bilateral investment treaties or courts as ICSID (International Centre for Settlement of Investment) or the like. The deliberate upholding of public debt acts in the same way throughout the world. It associates the global financial system with speculation, exploitation and plunder.

Working men and women are the first affected by the implementation of a supranational organization based on free trade, subordinating the countries of the world to the hegemonic dictate of transnational corporations and the power of international organizations, which are run by the major powers of world capitalism, including the IMF and the World Bank (WB), the spearheads of the system of debt and impoverishment of millions of people worldwide.

That is why our struggle against the FTAA yesterday and today aims against any of these instruments of capitalist world domination, starting with the WTO, the IMF and the WB. We are aware that criticism of capitalism is not enough, and that we need to build our civilizing proposal. Therefore we call to struggle for socialism, which requires an assessment of failed experiences and ongoing processes to build the socialist goal that was proposed a century ago by Jose Carlos Mariategui.

ESNA emerged in 2008, as part of a process of emerging political change in the region. The VII Meeting  recognizes the cyclical difficulty of the present moment. Imperialism is going through a new stage and it is confronted with the advances of these processes of change in recent years. The United States and national rightwing forces perpetrate an onslaught against the conquests of the -workers and peoples. Destabilizing attempts in our countries, as well as electoral setbacks need to be faced with unity in action to defend the historical accumulation processes in our region. The VII Trade union Meeting Our America is committed to the defense of progressive processes in the continent and to confront any  attempt of a destabilizing coup that goes against our people. During the VII ESNA meeting, the current difficulties in the region have been recognized, be it the offensive of imperialism and the ruling classes of our countries, or errors and limitations in moving forward with structural changes aimed at liquidating the system of capitalist relations and to advance in the construction of socialism. Our challenge is to build the popular offensive for economic and social change, for food, energy and financial sovereignty, affirming the popular sovereignty over the integration process and for the people of Our America.

We call to struggle for:
1. World Day in solidarity with Venezuela, on April 19, 2016.
2. Continental days from 18 to 25 May 2016, fighting for the defense of democracy, sovereignty, integration, social rights and especially the defense of the right to strike and against the criminalization of social struggle.
3. Day for the withdrawal of troops from Haiti on June 1, 2016.
4. Solidarity with imprisoned trade union and social activists: Julia Amparo Lotan (Guatemala), Milagro Sala (Argentina), Huber Ballesteros, Oscar Lopez (Puerto Rico, kept prisoners in the US) and the 13 peasants in Curuguaty Paraguay, whose immediate release we demand.