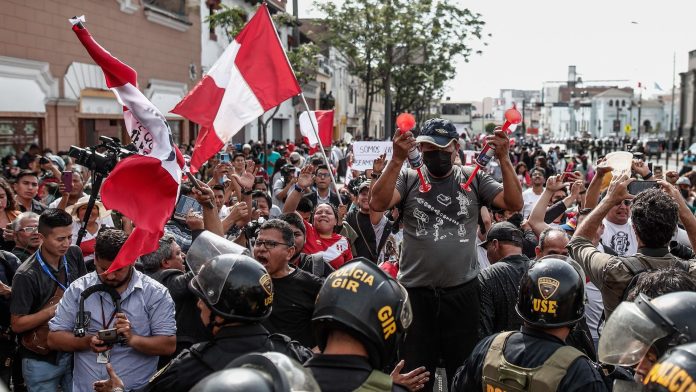 UITBB Statement on the political crisis in Peru

The current political crisis in Peru, has been caused by political conflicts from a sector of Congress towards the Executive branch of government, which has caused the people to take the streets and protest this situation.

The working people in Peru are the victims of this confrontation, with 27 deaths and hundreds of injured people nationwide, paying in blood the conflict between the Executive and the Legislative branches of the government, which causes social and political unrest, unemployment and hunger.

Now, with the ousting of the president Pedro Castillo, not only an economic recovery cannot be achieved but the unemployment rises which in turn causes a spike in crime rate.

It is clear that was is needed for Peru to move forward, is a swift solution to this political crisis, to listen to what the people in the streets want and stop delaying the changes that the country so desperately needs.

Especially in the construction sector, where UITBB’s affiliated organisation, FTCCP is active, all works which have been stopped need to restart, while at the same time the government needs to boost the sector through large infrastructure projects in the fields of health and education, among others. This will reduce unemployment, reactivate local economies and provide basic services to the population.

At the same time, we join our voice with FTCCP in asking for a new Public Works Procurement Law that can fight corruption and ensure compliance with providing workers’ benefits, also going a long way to combat the organized crime that extorts workers and businesses in the sector. Let us not forget that since 2011, these organised crime figures have assassinated 21 union leaders of the Federation of Civil Construction Workers of Peru (FTCCP) just for defending workers’ right to work.

We stand with FTCCP in international solidarity.