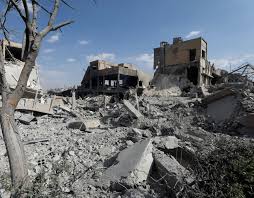 We have recently borne witness to yet another expression of imperial aggression against the Government and people of Syria. In a coordinated attack, the imperialist powers of USA, France and the United Kingdom have launched a missile attack against what they claim to be chemical weapons plants in Syria, without of course providing the world with any kind of hard evidence as to the validity of these claims.

UITBB sternly condemns such actions, which only result in the killing of innocent women and children in Syria and calls upon everyone to remember that these are nothing more than inner imperialist antagonisms, which are materialised in aggressive acts against a sovereign nation. The true causes of such imperialist interventions can be explained and understood only through a class-based analysis, which can also strengthen the response of the working class around the world against such blatant violations of human values.

The USA, Great Britain and France have used prefabricated data before, in Iraq and Yugoslavia, to divide countries, bleep people and reinforce their presence in various regions of the world. But behind such false pretenses, the real causes lie:

The imperialists do not care about the people. They only care about their profits and how to get a bigger share from the exploitation of the resources, oil, energy and energy routes. We call upon the millions of workers organised in the ranks of UITBB to mobilise in massive numbers against these new imperialist atrocities. We stand with the people of Syria, which has become a field of weapons testing by the imperialists.

Against the wars and the imperialists, against the monopolies which break us in peace and in war, we put forward our fight, based on workers’ interests. We the workers have common interests, the same needs, the same agonies and the same dreams. We are facing the same opponent, the capital and the forces that support it. We fight against NATO and the EU, which are not pillars of stability and security, as the capitalistic governments present them to be, but forces which bring destruction to people wherever they set foot.

We fight so that the imperialist NATO bases in Cyprus, Greece and the region in general, will close as they facilitate the military intervention against the peoples.

We express our international solidarity to all the people who are being tried by the imperialist interventions and the promotion of the capitalists’ interests. If we fight with all our strength against exploitation and imperialist wars, rest assured, comrades that in the end, the peoples will prevail!