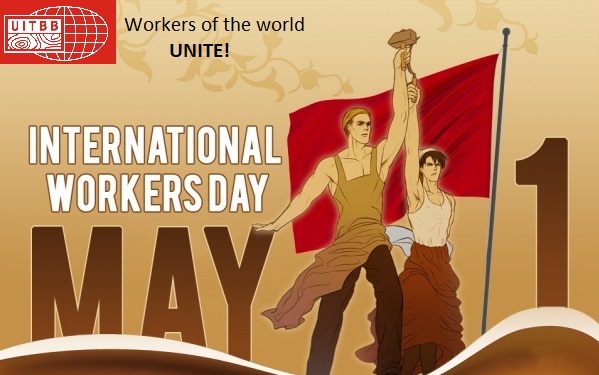 Labour Day is a beacon that sheds light on the path to a just society, a society we will always fight for. Improving the living and working standards for workers around the world and abolishing the exploitation of humans by humans through our class-oriented struggle, is what underlines Labour Day importance today, more so than ever, as we live in a world where imperialist wars and interventions are constant, and where poor people pay the price in blood.

The Trades Union International of Workers of the Building, Wood and Building Materials Industries (UITBB) honours Labour Day 2022 by saluting the millions of workers in the construction sector, who are struggling on a daily basis, promising that it will always be on the forefront of those struggles with the workers, for the workers.

We must stand together, all workers of the world, and repel the attacks of the capital, assisted by all the reactionary forces and neoliberal governments around the world, which only care about profits and do not have any ethical reservations. We must fight against layoffs, reduction in salaries and pensions, privatizations, precarious labour and exploitation of vulnerable groups of workers such as immigrants.

In the spirit of that brave workers’ uprising in 1886, we need, now more than ever, to organise on a global scale and rise up again as one, mighty force, armed with our class-based solidarity and ideology, enlightening people and making the world understand that there is no future in capitalism.

UITBB, as an international, progressive trade union movement in the construction sector calls upon all its affiliates and friends around the world to honour the day by organising activities, sharing the message and helping the workers.

We will be victorious, comrades, as the future was made bright by the sacrifices of those who came before us. We honour them, and we honour Labour Day 2022.