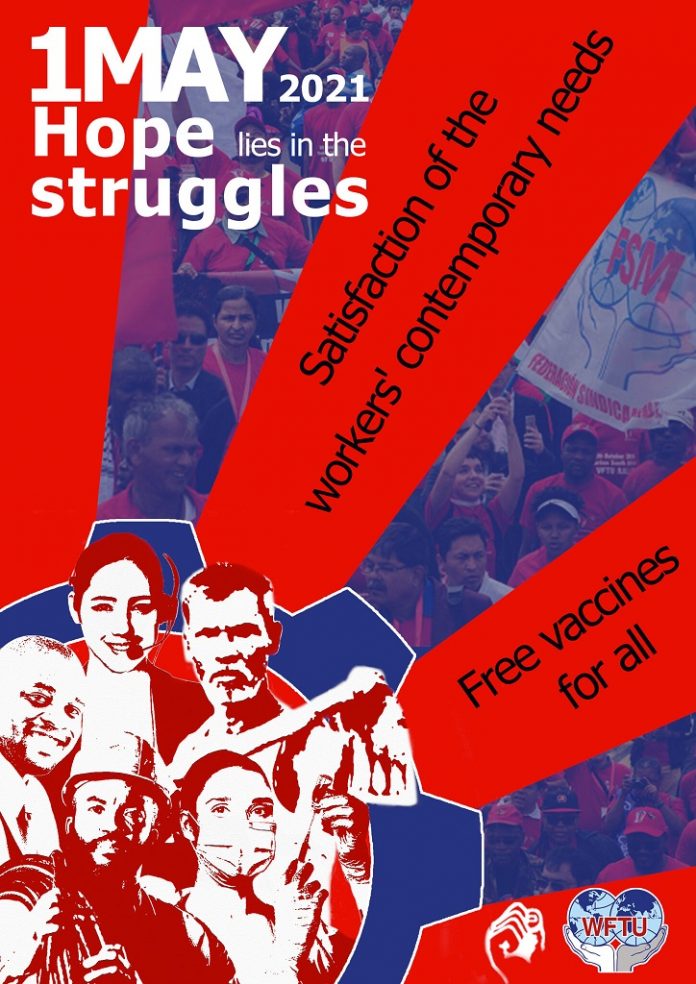 Labour Day marks the undying struggle of the workers throughout the world for the improvement of their living and working conditions and for the abolition of the exploitation of humans by humans, today more so than ever. 135 years since the bloody uprising of workers in New York asking for 8-hour working days and the Haymarket affair, the message of those workers shines brighter than ever. The Trades Union International of Workers of the Building, Wood and Building Materials Industries (UITBB) honours Labour Day 2021 by saluting the millions of workers in the construction sector, who are struggling on a daily basis to improve their working and living conditions.

They are asked to do so amidst very difficult situations due to the COVID-19 pandemic which is still ongoing, with grave consequences for all the people in the world. Because of strict measures imposed by governments, lockdowns, forced closures of business and so on, the popular strata and especially vulnerable groups, are finding it exceedingly difficult to make ends meet. What worsens the situation even further is the fact that the forces of the capital with the support of reactionary forces and neoliberal governments around the world, are taking advantage of the pandemic and have started attacking the vested rights of the workers. We have already witnessed layoffs, reduction in salaries and pensions, privatizations in the public health sector, an increase of precarious labour and so on, with the clear aim to make the poorer layers of society pay for the crisis.

What needs to be done now, in the spirit of that glorious workers’ uprising in 1886, is to organise on a global scale and rise up again as one against the capitalists, with our mighty weapons of class-based solidarity and class-based ideology. More and more people each day understand that the capitalist system cannot satisfy the needs of the people, especially in a time of crisis so we need to be ready to take advantage of that.

Given the above, the message of Labour Day is more prominent than ever this year. UITBB, as an international, progressive trade union movement in the construction sector, is at the forefront of all struggles, enlightening the workers and preparing them to defend their rights against these attacks. In that spirit, and in the light of the glorious Labour Day message, UITBB calls all its affiliates and friends in every corner of the world to honour the day in any way possible, organize their common actions in all continents, for the emancipation of the working class and for the creation of a new, just society, because this is the future of humanity. This is the only way forward, comrades, and this path will always be illuminated by the sacrifices of those pioneers who led the way.

On behalf of UITBB Secretariat