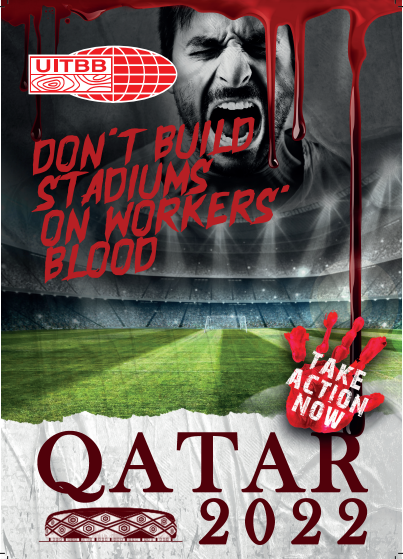 Since 2015, the Trades Union International of Workers of the Building, Wood, and Building Materials Industries – UITBB, has been speaking up, organising campaigns and protests, and communicating with all relevant national and international bodies such as FIFA, on the extremely serious issue of deaths of migrant workers in the worksites of Qatar for the World Cup 2020. At the time, the death toll was 1200 workers.

Despite all of our efforts since then, no measures have been taken and as a result, 6 years later the blood continues to flow non-stop, with thousands of dead that no one will miss except their families. Very recently, the world was ‘shocked’ to hear about the 6,500 dead workers in the construction projects of the stadiums. But when thousands of spectators, flock to Qatar’s impressive stadiums to watch football, they should know that they are built -literally- with blood.

The fact remains that if they had done anything so many years ago, the lives of these people would be protected. Symbolisms with ‘red cards’ to FIFA are not enough. What is needed, is a dynamic and organized reaction from all the progressive forces to stop this sacrifice of construction workers for the profits of few multinational companies!

The conditions of migrant workers (mainly from India, Nepal, Bangladesh and Pakistan) at construction sites are the least inhumane. They work 12 hours a day, without safety and health measures, under unbelievably high temperatures in the Qatari desert, dying from the inhuman treatment and working conditions imposed by the employers who have confiscated their passports.

UITBB takes the initiative, under the slogan

to raise the issue in all international and local forums and institutions, with the ultimate goal of taking, at last, the appropriate measures so that this phenomenon can be mitigated as much as possible. We call upon all our organisations around the world to contact their respective governments, football authorities, FIFA, and any other relevant body and demand an intervention to the Qatari Government for the immediate end of these practices of human exploitation, which are nothing more than modern-day slavery.