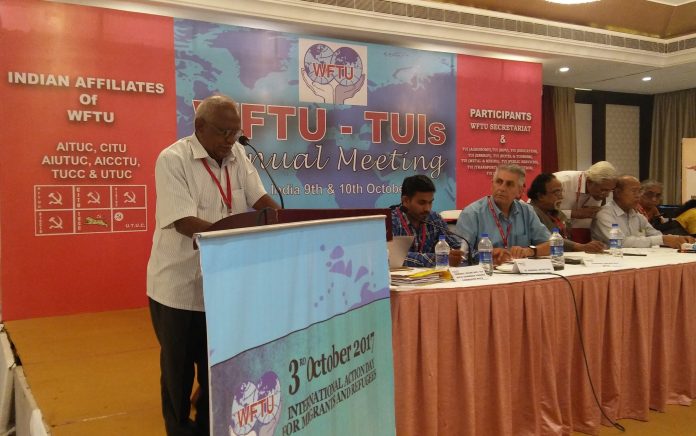 From UITBB’s participation in the WFTU-TUI Leaders Annual Meeting in Kolkata, India 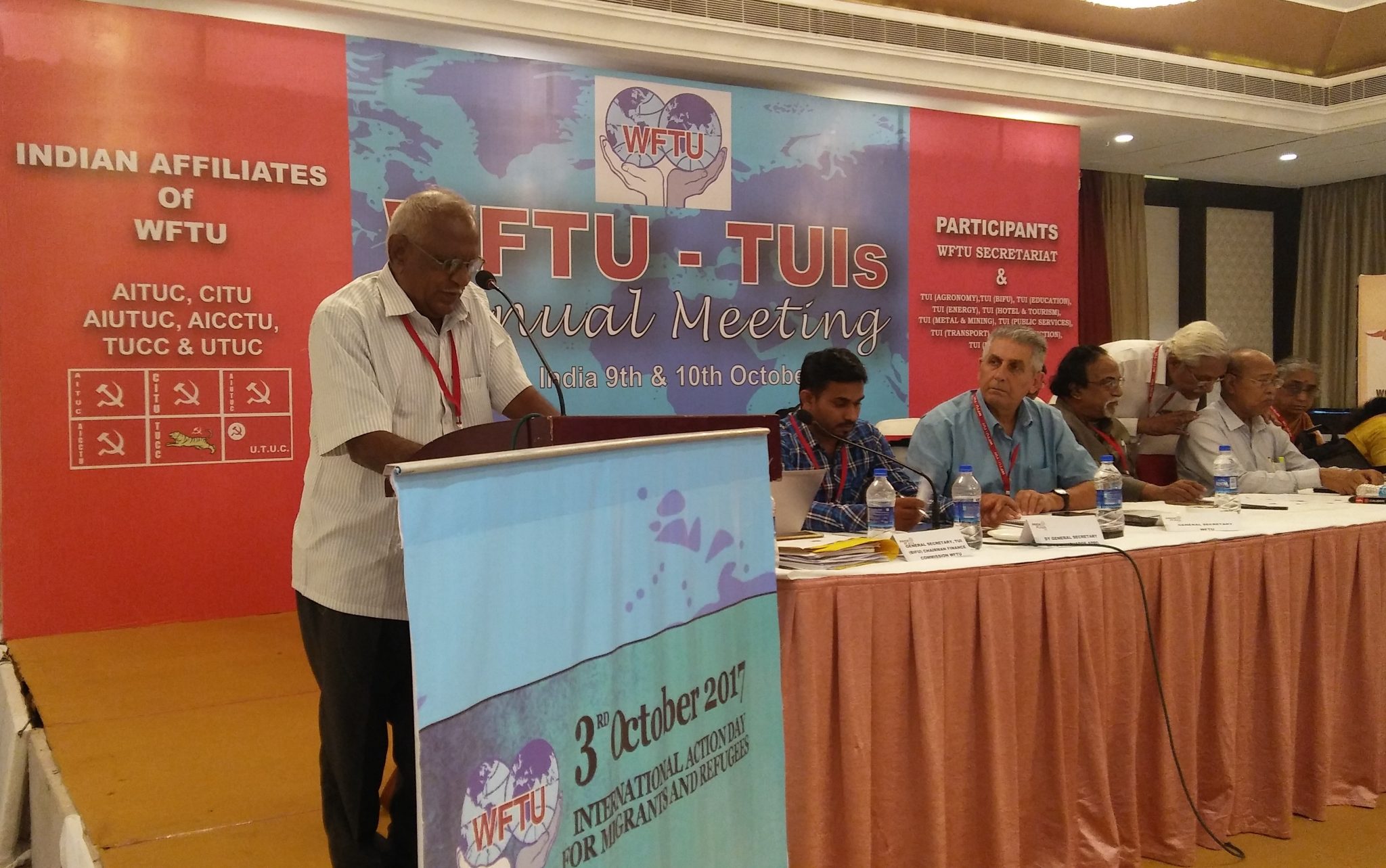 Comrade Ramasamy Singaravelu, Member of the UITBB Secretariat, took part in the annual WFTU-TUI’s meeting in Kolkata on Oct 09 2017. In total, nine TUI representatives took part in the meeting. Along with Comrade George Mavrikos, General Secretary of WFTU, two Deputy General Secretaries (Comrade Deve Roye and C.H.Mahadevan), Comrade C.H.Venkatachalam (Chairman of the Finance Commission) also took part in the meeting. In total, 61 comrades attended which were the leaders of CITU,AITUC, AICCTU and UTUC, other affiliates of WFTU from India etc.

Comrade Singaravelu extended warm revolutionary greetings on behalf of TUI (construction) UITBB. He reminded the saying by Comrade Che Guevara that “We are unknown to each other; but if you fight against injustice in any part of the world, you are my comrade”.

He then went on to say that UITBB has 30 affiliated Unions around the world with the Head Offices being in Cyprus and is on a good course to be re-organised and strengthened. UITBB’s Secretariat Meetings are being held every two years (Cyprus in 2015 and Athens 2017), while every year, UITBB holds an Asia-Pacific region (India 2017) and a European regional meeting (Athens 2017). The following Executive Committee will probably take place in Cyprus in 2018.

Comrade Singaravelu also talked about the numerous solidarity messages that were sent from UITBB to construction workers in various countries, including the 2017 April 6 Delhi Rally organised by CWFI.

He then went on to discuss the problems of workers in the developing countries are facing, especially as far as unemployment and safety are concerned. Comrade Singaravelu also focused on the issue of migrant labour especially for India and the conditions of slavery these workers face.

He finished by reaffirming UITBB’s commitment to WFTU and its struggle to improve the workers’ conditions while at the end of the meeting, the ‘Kolkata Conclusions’ were adopted unanimously.

The 2-days WFTU – TUIs meeting concluded with grate successful today, 10 of October 2017 in kolkata, India. During the meeting delegates from all the sectors discussed for the situation and conditions that the workers face to the various sectors and how the international class oriented trade union movement be organized for its counter-attack in favor of the working class and the cover of the interests of the workers. 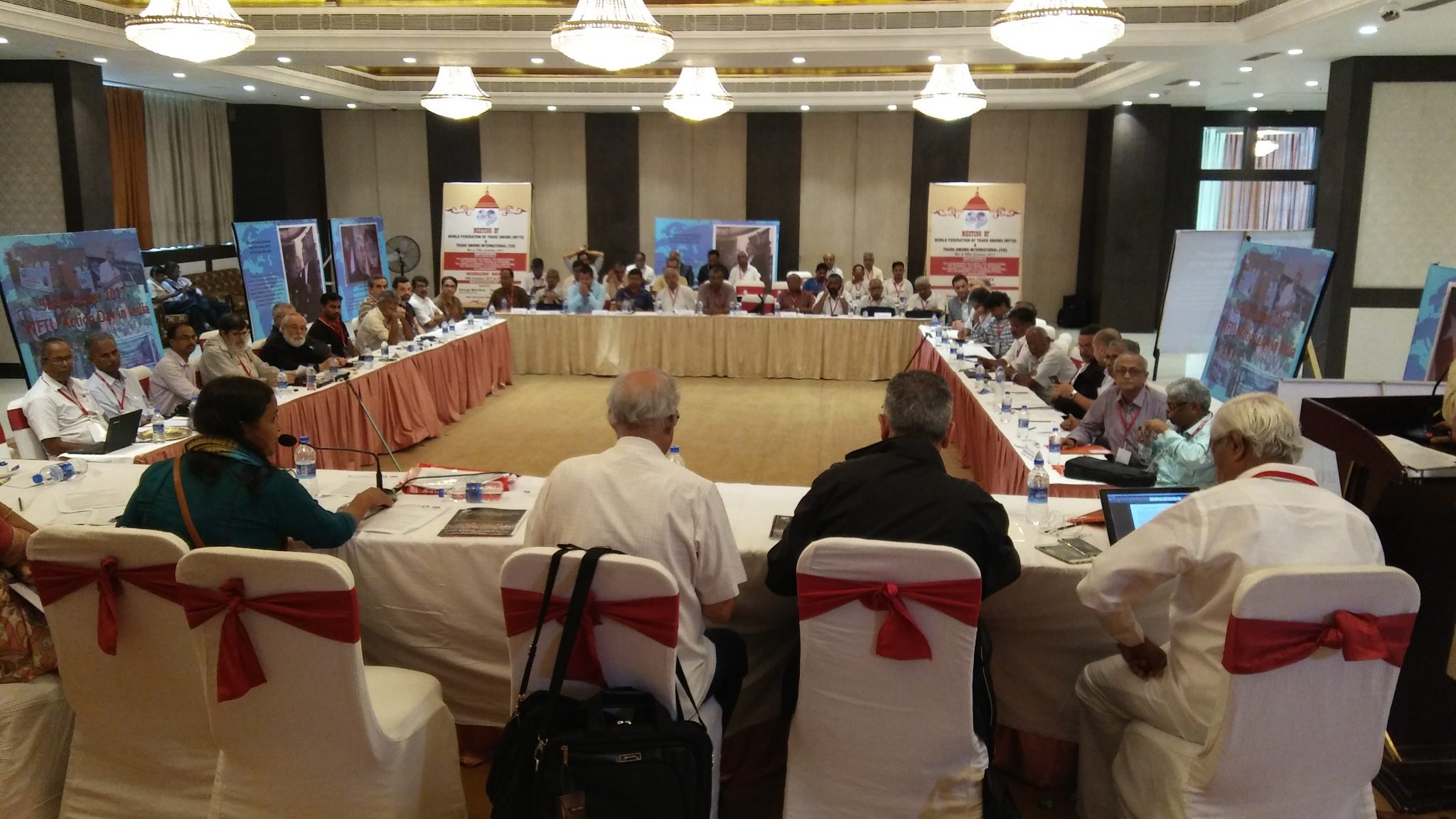 This WFTU – TUI annual consultation meeting is being held around one year after the 17th World Trade Union Congress in Durban, South Africa and around five months after the meeting of the Presidential Council of WFTU in Havana, Cuba. It is being held in a situation when the systemic capitalist crisis is deepening and the capitalist class continues its attempt to protect and increase their profits by shifting the burdens of the crisis on to the working class and other sections of the toiling people. All the hard won rights and benefits of the working class are under attack.

This onslaught has to be fought nationally and internationally. TUIs have a big responsibility in leading this fight. They have to develop and strengthen sectoral and coordinated movements in their respective sectors throughout the world under the guidance and with the support of the WFTU.

The ideology of the WFTU, the understanding of the 17th Congress of the WFTU about the world situation and the role of the class oriented trade unions have to be taken to the grass root level workers in our respective sectors. 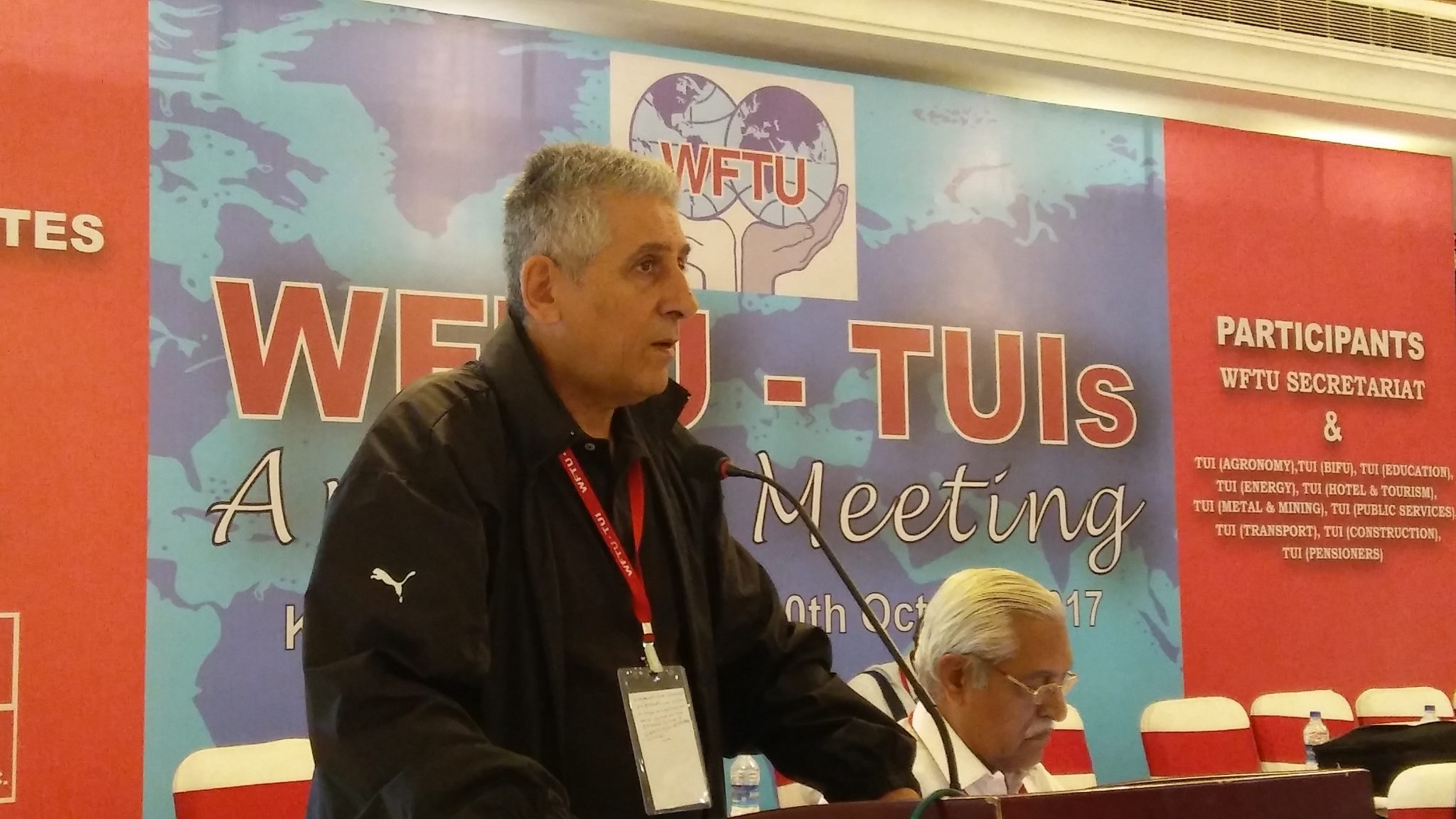 TUIs are major bodies of class oriented trade union movement. They have the fundamental responsibility of defending the rights of the workers in their respective sectors including the trade union rights, of linking the workplace with the WFTU.

To ensure this, we have to take up the following tasks:

• All TUIs to meet regularly, discuss the developments in their industries, the conditions of the workers in their industries and their struggles in various countries at the global level. Mechanism for regular sharing of information among all affiliated unions across the globe to be evolved and effectively implemented.
• Support the struggles of workers in their industries across the world, plan solidarity actions and implement them; inform WFTU Secretariat about these struggles for broader support and solidarity
• Plan activities that would help ideological development of the working class in their respective sectors
• Review implementation of decisions and progress in all meetings and formulate activities accordingly

• Strengthen coordination among the various affiliated unions of the TUIs and between the TUIs and the WFTU to develop effective global resistance to the global onslaught of the capitalists
• The 150th year of publication of ‘Das Capital’ to be observed to spread awareness about the inherent exploitative nature of the capitalist system and raise the consciousness of the workers on the need to change the system and the role of the working class in ending exploitation.
• TUI affiliates are to take up the day to day problems of workers, analyse objectively from working class angle the cause of problems and organise struggle to fulfil the demands of the workers.
• TUIs to work for developing unity with the farmers, students and self employed people.
• TUIs have the task of promoting international solidarity with workers from other sectors and countries.
• TUIs must pay attention to the diabolical developments of political refugees and economic migrants facing inhuman atrocities internationally which is directly linked to barbarity of imperialism and capitalist crisis.
• TUIs must act as powerful lever of struggle against capitalist barbarism pursued by monstrous multi-national corporations (MNCs).
• To take precise efforts to improve the functional position of the TUIs, with specific attention to strengthen the fund position of the TUIs in order to expand their function and activities.
• To undertake study at regular intervals to trace down the development in industries with facts and figures with a view to educate the cadres and masses internationally and send the reports to WFTU Secretariat.
• To establish co-ordination between the Regional Offices and TUIs in each Regions, so as to help each other and the implementation of collective programmes. 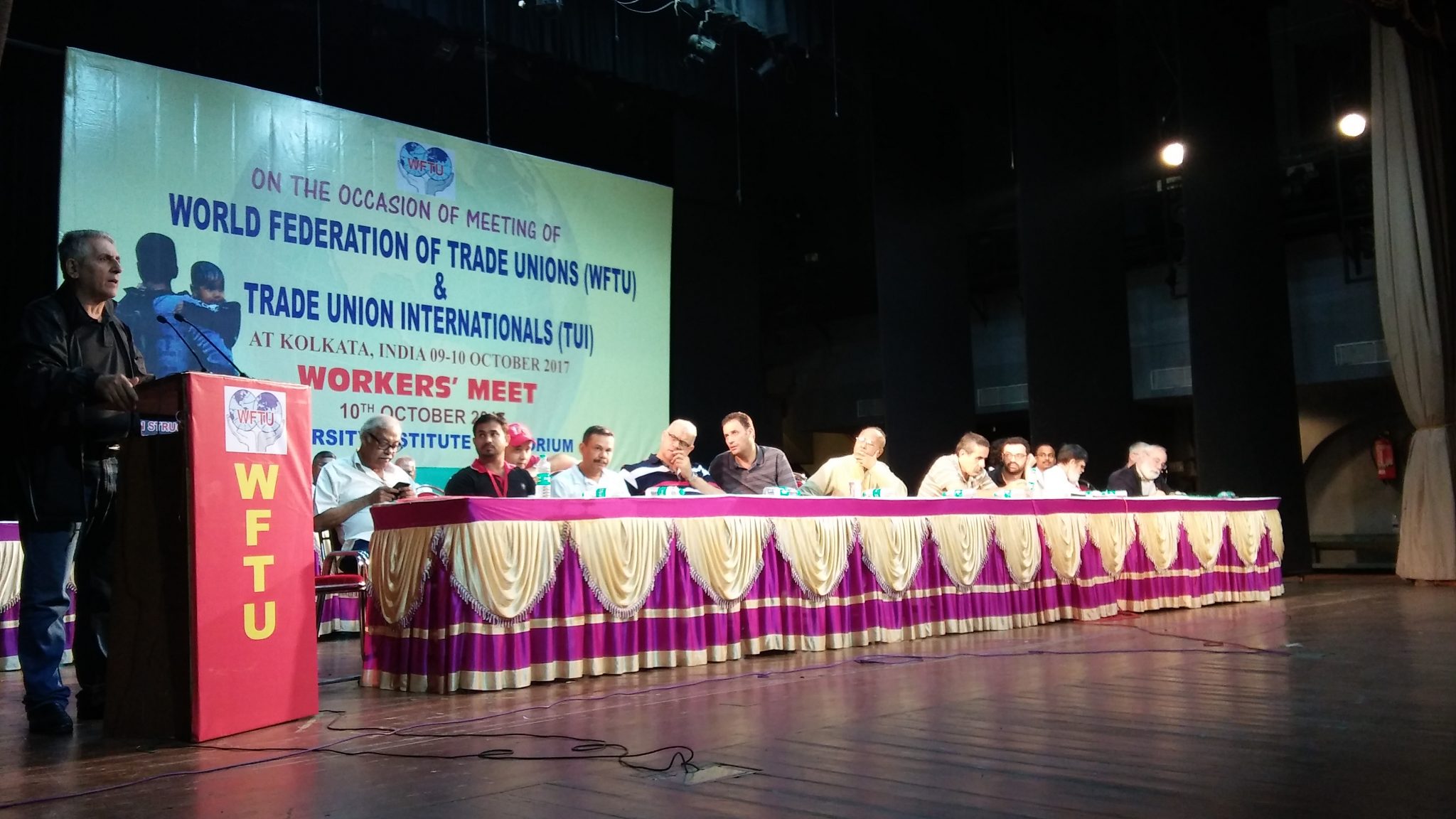 • TUIs must continuously promote the WFTU amongst the grass root level workers and unions and bring them into the WFTU family. This should be an important parameter to judge the organisational success of all the TUIs.
• TUIs must participate in the activities of the different forums of WFTU and implement the campaign and action programmes time to time decided by the WFTU including observation of the Action Day on 3rd October every year
• TUIs must democratically elect leaders in their Congress ensuring that the new cadres and leaders are active and effective in discharging the responsibility of the office they hold in the respective TUI. 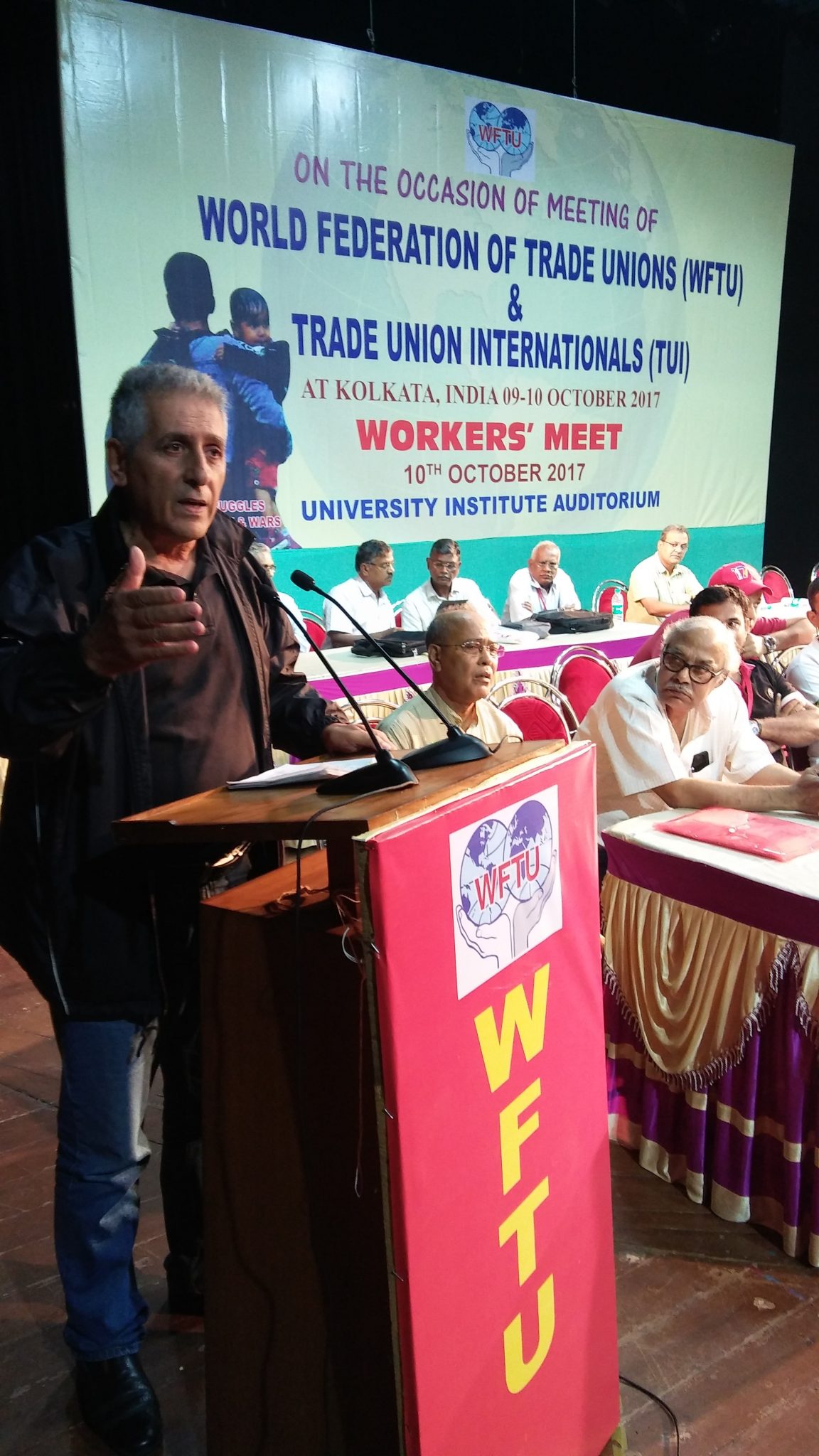 This meeting held at Kolkata, India on 9-10 October, 2017 with representatives from Nine TUIs requests the WFTU Secretariat to concretise the various proposals and action programmes by the TUIs. The Secretariat of WFTU may ensure communication to the TUIs regularly and extend class oriented ideological and organisational support to the TUIs.