Construction works for the Olympic and Paralympic Games such as stadiums, facilities, hotels, commercial buildings, are in full bloom in Tokyo area where the Games will be held in two years’ time. 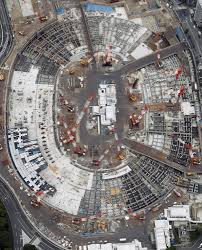 Meanwhile, in July 2018, a Construction workers union got a consultation from a rank-and-file worker. He informed them that “the air conditioner is not installed in the break room for workers.” This information came from a worker who works at the construction site of a high-rise building in the center of Tokyo. The primary contractor is the leading general contractor in Japan.

In July, temperatures often exceed 30 degrees Celsius in Tokyo and heat strokes and dehydration can endanger workers’ lives. The contacted union has negotiated and demanded with both the principal company and the supervisory agency to address this issue.

Occupational accidents have also occurred at construction sites of Olympic-related facilities. In the construction site of the National Stadium, which is the main venue of the Games, a man who worked at the company which is dealing with the construction progress management work, committed suicide due to overwork. At the athletes’ village construction site, a worker who engaged in crane work was killed by an accident because he was caught between mobile cranes. In both cases, the primary contractor is a leading general contractor, but the occupational health and safety measures are inadequate. 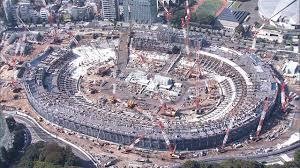 The working conditions of construction workers in Japan are also very bad. The average wage in the sector is 76% of the overall average (average for all industries is 5.49 million yen (approximately 42,000 euro annually, but the average for construction is 4.17 million yen (approximately 32,000 euro) according to the Ministry of Health, Labor and Welfare Ministry, 2016). Moreover, the annual working hours are longer than the average by 17%. (1783 hours in all industries, 2012 hours in construction)

Under these circumstances, the number of new workers in the construction industry has declined, dropping to approximately half of what is was two years ago. Currently, the government statistics show that the number of workers who work in the construction industry is 4.92 million yen in 2016 (approximately 38,000 euro), but the construction companies which are authorized by the government are 470,000. The overwhelming majority of employers in the sector are small and medium-sized enterprises, which creates a multilayered subcontracting structure.

As a result, the working conditions are bad, and the union density in the industry is also below than 20%. Since workers are divided by each small enterprises, it is not easy for labor union to organize them, and this seems to be one of the reasons for low-wages.

Currently, while construction labor unions in Japan, including the metropolitan area, are in the progress to strengthen their organization in order to gain some positive achievements. In addition, the procurement policy which is stipulated by the Olympic Committee clearly states “proper working conditions”, and we are engaged in negotiations and campaigns against primary contractors who fail to adhere to that.

Construction business associations consist of major general contractors in Japan, recognize that there will be a shortage of skilled workers in the future. In light of this crisis, they said that it is important to improve working conditions, and especially to increase wages, while skilled workers should work fewer hours.

We are committed to our campaigns and struggles to intensify negotiations with employers and make demands to the government.