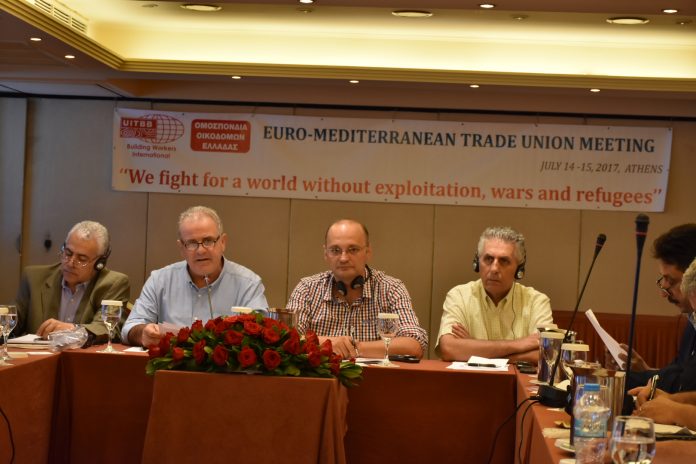 Speech by Michalis Papanikolaou, UITBB General Secretary at Euromediterranean Meeting in Athens, July 2017. You can see the video and the text below:

First of all, I would like, on behalf of UITBB, to thank the comrades from the Federation of Construction Workers and Allied Trades of Greece, for their hospitality, and the chance they are affording us to have this very important meeting in their country.

Comrades, the workers around the world are suffering from the consequences of the spread of imperialist wars around the planet. At the same time, they are under a violent attack which is characterized by anti-labor measures such as salary and benefit cuts, challenging of trade union action and abolition of the right to go on strike. 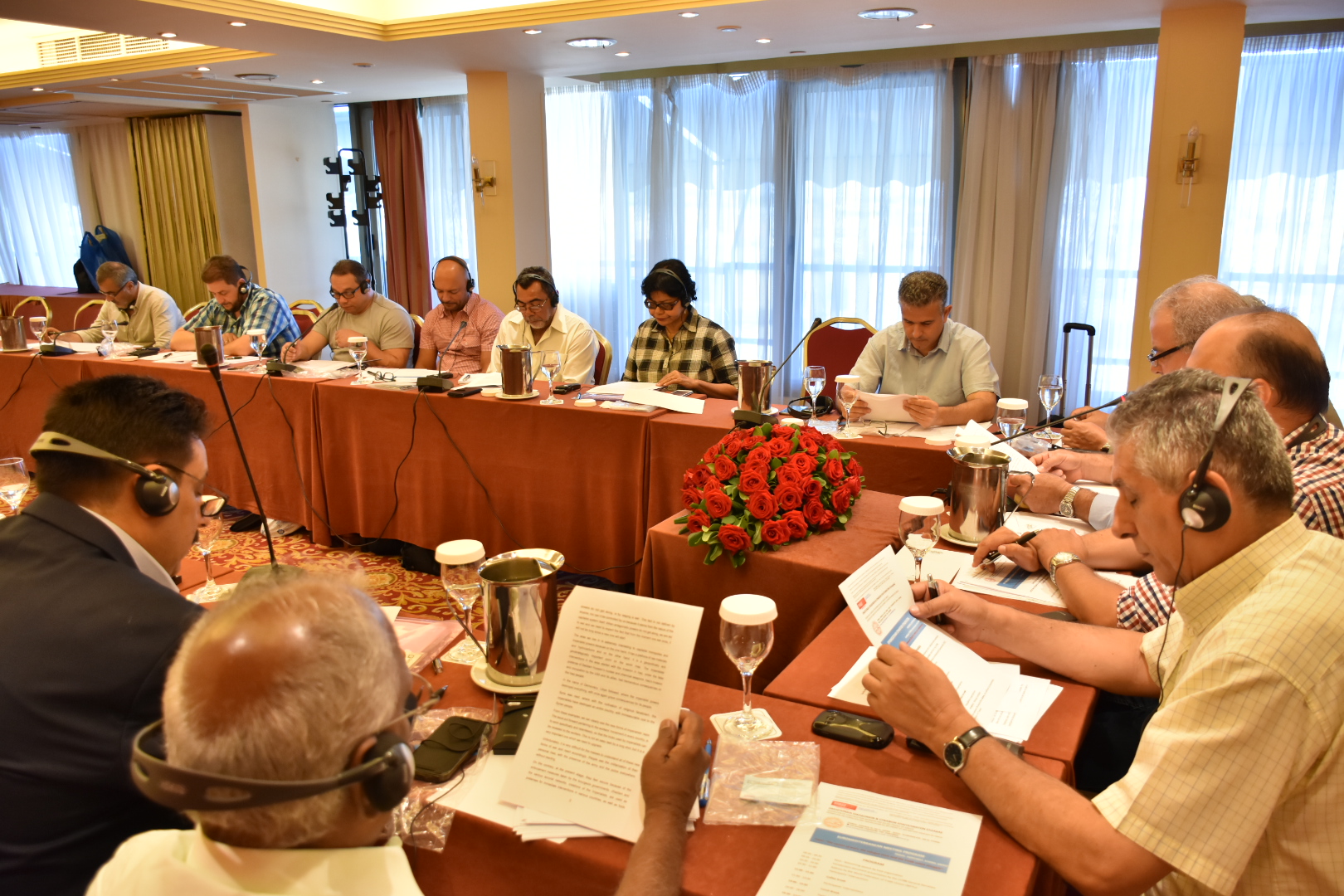 Comrades, we have decided to host this meeting because we believe that, in the views that will be put forward and the ensuing discussion, we will be able to better comprehend the true causes of the wars today.

Additionally, after we illustrate these true causes, we need to organize our work among the workers in a better way, aiming to touch and change their consciousness or their approach, and point to those who are to be blamed, the imperialists.

At the same time, through this action, we need to prepare the workers ideologically and politically, for the stance the Workers’ Movement should have before, during and after each imperialist war. 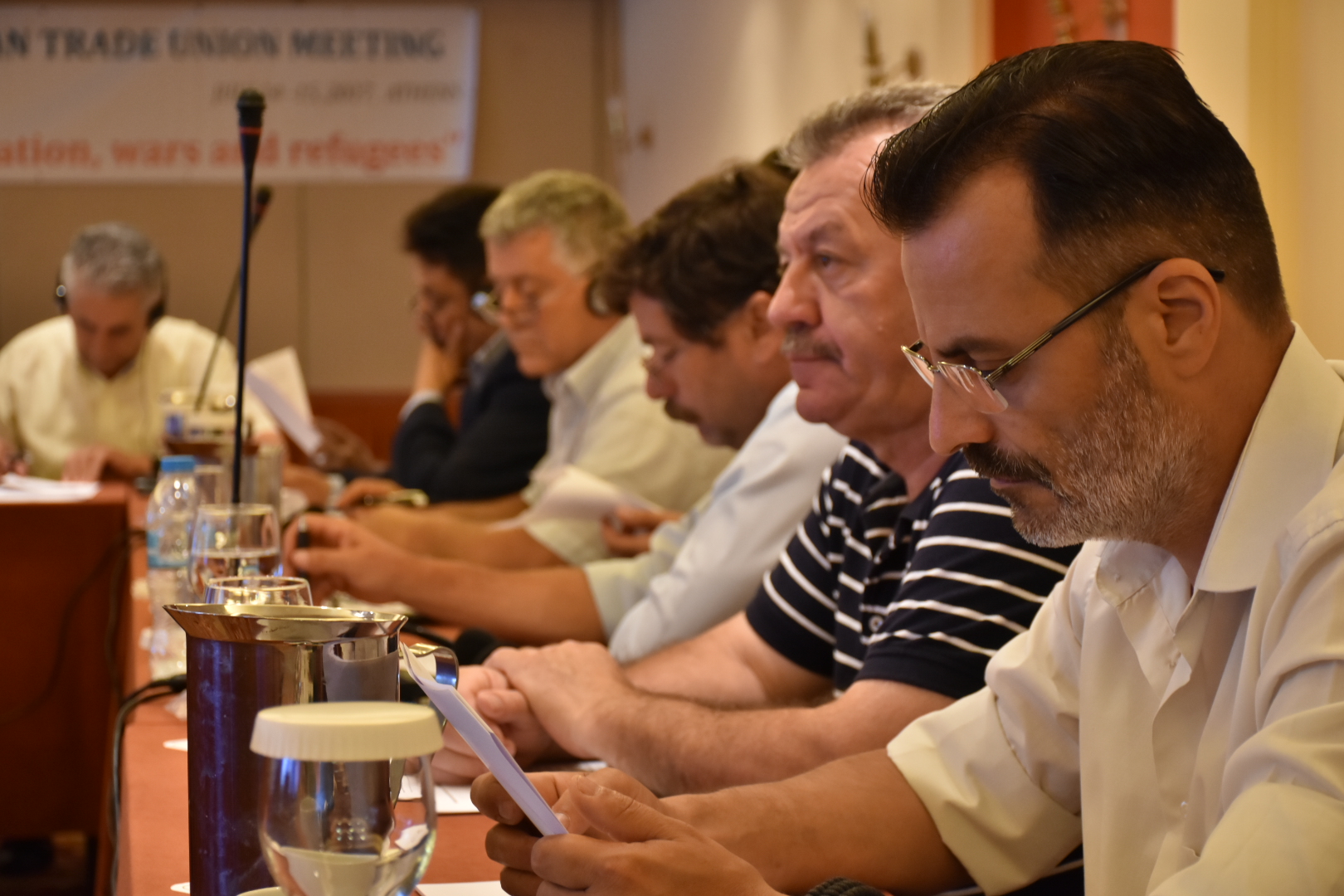 Monopoly capitalism is at its highest stage, imperialism. The deep and long capitalist crisis leads to a sharpening of endo-imperialist antitheses and antagonisms. The only solution for increasing their profits when Imperialist powers do not get along, is by waging a war. This fact is not defined by anyone, nor can it be controlled by us because it stems from the nature of the capitalist system itself. When antagonistic powers do not get along, we are led to war and we need to expect the fact that from the moment one war ends, it will not be long since a new one will start.

The area we live in is extremely interesting to capitalist monopolies and imperialist powers because on the one hand, it has a plethora of raw materials and hydrocarbons and on the other hand, it is a geopolitically and geostrategically important point on the world map. The imperialists’ interventions in the area started with the invasion in Iraq, under the false pretense of Saddam Hussein’s nuclear and chemical weapons. Iraq’s invasion and occupation by the USA and its allies, had tremendous consequences on the Iraqi people.

In the name of Democracy, Libya followed, where the imperialist powers destroyed everything, with once again grave consequences for its people.

Syria was next, where with the cultivation of religious fanaticism, the Imperialists have destroyed an entire country, with immeasurable cost to the Syrian people.

From these examples, we can clearly see the new forms of imperialists’ wars. The issue put forward pertaining to the workers’ movement in every country, is to work specifically and relentlessly, so that the tricks used by imperialists can be revealed to the workers. This is not an easy task by a long shot, but it is a very important one which we need to upgrade.

Unfortunately, it is very difficult for the masses to understand all of these new forms of war and react accordingly. People see the militarization of their personal lives, with the presence of the army and the police everywhere, without reacting.

On the contrary, at the present stage, they feel secure because of the enforcement measures taken by the bourgeois governments. Jihadism and the various terrorist networks, creations of the Imperialists, are used as pretenses for immediate interventions in various countries, as well as tools that will be used as a reason by the bourgeois governments now and in the future, to suppress any mobilizations by the workers against their interests.

It is the same everywhere; the only thing that changes is the pretense. The only ones who benefit from this situation are the imperialists, while the peoples of the affected countries bury their dead, become impoverished and are forced to become refugees. 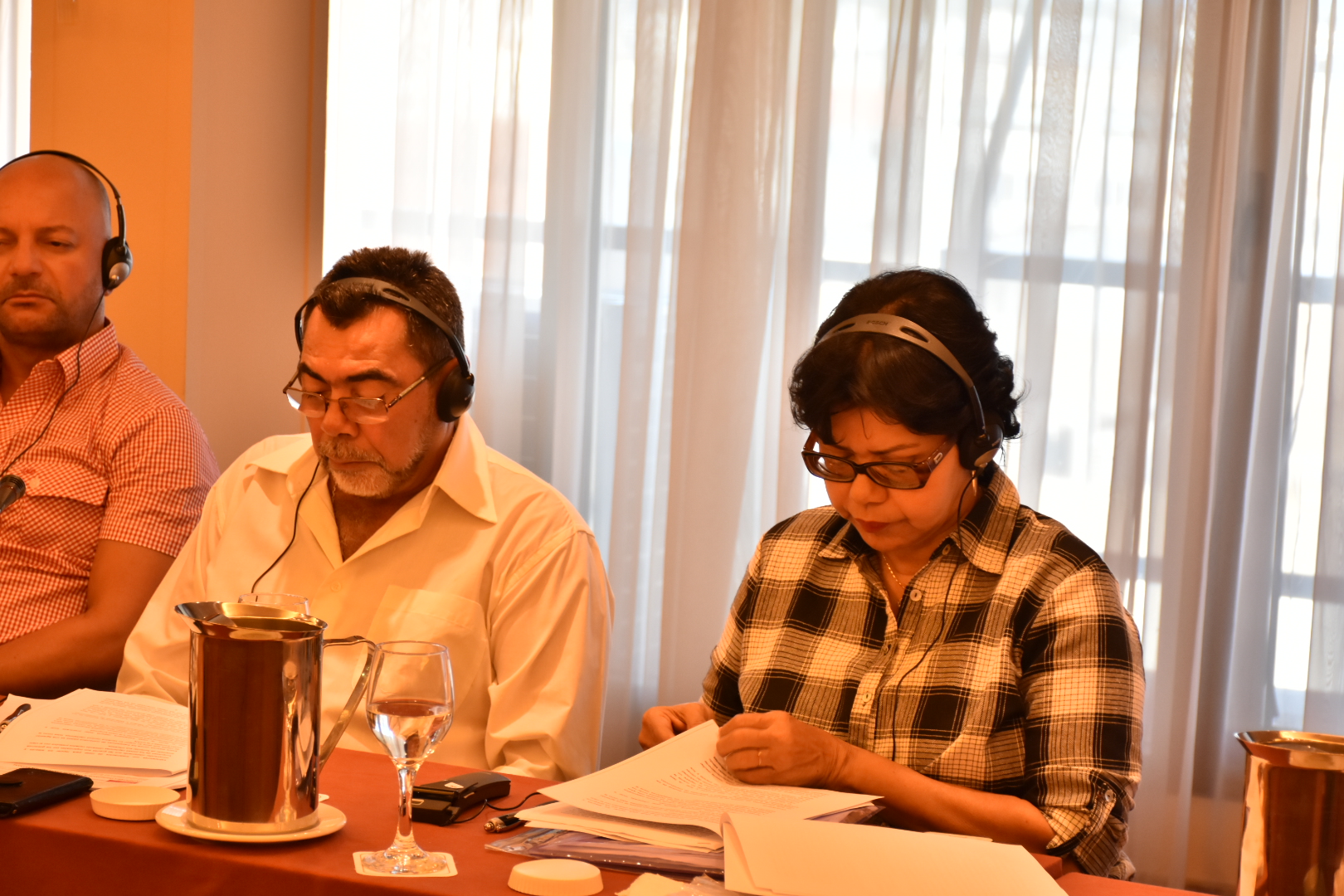 In April alone, the number of the dead refugees in the Mediterranean Sea has surpassed one thousand, which is a record for this period, and as much as the European Union sheds crocodile tears for this tragedy, it does not fool us, since at the same time the EU is participating, actively or passively, in interventions that destabilize entire regions in Africa and the Middle East.

Given the participation in the meeting today of comrades from Syria and Lebanon, we would like to express once more, our endless solidarity to the people of these countries, and at the same time, to promise that we will intensify the class-based struggle on a national and an international level, so as to be able to achieve the goals we have set as an International Trade Union Movement, in order to eradicate the basic causes of wars.

Generally speaking, the stance of the Workers’ Movement towards war is extremely important, just like its basis and the organization of the struggle, which guide the workers along the class-based line to repel the attacks and clearly realize that the wars are organized by the bourgeois governments of the various capitalist countries under different pretenses, clearly to promote their interests.

This attack against the workers in various countries is a class-based attack and it originates from the various capitalist centers, such as the European Union and NATO. 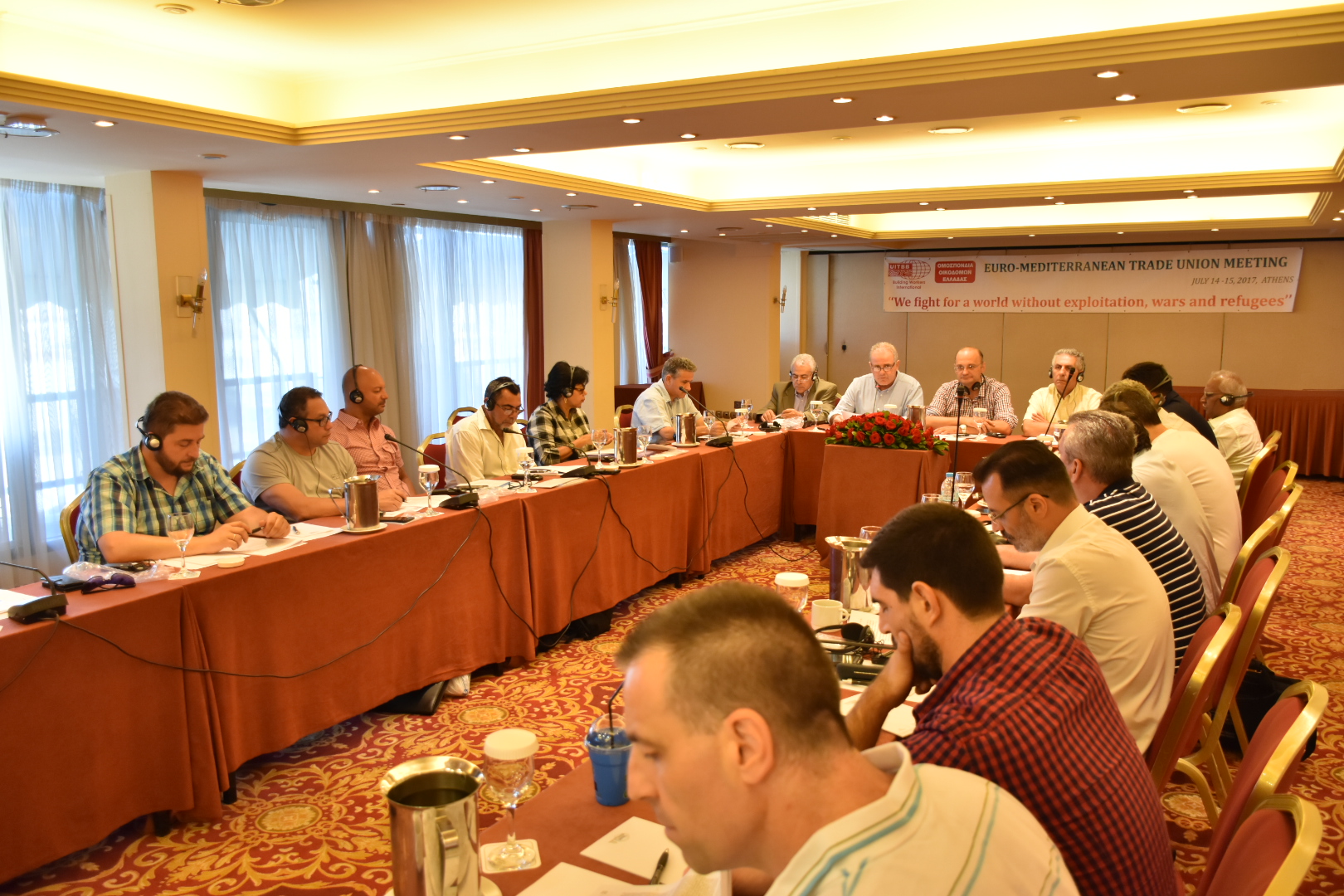 Thus, the working class should be prepared both on a local and on an international level to deal with the bourgeois class.

Our ideological and political background, our organizational state and our international solidarity, should be on the highest possible levels, so that, given the right circumstances, to be able to take matters into our own hands and guide the workers to salvation and the creation of a new society. 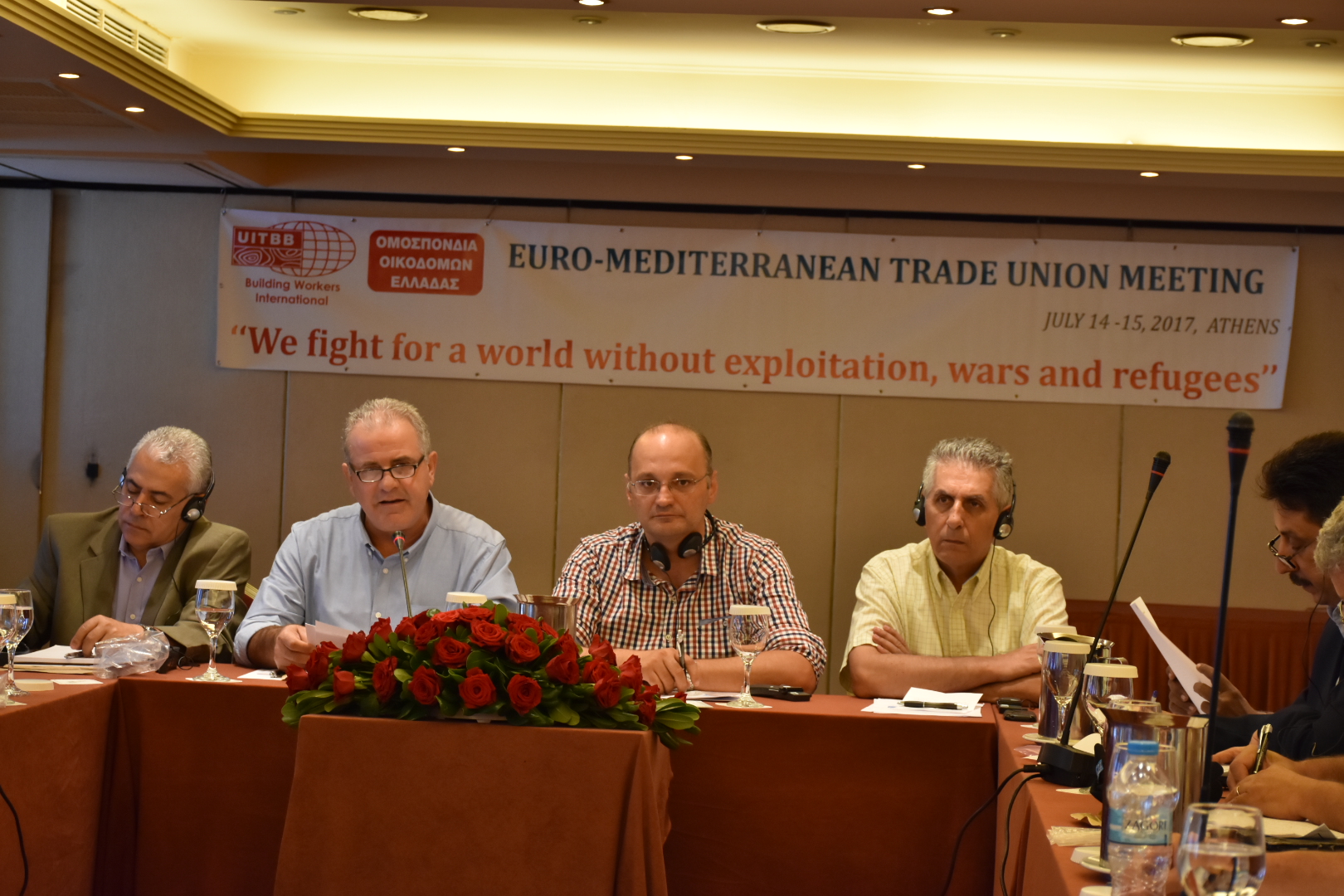 In my intervention on behalf of the International Union of Builders, I would like to also stress the following: 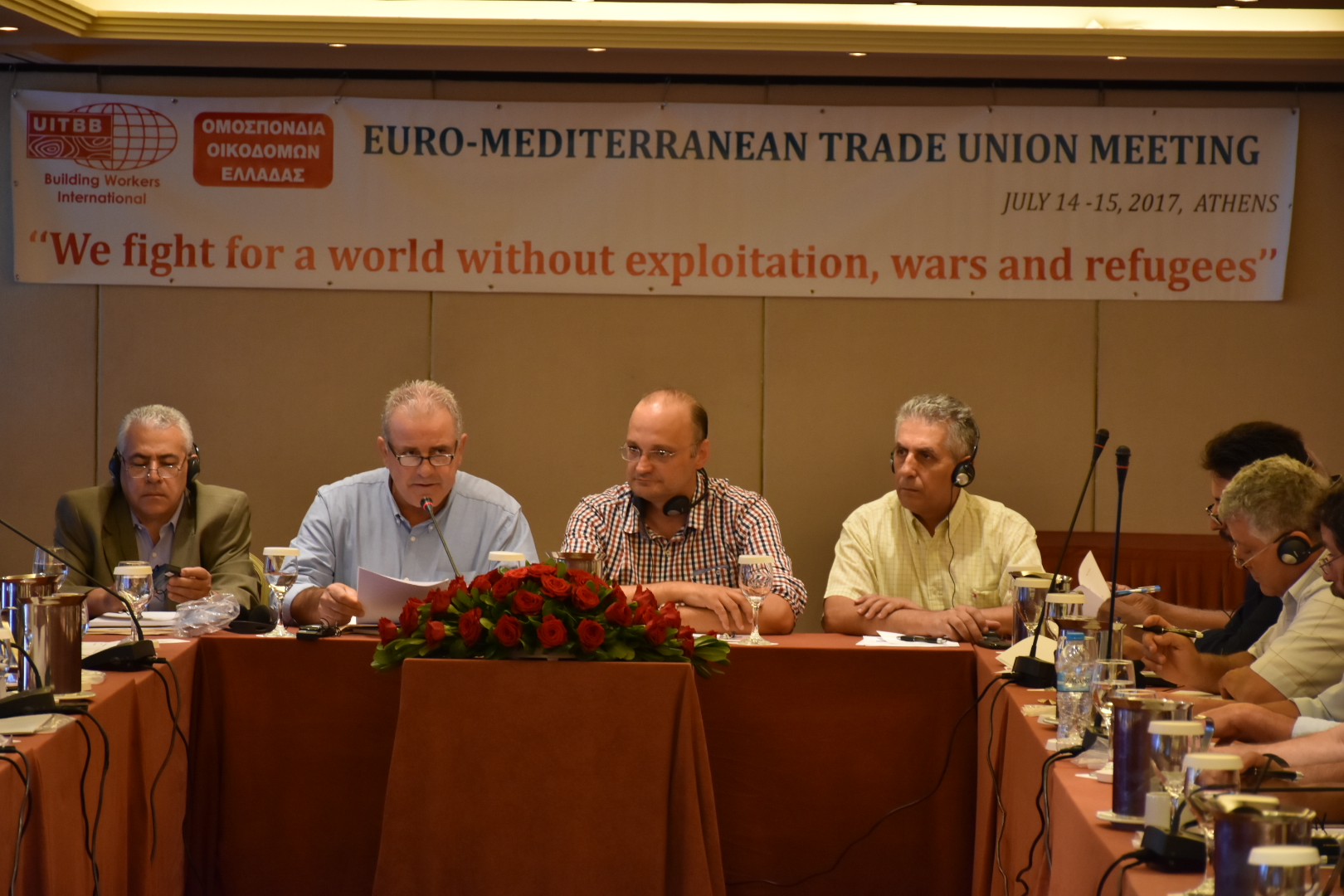 Because the working class should keep a common, class-based line in all countries, UITBB pledges that it will continue its organized efforts towards this goal, dedicating all of its available power, aiming to fight nationalism, chauvinism, and to develop solidarity with refugees, immigrants and all the peoples of the world alike.