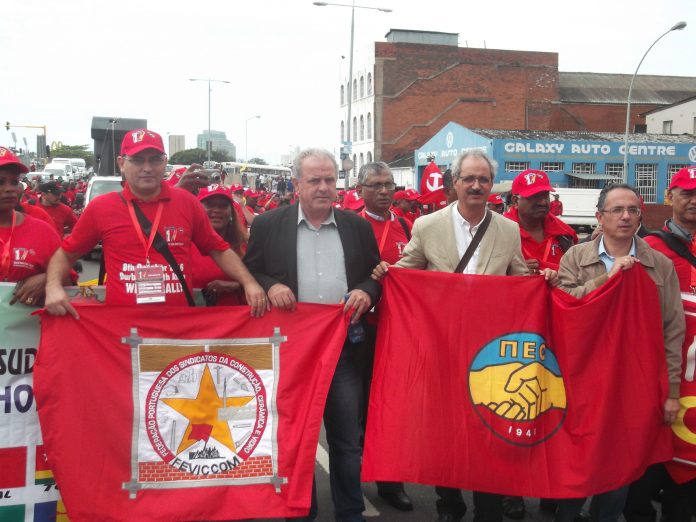 The Congress’ theme, which was hosted by COSATU (Congress of South Africa Trade Union), was “Struggle-Internationalism-Unity” and, based on WFTU’s published data, 1500 delegates from 111 countries participated in the Congress, while the speakers amounting to 112.

UITBB participated in the Congress with a delegation headed by its General Secretary, Comrade Michalis Papanikolaou. The members of the Secretariat which participated in the delegation were Comrades Giannis Tasioulas, Pedro Milheiro and Claude Bernard Ntoughe. UITBB’s General Secretary, Comrade Michalis Papanikolaou, addressed the Congress on its second day.

On Friday, 7 October, elections were held for President, Presidential Council and Financial Committee. The Congress re-elected Comrade George Mavrikos as its General Secretary and Comrade Michael Mzwandile from South Africa as its new President.

The number of the members of the Presidential Council increased from 40 to 48, The Vice President positions are held, per region, by Cyprus, France and Greece from Europe, Cuba, Panama and Peru from Latin America, Palestine, Syria, Sudan from the Arab world and the Middle East and Vietnam and Korea from Asia.

WFTU’s Secretariat consists of 8 people: the General Secretary, a representative from Portugal (as an observer), 2 people from Indian trade unions and one person each from the trade unions of Sudan, Panama, Syria and Brazil.

On the same day and before the elections, a symbolic event was organized with the hoisting of WFTU’s flag outside of the building where the Congress was taking place, by Eric Μitsali, a historical member of WFTU and COSATU.

The Congress was completed with the unanimous approval of the Report and the Action Plan of WFTU, which defines the goals of the organisation for the period 2016-2020, aiming at further strengthening the class-based trade unionism and defending the workers’ rights for a world without exploitation and social injustice.

On Saturday, 8 October, following the completion of the Congress, a march was organised with the participation of the delegates as well as thousands of workers towards the stadium where, 30 years ago, the host organisation, COSATU, was founded. During the event, WFTU’s General Secretary revealed a monument dedicated to the founding of the organisation.

The Congress was a success as delegates, amidst a spirit of enthusiasm, militancy and unity, discussed the international situation and the problems workers are facing all over the world, while they also assessed WFTU’s actions during the last 5 years and defined the goals for 2016-2020.

It is especially important to note that the Congress was hosted by COSATU in South Africa, as it is the first time a WFTU Congress has been held in the African Continent.

Since almost all of the UITBB Secretariat members were present at the Congress, there was an opportunity to exchange views on the situation of UITBB today and to discuss certain practical issues regarding the upcoming Executive Committee and regional Asia-Pacific meetings in India, in December 2017.

At the same time, UITBB’s General Secretary, during his presence at the Congress, had the opportunity to carry out many useful meetings with several organizations, aiming to develop relations with our trade union.