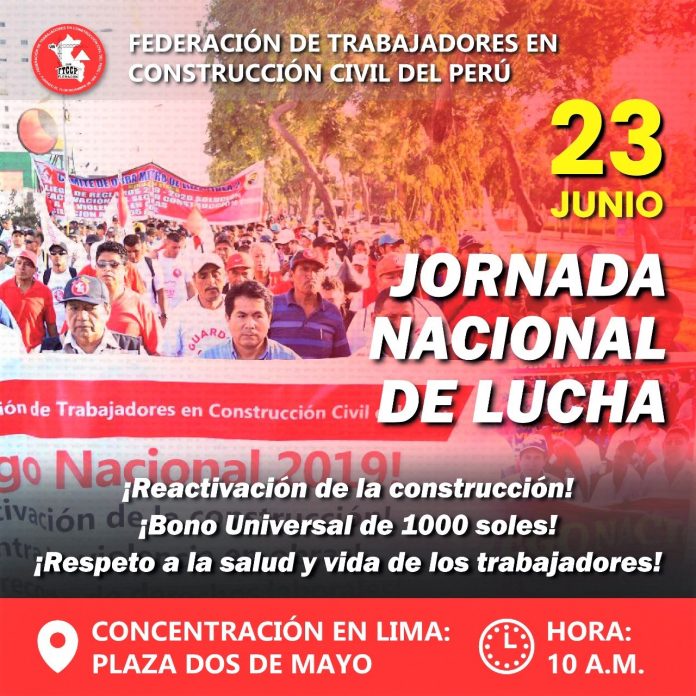 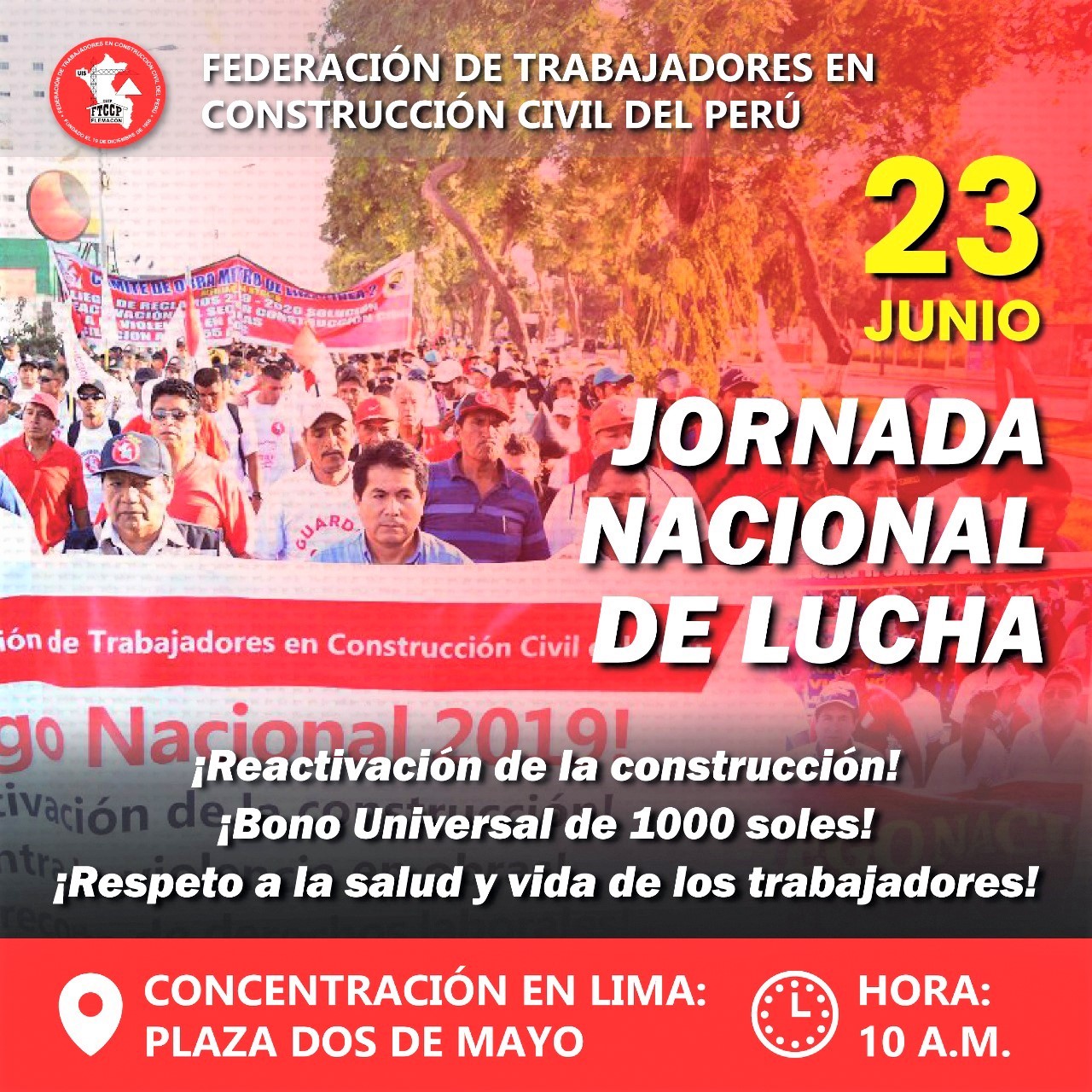 With serious difficulties generated by the COVID-19 pandemic, which has led to the paralysis of all work activities and social distancing, the Federation of Civil Construction Workers of Peru held the II National Assembly of Delegates (Online) on May 30, with the participation of 140 delegates, leaders of the National Directive Council and the general secretaries of the Civil Construction Trade Unions affiliated with the FTCCP.

The II NAD of the FTCCP was successful due to its forceful affirmation of the trade union unity in a unanimous way, who supported the management of the National Executive Secretariat, and approved the report presented by the General Secretary Luis Villanueva Carbajal in representation of the National Directive Council of the FTCCP , and the approval of the 15 points of the ACTION PLAN for the actual situation.

THE FIGHT IS NOT IN QUARANTINE

It seemed that the NEW CORONAVIRUS crisis had silenced social unrest, but inequality is widening, and poverty is deepening: and the people are the main victim of the pandemic.

2019 was an intense year of social struggle in Latin America, as illustrated by the massive protests that occurred in several countries in the region. The fighting movements that were to have continuity in 2020, were suspended by the coronavirus pandemic. However, the structural social and economic crisis that neoliberal policies have not resolved, and aggravated by the COVIT-19 pandemic, once again the peoples of Our America are protesting, some of which are already being felt, at despite the isolation and limitations to the right of assembly. The risks increase, but the needs of the people, in a continent punished by poverty and inequality, cannot wait. The people would be condemning themselves to die from COVID-19 or starvation, waiting for the “Bono”, which the bureaucrats delay to distribute.

Our II National Assembly of Delegates, after carrying out a political-trade union balance, in the context of the COVID-19 pandemic, approved an Action Plan to demand from the Central Government that the measures to confront CORONAVIRUS, focused on the majority sector of the people, who structurally live marginalized from basic services: without water, toilets, education, employment, etc. On the other hand, formal workers (25% of the PEA), who have lost their jobs since March, their meager savings have been wiped out during the more than 80 days of quarantine.

Economic relief from the economic crisis has fallen on the backs of employees with the money from their CTS, and their pension funds in the APF. While the economic bailout, with the first 30 billion soles, delivered to large banks, with zero interest, to reactivate small and medium-sized enterprises (MYPES), due to excessive requirements and great informality, they have not been able to access the credit, being favored by large companies that have enough money; In addition, another disbursement of 30 billion soles is enlisted. In other words, the richest business sectors will be the main beneficiaries.

The convoluted distribution system of “Los Bonos” is not fulfilling the objective; We therefore propose the UNIVERSAL BONUS of 1000 soles for all Peruvians, who do not have resources.

The conquests are achieved if our proposals are accompanied by the organized mobilization of workers and other sectors that want real structural changes such as the reform of the pension system; the fight against monopolies in the field of communications, in the pharmaceutical chemical industry and the chains of pharmacies and apothecaries in the hands of the manufacturers of medicines; and substantively, the change in the neoliberal Constitution imposed by the Fujimori dictatorship and that after 30 years the result is extensive poverty, the strengthening of oligarchic groups, complicit in the corruption instituted in the State branches.

The state of emergency and the total “quarantine” is lasting more than 80 days, and the plan to reactivate productive activities has not yet begun. The Coronavirus pandemic has increased in Peru, ranking behind Brazil among the most affected countries on the continent, with more than 6,000 deaths and 120,000 infected.

The measures that the Martín Vizcarra government applied to contain the coronavirus: such as isolation, social distancing and the closing of borders, have meant a severe blow to the country’s productive sectors. Nearly one million 216 thousand 600 Peruvians have lost their job in Metropolitan Lima area in February, March and April, due to the Covid-19 pandemic. According to the Ipsos survey, 41% of Peruvians have lost their jobs.

Regarding the four phases of reactivation of the economy planned by the Central Government, only big companies can comply with biosafety protocols due to the high costs; as in the case of the chicken shops, where the big chains can sell by delivery.

The Construction sector is the most affected by the paralysis of economic activities, a reduction of 30% is calculated during the current year, which will represent the loss of 40% of direct jobs, the bankruptcy of a similar proportion of construction companies and the impossibility of fulfilling with the investment objectives, both public and private, in the upcoming years.

It is important to point out that these initiatives had a good result, because construction was included as one of the activities to be implemented from Stage I of the reactivation of economic activities, and the relations of the infrastructure, sanitation and road works have been published and restarted.

THE PUBLIC HEALTH SYSTEM HAS COLLAPSED

The mismanagement of the COVID-19 pandemic, which continues to claim the lives of security workers, doctors, technical nurses, in ESSALUD, due to lack of personal protective equipment (PPE), lack of ICU beds, ventilators and oxygen.

On the other hand, needless to say, the hospitals of the National Police of Peru, the Navy and the Army, where those infected are rising at the national level. In the Police polyclinics, there is a concern for all police officers to pass the rapid test, the idea is that 100% of the police officers who have operational tasks in the streets, respecting the health emergency, maintaining order and isolation, pass these quick tests, and go to work, exposing your lives.

Therefore, it is necessary to control the health policies of the national government within the framework of quarantine, since we know that, due to its class orientation, it would take advantage of the pandemic to implement anti-labor policies, as is already happening; It is our duty to guide the political and protest struggle of the workers and organized the people to prevent the poor from bearing the cost of this crisis.

It is vital that the progressive, anti-imperialist and socialist forces of Latin America unite in action, to promote a new international social order, opposed to the “new normal” that centralized the power of the neoliberal oligarchy and imperialism that intends to continue exploiting workers with labor flexibility, unfair pension systems, which deepen the impoverishment of peoples.

For all these reasons, the FTCCP has called all its trade union bases to participate actively and forcefully in the NATIONAL DAY OF STRUGGLE ON JUNE 23, whose demands are in our PLAN OF ACTION.