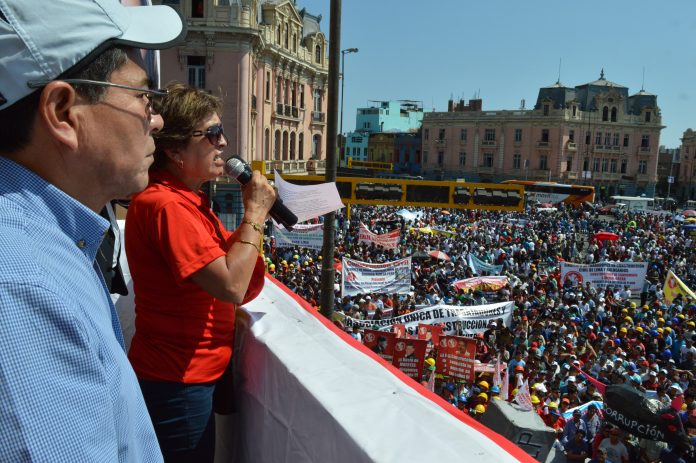 From the mobilisation in Peru – 6 April – CGTP – THE FORCE THAT UNITES US!

On Wednesday April 6 this year, the Federation of Construction Workers of Peru – FTCCP, affiliated to the CGTP presented its national list of claims to the Ministry of Labour and Employment, in the city of Lima. For this reason, a national mobilization took place, which brought together more than 350 000 workers across the country. In the capital city, more than 10,000 workers took to the streets peacefully, to accompany the delegation that delivered the list of clams. The delegation was composed of workers of the Lima branch of Federation of construction workers, as well as of workers of from the South of the country and from Callao. In addition attended delegations workers from the southern and northern suburbs of Lima. The mobilization started at the Plaza Dos de Mayo, where the headquarter of CGTP is located, with the presence of the national leadership of the FTCCP headed by its general secretary Mario Huaman and other leaders of the Executive Secretariat. In the rest of the country, demonstrations took place in all the regional capitals, in particular in the cities of Arequipa, Chiclayo, Piura, Cusco, Puno, Ayacucho, Cajamarca, Huancayo, among others.

FTCCP is the only trade union organization in the country that has managed to defend and maintain collective bargaining by industrial branch. Thus, each year it presents its claims before the ministerial authority demanding the convening of the Peruvian Chamber of Construction, which is the body of entrepreneurs.
The Construction sector collective agreement provides coverage to more than 350 thousand workers in the sector throughout the country. Through this mechanism, it has been possible to increase the purchasing power of workers and to improve working conditions substantially in recent years. The present round of negotiation takes place in a special economic and political climate. On the one hand, the country is in a situation of economic cooling down, with the private sector and the state having reduced investments in infrastructure, thus reducing jobs in the sector; while politically we are in an election period with the daughter of former dictator Fujimori leading a rightwing proposal and at the other end Veronika Mendoza, leftwing candidate of the  Frente Amplio. The election outcome will have a major impact on organized labor and collective bargaining processes.