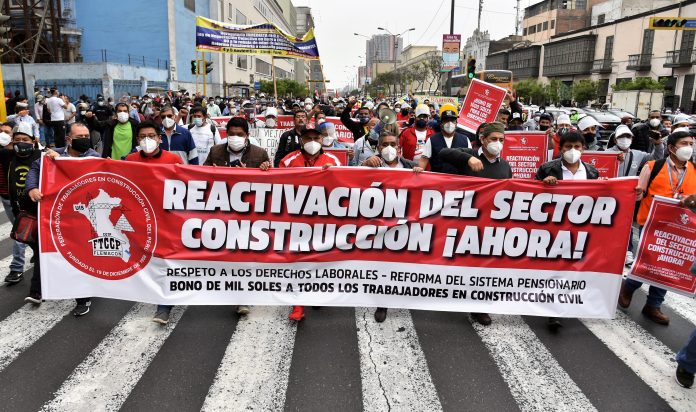 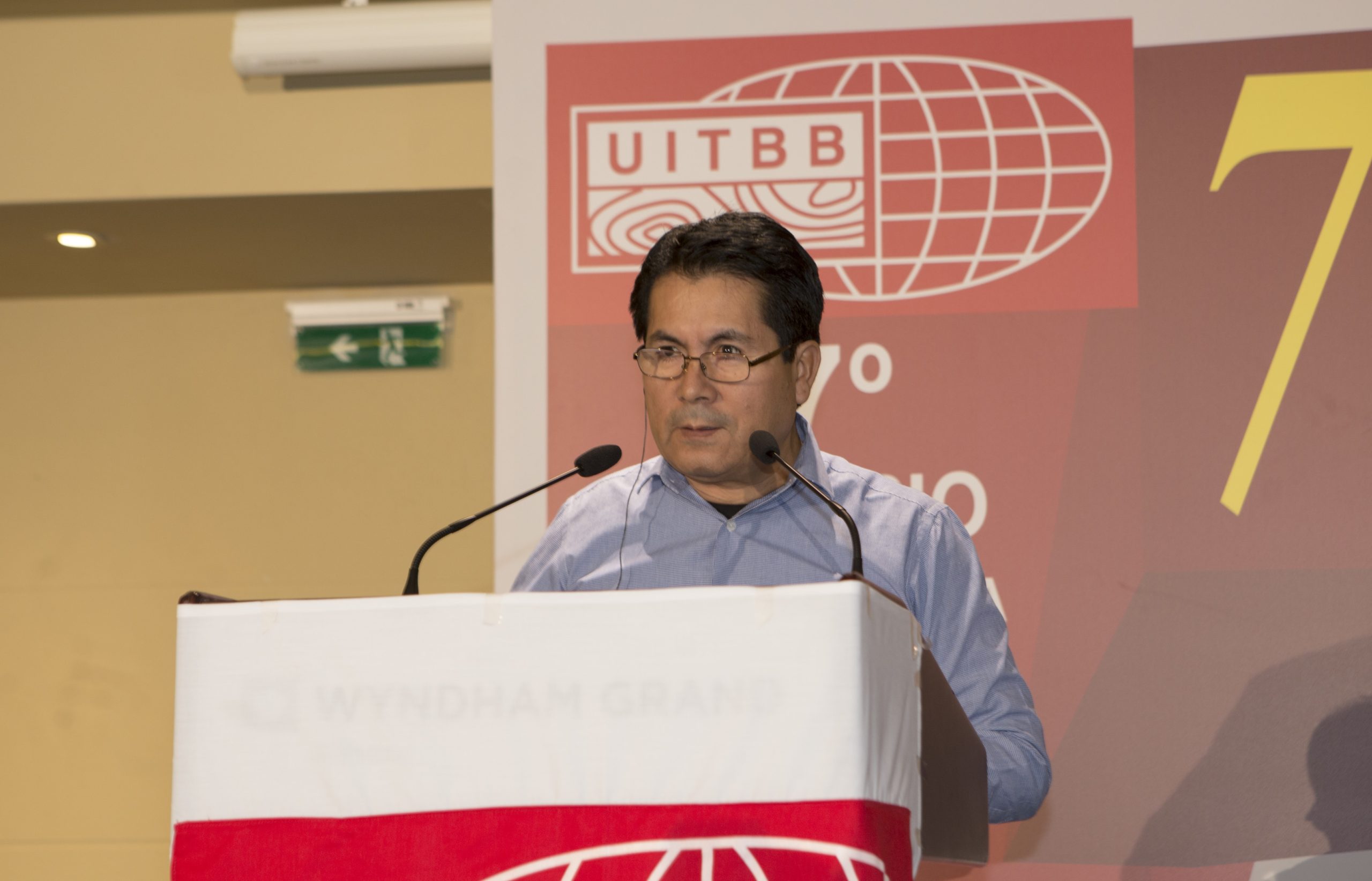 The year 2020 marks the 50th anniversary of the Congress which created FLEMACON (Latin American Federation of Workers in Building, Wood and Building Material Trades). That Congress was attended by representatives of construction workers’ trade unions and federations from Uruguay, Panamá, Costa-Rica, Chile, Brazil, Bolivia, Peru, among others, who met with that purpose at the headquarters of the Federation of Workers in Civil Construction of Peru  (FTCCP) in Lima.

The importance of this Congress, held in 1970, lies in the decision to adopt accords to be implemented by workers in their respective countries in Latin America and the Caribbean, as a first step to achieve worldwide consensus.

One of these significant agreements, and perhaps the most relevant one, was to fight for the establishment of Civil Construction Workers’ Day on October 25, each year. In Peru, this goal was achieved in the year 1985, and became enshrined in Law 24324.

Because October 25 fell on a Sunday this year, the holiday has been moved to the following day, Monday, October 26, as provided by Legislative Decree No. 713 and Law No. 26331.

25 October was not a random date. It was chosen to commemorate a historical event. It was Saul Mendez, Secretary General of the Panamanian union SUNTRACS, who recalled at a conference organized by the FTCCP, on October 15 this year, that this date has class significance. He noted that October 25, in the old Russian calendar, was the date of the 1917 revolution, the unforgettable October Revolution, a date that the Latin American and Caribbean construction workers wanted to underline at their founding congress of FLEMACON. Panama has also succeeded in establishing the 25 October commemoration; so has Uruguay.

The intervention pronounced by Saul Mendez, “New technologies and the mobility of labour in the construction sector”, is part and parcel of the commemorations relating to this occasion. That event was followed on 22 October by a presentation on “The workers’ leap from industrial struggles to political struggles”, made by Daniel Diverio, General Secretary of SUNCA (Single National Union of Construction and Allied Workers) of Uruguay; and President of UITBB (International Union of Building, Wood and Building Materials Workers’ Unions).

The cycle of activities culminated with a trades union forum entitled “FLEMACON at the vanguard of the construction branch in Latin America”. The participants in this forum included Lucía Maia, FLEMACON’s President; Daniel Diverio and Saúl Méndez.

This important trades union forum, which echoes that earlier congress which founded FLEMACON in 1970, has taken place amidst a context of global crisis dominated by the Covid-19 pandemic. The weight of this crisis has been placed on the shoulders of the world peoples and workers in general. This is a crisis during which labour rights have been violated and the poorest sections of society are paying the price with their lives.

On average, Peruvian workers in the building sector toil only during 4 months per year enlisted on a payroll and enjoying all labour rights. This is due to two key factors: construction work is casual; it lasts for as long as the duration of the construction job for which the worker has been hired. There is also a labour market composed of nearly 75% informal jobs. Most of the year, a worker will work in the informal sector or will remain unemployed; it is then that he or she must resort to his or her meagre savings. That is why, since the start of the quarantine, with the parallel halting of the civil construction activities, more than 450,000 construction workers have lost their salaries and then their savings.

Peru has endured the worst Covid-19 management strategy in the world. It became the country with the highest number of deaths and infections in proportion to the number of inhabitants. It was at the top of international news. The amount of State aid, which reached too few and arrived too late to Peruvian families, represents barely a fifth (1/5) of the money lent to private companies through a single programme, named Reactivate Peru. This programme, as its title seems to suggest, was meant to reactivate the economy. However, this loan constitutes a sum of money over which there is neither control nor proper monitoring. So far it has led to a situation in which around 7 million people have lost their jobs in the formal and informal sectors in mid-2020. We have witnessed a capital input of millions from the state funds, but there has been no proper economic reactivation.

Faced with high unemployment, and the lobbies of the business community, which are eager to implement a war-time labour regime and to misuse the national treasury resources in a move that smells of corruption, the workers in the construction and other economic branches took to the streets to protest during the state of emergency and under the compulsory quarantine, while circumventing state controls, to demand effective actions against hunger, misery, unemployment and the misuse of tax money.

In addition to implementing our branch actions, we have also supported the combative actions deployed by the General Confederation of Workers of Peru (CGTP) in defence of the working class interests. And so, we are actively participating in calls for every National Day of Struggle of the CGTP, including the most recent one, on November 5, against the suspension of labour activities and against collective dismissals, in defence of collective bargaining and in favour of the 1000 Sol (*) bonus for all elderly Peruvians to help them face this crisis.

Peruvians receive bonuses amounting 760 Sol (about US$211). These are not assigned to individuals, but to families. The manner in which the family member who receives the bonus is chosen, constitutes a sort of death raffle that we, the workers, refer to as the new hunger games, thus recalling the novel series by American writer Suzanne Collins, which served as inspiration to the film serials bearing the same name. No one knows for sure who will survive or vanish in this pandemic.

Instead of this raffle lacking clear rules, and which keeps the population in a state of anxiety, we, the workers, have demanded the allocation of a 1000 Sol bonus to all grown up persons during the pandemic. This would allow us to protect the population from hunger, misery, malnutrition, death out of disease caused by low immunity, to prevent dropping out of school in general, among other evils whose real effects we shall be able to measure only when the pandemic is over.

This is not an out-of-context demand, but one that fits with global demands for a universal basic income and a tax on wealth that would become excellent measures to safeguard life.

Though several months have passed since the start of the economic recovery, only a low number of workers (86.000) are now working in civil construction activities out of a total 450.000 who were active before the pandemic. Furthermore, during the first days of construction sites reactivation, about 30% of the labour force caught the covid-19 infection in public transport. Peru has one of the most informal and overcrowded transport systems in the world. Infections were also rampant in the workplace, due to the lack of Covid-19 molecular tests that would have allowed to efficiently singling out contaminated cases.

That is the Peruvian reality today, when we are commemorating the 50 years elapsed since the foundation of FLEMACON. Different is the context, but similar are the difficulties for the workers, in particular, and for the peoples, in general. Fifty years after that first meeting, we, the protagonist, are not the same; but we keep alive the same spirit for change and social justice that run in the blood of our predecessors in their struggles. Those struggles of theirs have become our struggles today.