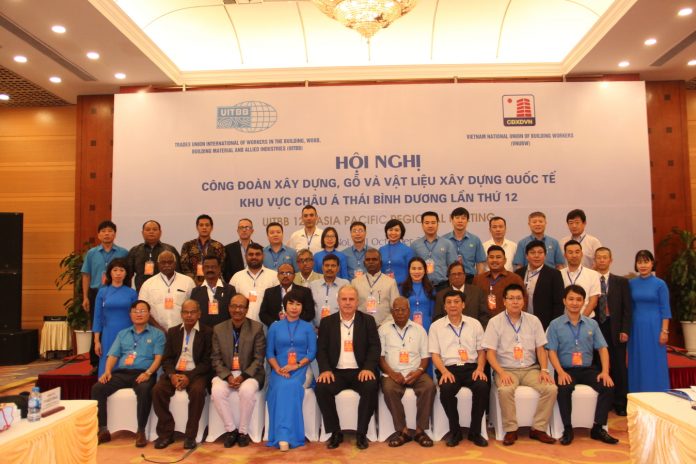 In the spirit of strengthening relationships, exchanging experiences and good practices for the benefit of the workers and showcasing international solidarity, and in implementing the Action Plan of UITBB, the participants in the 12th Asia-Pacific Regional Meeting who met in Hanoi on 9-11 October 2019, would like to stress the following:

5.The participants express their solidarity to the working women in the construction industries and express their         opposition to any form of gender discrimination at the expense of women. They repeat the long-standing             position of UITBB for taking steps to protect women, to get equal pay as the men, to actively pursue the possibilities of having more women in our sector, to get more support in the workplaces, and to showcase the advantages of increasing the women in the construction sector.

6.UITBB repeats its position on migrant workers that the working class is one, undivided, regardless of colour, religion, language and place of origin, expressing at the same time its solidarity to the migrant workers. Its members should inform the workers of their rights, so that they can be protected.

8.UITBB demands that all workers enjoy all political and trade union rights.  The participants reaffirm their resolve to organise and strengthen their class-based struggles against the barbaric attack by the capital, through anti-labour legislation, reduction of wages and social security’s, the prohibition of the right to strike and unionise, privatisations of public services etc.