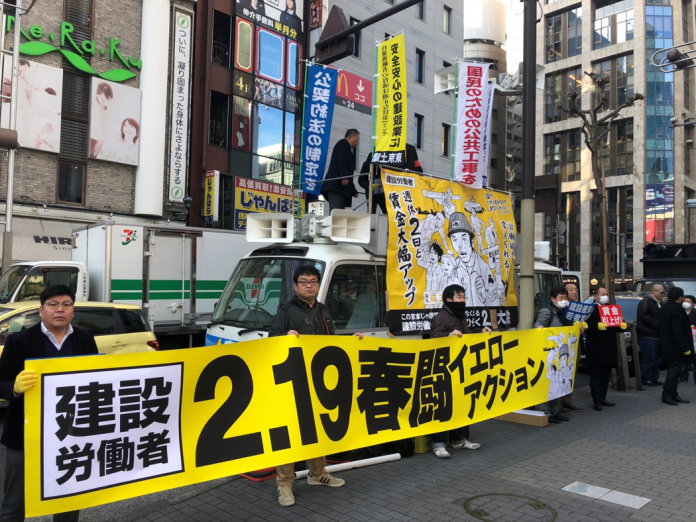 Comrades, one of Japan’s unique labor movements is the so-called “spring struggle”, in which workers in all industries organise demonstrations and actions at the beginning of spring.

In Tokyo on February 19, the Japanese organization affiliated with UITBB organized actions to strengthen solidarity with other Japanese construction unions, and ask for a significant increase in the wages of construction workers and for two days off per week. This action was called «2020 Yellow Action», as the first protesters for improvement of working conditions in sites in the Marunouchi area of Tokyo, where the headquarters of large global companies are concentrated, wore yellow clothes.

500 people gathered in our action from all over Japan, asking apart from the above, an appropriate assessment of the role of construction companies in disaster recovery and treatment. What is more, a rally was organised to unify the will to realize a construction industry that encourages young people to join the company, while publicity campaigns at major stations were also organised. From the publicity campaigns in the streets

At the rally, members of the parliament, including the Japanese Communist Party, criticised the Abe administration’s corrupted politics, which has become a serious problem in Japan, and asked for an improvement of the construction workers’ treatment. With the determination to struggle in the Japanese Parliament, greetings of solidarity and encouragement came in succession.

Mr. Matsumoto, Chairman of the Construction Metropolitan Area Joint Fighting Conference, one of the organizers, said: «I understand that construction workers play an important role in supporting disaster recovery and the foundation of civil life. However, the recruitment of young people is not progressing because of low wages and poor working conditions. The construction industry has no future without resolving this contradiction. It is indispensable for industrial development to give back to the contractor and pay the proper unit price and wages to the prime contractor. We will work together to fight the battle this spring. « After the unification rally, publicity activities were held in front of major stations. All participants in the campaign put on yellow gloves and raised awareness with the people on the street using advertising materials and placards.

Let’s do our best together!