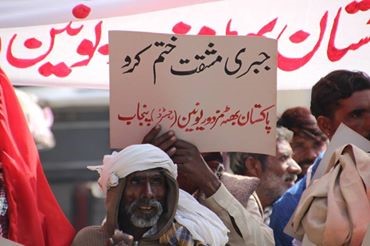 On 16th February, brick kiln workers from Punjab province in Pakistan organised a rally and a sit-in front of Lahore Press Club. Their demands were the implementation of a minimum wage rate, the elimination of bonded labour, social security registration, Employees Old Age Benefits (EOBI) and the elimination of child labour. The sit-in continued for 8 hours until successful negotiations were held with Punjab Labour Secretary Mr. Ali Sarfaraz and Labour Director Syed Hassnaaved who assured the workers that the government would start a campaign on implementation of wage rates and fulfillment of all the other demands by Brick KIln workers. Workers from different districts from Punjab province joined the rally despite harassment and arrests by the police the previous night.