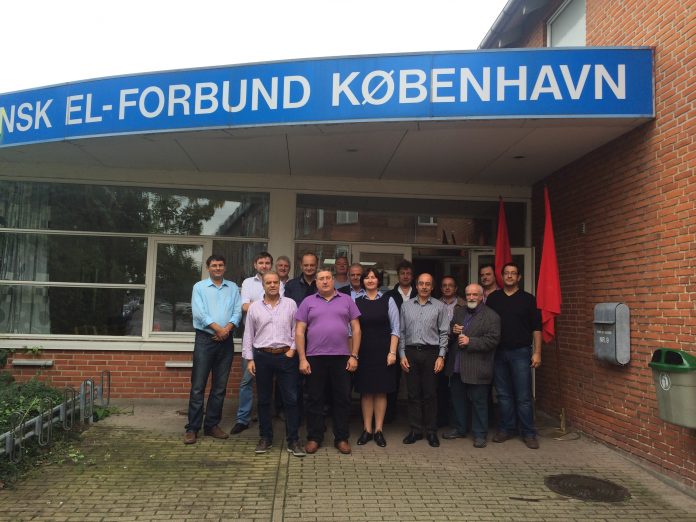 DECISIONS OF THE IV UITBB EUROPEAN MEETING IN COPENHAGEN 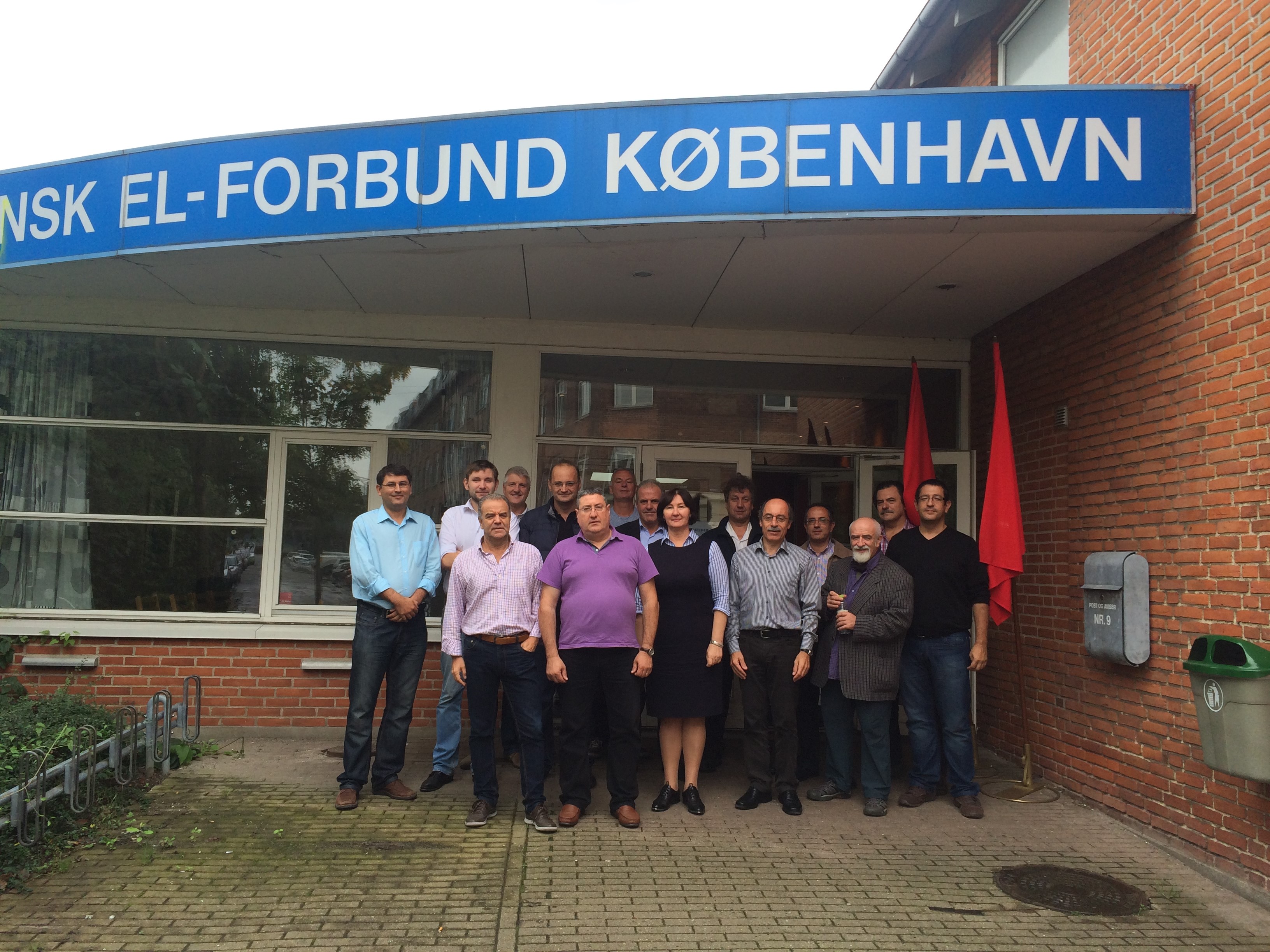 The UITBB meeting held in Copenhagen, in cooperation with the Construction Workers Association of Denmark, having analysed in depth the situation that has been created for construction workers in Europe, arrived at the following common positions:

– Working people’s problems are common and stem from the crisis created by capitalism itself, as a result of the contradictions that characterize it and for millions of workers in Europe and throughout the world has resulted in the sudden loss of their job, savage reductions in their incomes and social marginalisation, mass destruction livelihood and poverty.

– The only way to combat this enormous attack which working people are facing is through organized struggle, resistance and assertion.

– Through our daily struggles we must wage to deal with the new situation, we must also set new goals which if achieved will strengthen the position of workers in the construction sector, both domestic and immigrants, in view of this all-out attack.

In addition, the European meeting of UITBB notes that the major issues of concern to workers, such as unemployment, undeclared work, subcontracting and the use of immigrants and a section of the domestic labor force as a cheap labor force against organized workers must continue to be at the center of our attention. The concrete forms of action that we will propose will aim at improving working conditions for workers in the construction industry and on the other hand will seek to limit the scope for the reactionary forces’ activity, who find the opportunity because of working peoples despair and negative emotions in each country to drive them towards dangerous ideologies such as xenophobia, racism and fascism.

More specifically, to address the above problems and phenomena, the European meeting of UITBB, proposes among others to integrate the following goals in our daily activities:

To tackle undeclared uninsured work, we should demand that every employer, prior to the commencement of employment of any worker in the Industry, is obliged to obtain and hand to the worker the “Commencement of Employment Confirmation” form. A copy of the confirmation of employment for each worker should be kept by each employer and be available for inspection and another copy should be sent to the Department of Social Insurance of the Country. The refusal of the Employer to comply with this procedure should be considered as constituting a violation of the country’s relevant labour legislation.

All Organizations should demand in an organized way provisions on labor issues to be included in all contracts that are signed for Public Utility organization projects, in order to establish a web of protection for working people, both for the main contractor and the workers on subcontracts and that will also aim to combat unemployment. Some issues, among other things, that could be set as demands include the following:

– The main Contractor should have the obligation and the primary responsibility for the implementation of the working conditions of Sectoral Collective Agreements, both for workers which he/she employs and for the workers employed by subcontractors in the project.

– The main Contractor and subcontractors on each project of the public sector should be obliged to hire workers from the lists of the registered unemployed, in the cases where there will be a need to employ additional workforce to carry out the project.

All working people who work, or will work in the industry, must hold the relevant professional certificate to be eligible to work in the construction industry.

A basic prerequisite for an employee to be able to hold the Professional Qualification Standard in the country of destination should be a basic knowledge of the language of the country.

All sectoral trade union organizations active in the industry should put the above question among their immediate priorities, because in this way the uncontrolled entry of workers in the construction industry will be reduced.

As the most accidents at work occur in the construction industry, we should demand that both in our collective agreements and labor legislation in each country, there should be a precondition that for anyone to be able to work in the industry, he/she through training should acquire basic knowledge on matters related to Health and Safety on construction sites and hold a relevant certificate that testifies the completion of the training..

All construction workers organizations should place great emphasis on the issue of the main contractor’s responsibility on the issues concerning the implementation of collective agreements and Health and Safety, both for the workers he/she is employing, as well as for the workers on subcontracts.

The immediate goal is the inclusion of the above term in all Collective Agreements applied in the Construction Industry in various European countries and in their corresponding labor legislation.

We should establish on a permanent basis the exchange of legal documents and practices implemented by each organization in the cases where strikers are prosecuted individually, or the organizations themselves when holding strikes and demand that the same terms of employment in the Collective Agreements apply for immigrant workers as well.

We should prepare a draft model of collective agreement that will include basic terms of employment for workers in the construction industry in European countries and demand their implementation in all countries.

We should highlight to the greatest extent possible the problem of unemployment, express on a daily basis our practical solidarity with the unemployed and not let this big section of fellow workers distance themselves from our organizations and through concrete organizational work we should involve them in the daily struggles to combat the attacks waged by various governments and employers.

Particular attention should be paid to the safety and health of construction workers and the ideological basis of the whole issue should be projected by stressing that health and safety issues must stop being connected to the cost of production and the level of spending and that their application is determined by competitiveness. We must insist that people in the end should be put before profits.

We should take concrete action against racism, xenophobia and fascism. Many migrant workers are entering in mass numbers the construction sector. Because of the acute exploitation migrant workers are facing from their employers and their widespread use as a weapon against workers of various sectors in their countries of destination, we must intensify our efforts to integrate immigrant workers in our Trade Unions for instance through social and cultural initiatives. The translation of the terms of employment in the different languages, the publication of informative material in the languages ​​of immigrant workers and the organization of special fast-track courses to learn the official language of the State of destination will assist the above efforts.

Establish a day of action against the criminalization of strikes.

We should enhance and seek better coordination of the work of the sectoral Construction worker’s Trade Unions in Europe in our actions within and against multinational companies.

A draft model contract on terms concerning labor issues should be prepared immediately that will represent the basis and help Construction workers organizations to promote this issue.

European meetings of construction workers organizations should be held on a permanent basis and the meeting proposes that the next meeting will be held next year in Cyprus.