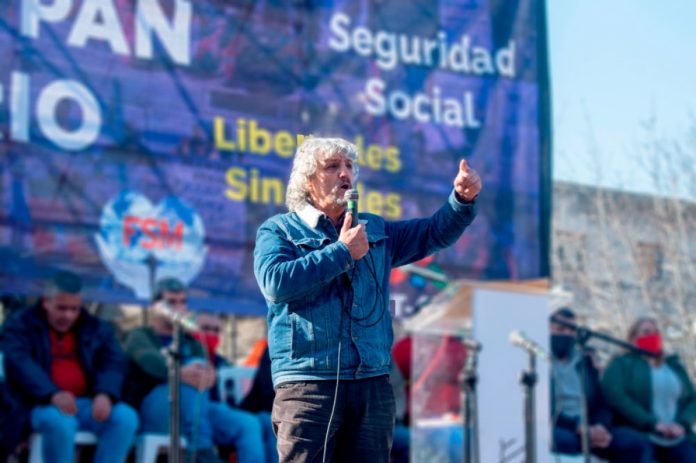 Daniel Diverio (SUNCA General Secretary and UITBB President): “It is the workers’ mobilization and struggles in the streets that get rewarded”

“Tired, but at ease.” This is how Daniel Diverio,  SUNCA’s Secretary General and President of UITBB, described himself towards the end of a long day in which the National Board of Directors (CDN) approved unanimously the pre-Agreement that achieved several objectives set by the workers, which are built upon the fundamental principle of defending the right to collective bargaining. Considering the fact that government did not want to convene the regular meeting of the Wages Councils, the construction trades union deployed an action and mobilization plan with assemblies throughout the country, always respecting the health measures established by the authorities in the current COVID-19 pandemic scenario. Diverio’s view is that this action plan was “key” to obtain the convocation to the negotiation table that culminated with the pre-Agreement reached last Saturday dawn and ratified today by the CDN board. “It is the workers’ mobilization and struggle in the streets that gets rewarded,” said the President of the Building Workers Union.

In the midst of the pandemic and without neglecting health care measures, SUNCA unfolded its entire union potential to enable the conditions aimed at establishing a negotiating scenario with the business chambers.

As stated by SUNCA’s General Secretary to the PIT-CNT union website, the pre-Agreement contains very important elements in terms of wages, working conditions, but also in terms of solidarity with the most needy. “The pre-Agreement, unanimously approved by the CDN, was made possible thanks to the thousands and thousands of militants who went out to mark their point in every workplace, in assemblies, in the streets and squares, in every corner of the country,” he underlined.

In connection with solidarity aspects, Diverio explained the decision to create a Contingency Fund, which will enjoy a 30 million pesos annual contribution “to help our male and female colleagues who are facing a most complex work situation and have no income”. In this sense, he recalled that under the present health, economic and social emergency, SUNCA has delivered 5 thousand aid baskets to our branch workers who are experiencing very vulnerable conditions. “The Contingency Fund is capable of delivering up to 20 thousand food baskets per year,” meaning about 40 kilos of food each. It also provides for the handing out of construction material baskets to families of female and male construction workers whose homes present serious deficiencies. “This fund is most important because it translates into concrete solidarity, and not words “.

The pre-Agreement also contains aspects related to occupational health, particularly linked to the prevention and detection of diseases. An improvement was obtained concerning winter warm clothes equipment, by adding a waterproof long jacket. Also relating to health matters, efforts shall be deployed to develop an observatory charged with monitoring small scale workplaces, which are more difficult to follow. “This mechanism is aimed at ensuring the rapid implementation of the rights of male and female construction workers, specifically in terms of health and safety at work” he added. Likewise, a protocol shall be developed to respond to climate risk situations, focusing on prevention, dealing with the inland regions of the country, where many times the weather alerts catch the workers performing outdoor tasks in the construction sites. On the other hand, and related to safety and hygiene, one paid hour per month was also achieved.

SUNCA was able to extend some already existing benefits, such as the special item for tools’ wear and tear, and also various aspects related to disability and gender clauses which will also be expanded. In this regard, emphasis was placed on the insertion of women in the industry.

One of SUNCA’s Congress resolutions stated that the union would not accept any salary reduction. This was not a minor issue, considering the particular situation in which the country finds itself. Notwithstanding, the Union’s President had already pointed out in a note to the PIT-CNT web Portal that this industry had been sustained even during the pandemic and that it has real growth prospects.

“The first thing we did was to reject the government’s formula that proposed a pure and simple salary reduction. And then we sat down to discuss, and we achieved, a formula that generated the conditions for maintaining salaries, because the adjustment is over 100% of the average of the projected inflation “. The formula also includes two clauses (one as a trigger, and the other one about the projected inflation) that the union considers key as a “guarantee” for the maintenance of the present purchasing power of the salaries.

During  2019, the number of construction workers contributing to the Social Insurance Bank (BPS in Spanish) was about 44,600. If the average number of workers contributing to the BPS would fall below 40,000, a minor correction would be applied. But according to Diverio, for that to happen “a catastrophe” should take place in the construction industry, something he considers quite unlikely. On the other hand, if there is an increase in the number of contributors that exceeds 51,000 people, the pre-Agreement establishes that in addition to preserving wages, there shall be a wage increment.

“It is a pre-Agreement that contains this very important wage component; and, of course, all other elements are also very valuable, in terms of occupational health, gender, disability and solidarity with the most vulnerable sectors,” he stressed.

For SUNCA’s General Secretary, the negotiation outcomes are the end result of trade union mobilizations that managed to “set the stage”, upon which male and female workers stood up firm, “with eagerness to enter into dialogue”, convinced that the struggle is the way to confront the attacks of an excluding economic model.

“We always knew that a right-wing government was coming with its proposals for labour flexibility and attempting to eliminate fundamental workers instruments such as collective bargaining and Wage Councils. That is why, at this complex turning point affecting our country, our first battle was aimed at being convened to collective bargaining discussions. The fact of having arrived at the dialogue table in order to talk about wage conditions, was made possible by the impressive mobilizations staged throughout the country, in the form of assemblies, strikes, plenary gatherings, which led to a large general assembly convened in front of Palacio Legislativo (Parliament), with participants who travelled in more than 200 buses from all over the country. That remarkable attitude towards mobilization and the commitment to struggle were decisive to build up the scenario, to mark the field and, all in all, we may say there was a before and an after that was crowned by this pre-Agreement. Therefore, what remains ratified is that “it is the workers’ struggles in the streets that get rewarded “, he added.

Points of the Collective Agreement 2020

Wage increases – Between May 1, 2020 and May 31, 2020, the industry wages will be increased by 3.71% as a consequence of the application of the correction which results from the inflation difference that has occurred and the wage component granted for the period of July 1, 2019 to April 30, 2020 (5.80%) according to the provisions of Article 8 of the seventh round.

Special Item – An extraordinary item will be granted (for one time only) in the form of 12 food coupons to every worker who was listed on the payroll in May. This will be paid together with the salary of July.