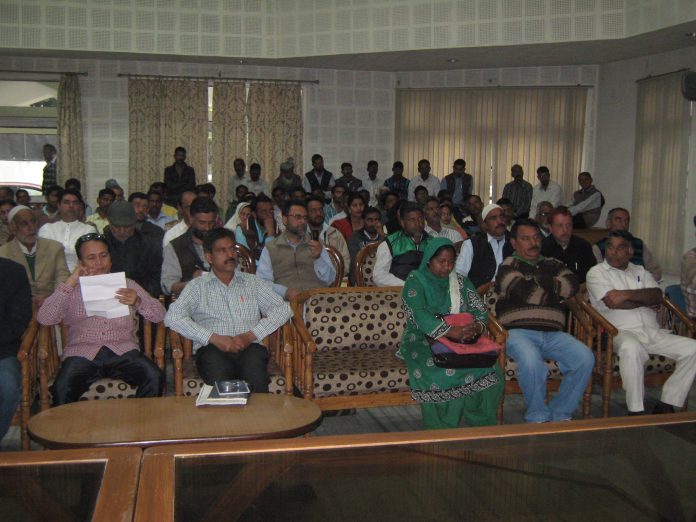 It is good that within a short period of time, the BJP Govt. exposed themselves as being at the service of national &
international monopoly houses. He said that BJP backed by RSS wants to divide Indian people, demolishing the secular fabric our constitution. We can not be silent spectator. We have resisted this serious conspiracy of RSS-led BJP Govt.Finally, he talked about the CITU support to the struggle led by CWFI in J & K.

Comrade Ramesh presented the activities and struggles led by different Unions in different districts and projects, as well as the Union’s wins for the workers. Md. Afzal, Gulam Nabi Khan, Ram Bachan Ram, Abdul Rasid, Chalhotra and others narrated their experience of struggle in the past years. They mentioned how organisations such as CITU awakened worker to stand up– and then induced them to move, run for the struggles.

Com. Prem Gautam, convener, Northern Regional Committee of CWFI shared his experience of struggles in H.P. and requested to organize a project for construction workers under the banner of CITU & CWIF.

This Preparatory Committee will function till the state conference of construction workers takes place within 6 months time.

Comrade Debanjan Chakrabarti, General Secretary, CWFI in the end told about the benefits of the Constitution Workers Welfare Fund which are being extended to the workers in different states in the past years. He told how in other states workers are struggling and how, through mobilisation, they realised many demands.

Com. Chakrabarti also talked about the demand of construction of Labour Colony (one room flat to each beneficiary). There is provision of getting financial assistance for building houses by construction workers in the Act and it should be demanded immediately. He also spoke about setting up a skill development institute at Jammu and other at Kashmir and if possible one unit in each district for upgrading the skills of the workers in order for them to earn money for their family.