CALL TO ACTION AGAINST THE AMERICAN BLOCKADE OF CUBA

On Wednesday, 19 October, the Cypriot-Cuban Friendship Association organized an event at José Martí Memorial in Nicosia, Cyprus, calling for action against the American Blockade of Cuba. 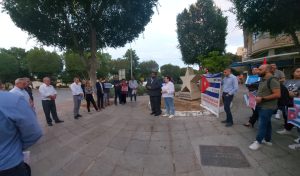 The action was organized ahead of the discussion, on November 2 and 3, at the UN General Assembly, of the Cuban resolution condemning the criminal US blockade against Cuba and the Cuban people.

The Cypriot-Cuban Friendship Association calls for support and solidarity for Cuba and the Cuban people, who are fighting for dignity and national sovereignty, against the criminal American economic, commercial and financial blockade, which has been in place for 62 years.