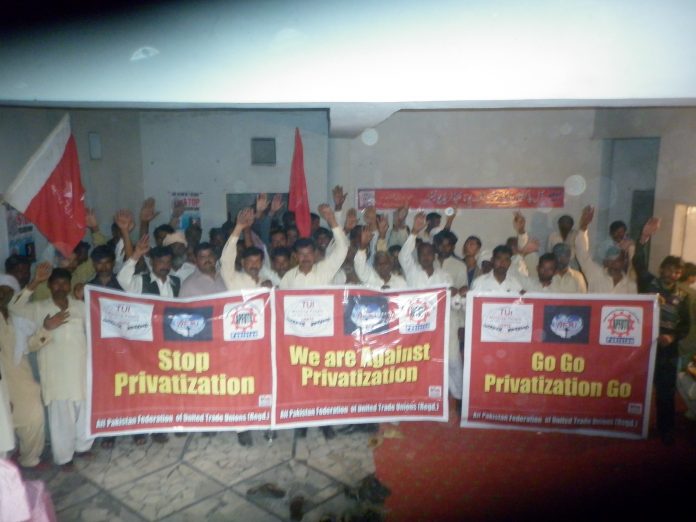 Addressing an Anti-Privatization Labour Conference held at Mandi Bahauddin arranged by the All Pakistan Federation of United Trade Unions (APFUTU), various workers’ leaders slammed the idea of privatization of the PSEs. Addressing the participants, Pirzada Imtiaz Syed, Muhammad Naveed, Imtiaz Shaheen among others, said: “We are gathered here to protest against the privatization project, which the government is bent on going ahead with? Over a decade ago, APFUTU denounced the government’s practice of taking loans from the IMF and other international organizations. It has been predicted back then that the government would sell off state-owned firms to pay off the debts. Even parties that promised to give the people “Roti Kapra makaan” (the bare necessities of life) kept on taking loans. Then came the right-wing parties, which sought to divide the country along sectarian lines. They created social fissures and deepened the class divide. Participants in the Event

APFUTU will support public sector workers in their struggle against privatization. The media tends to cover only political parties led by capitalists or Islamists. They have turned a blind eye towards the problems of the workers. APFUTU organized these seminars in 8 cities including Gujrat, Sialkot, Gujranwala, Multan, Fasilabad and others around the country following the call of TUI-PS and WFTU, on international action day against privatizations.