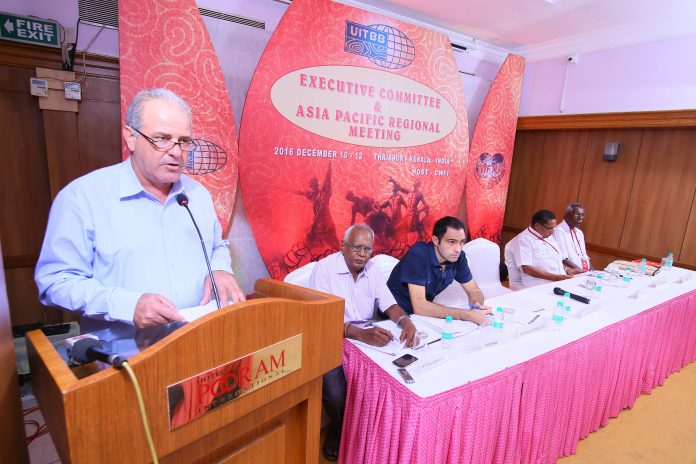 I would like to salute all of you and allow me to express my sincere thanks to our Indian comrades for their warm reception to their country and their hospitality.

This proves the very strong relationship that exists between the Indian comrades and UITBB while, at the same time, underlining that the international solidarity is high in the priorities of all the organisations that are affiliated with UITBB.

Comrades, inequalities around the world continue to exist and, unfortunately, on a daily basis, deepen the chasm between the few that represent the capital and the many who are the workers.

This will continue to exist in the world, so long as capitalism continues to be the dominant economical system in the world, because it is through the very nature of capitalism, that this great injustice is realised.

We are in the Asia-Pacific region, holding this regional meeting of organisations in the construction industry, knowing that in this corner of the planet, the imperialist interventions are in full swing.

The main goal of these interventions is the hegemony of the various imperialist centres in different areas of the planet and the re-division of the world. The main tool utilized to achieve this goal is war.

The imperialists ruthlessly and openly intervene in the various countries to control them both their geostrategic importance, as well as their energy resources. The cost of these wars is paid by the workers and the socially weak, women and children.

The imperialist wars in Syria and Iraq are in full swing, as the imperialist powers openly intervene in the internal matters of these two countries, in order for the neo-liberal plans of the bourgeois governments and the capitalist decision-making centres of the west to be implemented. As always, the millions of refugees and the weak are the one being sacrificed in the altar of an increasingly growing profit. We sternly condemn such practices and we support our comrades in these areas, fighting against such interventions.

These imperialist interventions though, are not materialised in the form of war alone. They appear in other forms in the area, such as the financial, free trade agreement TPP among USA, Japan and other countries (Trans Pacific Partnership). This deal covers roughly 40% of the global economy, creating a block with fewer trade taxes for many products. If TPP passes, then then huge multinational companies will be able to sue governments, even foreign ones, if they think that their profits are negatively affected. It is easily understood that they will be able, using their financial and political power, as well as the huge area of activities, to affect people and situations in order to increase their super profits, to the expense of the living and working conditions of the workers and the people in general. Behind this deal, lies the profits of the few, multinational companies and the exploitation of the many. Thus, we express our solidarity and full support, and we convey our militant greetings to the comrades from the affected countries, in their struggle against TPP.

Moreover, we have to mention our stance against nuclear weapons. The threat represented by nuclear weapons against humanity is great, not only in times of war but in times of peace, as the accident at Fukushima a few years ago has shown. Progressive movements all around the world are asking for a total ban on nuclear weapons and we join our voice with theirs, as we repeat our demand from our Asia-Pacific Seminar in Hanoi in 2014. In that, we the construction workers, can work in peace and contribute to the building of a better future, without nuclear weapons.

Lastly, in Japan, the reformation of Article 9 which prohibited the deployment of Japanese soldiers outside of the country, has signaled a new era for the Pacific country. In November, for the first time since the Second World War, Japan has sent troops into Sudan. We express our solidarity with our Japanese comrades and their struggle against the reformation of the Japanese Constitution and against the nefarious and belligerent politics of Prime Minister Abe which opened up the way for Japanese military involvement into US and NATO-led operations, threatening peace and security.

It is amidst such difficult conditions, around the world, that we meet today, here. It is made clear then, that such regional meetings are extremely important as we are given the chance to organise internationally, to exchange experiences, to come to useful conclusions and to practically apply them, always within our capabilities. In doing that, we should always keep into mind our common goals: The organized struggles that exercise pressure on local governments and the creation of alliances with political parties, in order to participate in the making of decisions that affect our lives, as well as the utilization of international organisations for the benefit of the workers. We must always keep in mind that we are united by our ideological and class-based approach, that the struggles are common for all workers and that our ultimate goal is the improvement of the living and working conditions for the workers and their families. In these common struggles around the world, it is UITBB that guides and unites us.

Until today, we have held 9 regional, Asia-Pacific meetings:

In these meetings, some of the decisions we have make, had to do with the organising of activities for different action days, such as the 8th of March (International Women’s Day), 1st of May, 12th of June (World Day against Child Labour), 3rd October (WFTU Foundation Day), 25th November (International Day for the Elimination of Violence against Women), 1st December (World AIDS Day) and 18th December (International Migrants Day).

Some of the decisions in these meetings, had to do with issues such as:

– Protection of migrant workers and their civil, financial and cultural rights

– Change of politics which brought about the crisis, such as privatisations etc

We should not be disappointed if we were not successful in some of these issues. The struggle goes on and even though it is a hard and long one, we will see it through to the end.

In this struggle and within such difficult conditions, our International Organisation has a very important role to play, always within the framework of our close relationship with WFTU. I would like to note here that we are especially pleased to see that WFTU is growing, since a strong WFTU means a strong UITBB, which consequently means better organisation of actions and activities, class-based unity and better results in our struggles. All organisations must keep in mind, in their daily struggles, both locally and internationally, the solidarity among the workers. It is only if we are united that we can succeed. Thus, we should always have as our moral compass the class-based content of our struggles, with the ultimate goal being a society without the exploitation of people from people, a humane society that is built for the benefit of the workers.

With these words, I would like to launch our regional, Asia-Pacific Meeting. I am certain that, with the views that will be expressed and the decisions for actions that will be taken, we will contribute to the workers’ struggles around the world and especially in the Asia-Pacific region, for a better life and a better tomorrow.