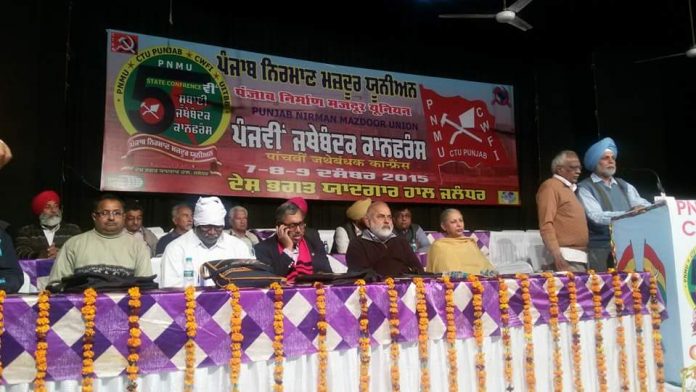 385 delegates from 16 districts participated in this conference. On 7.12.2015, Dr. Raghbir Bhagat Kaur, Chairman, Desh Bhagat Yadgar Committee, and chairman of the reception committee addressed the delegates. She told about the history of Gardar Party leaders in the freedom movement of India, their fight against the British imperialist for freedom of our country. It is all time inspiration not only for the Punjab working class, but also for the toiling masses of the entire country. 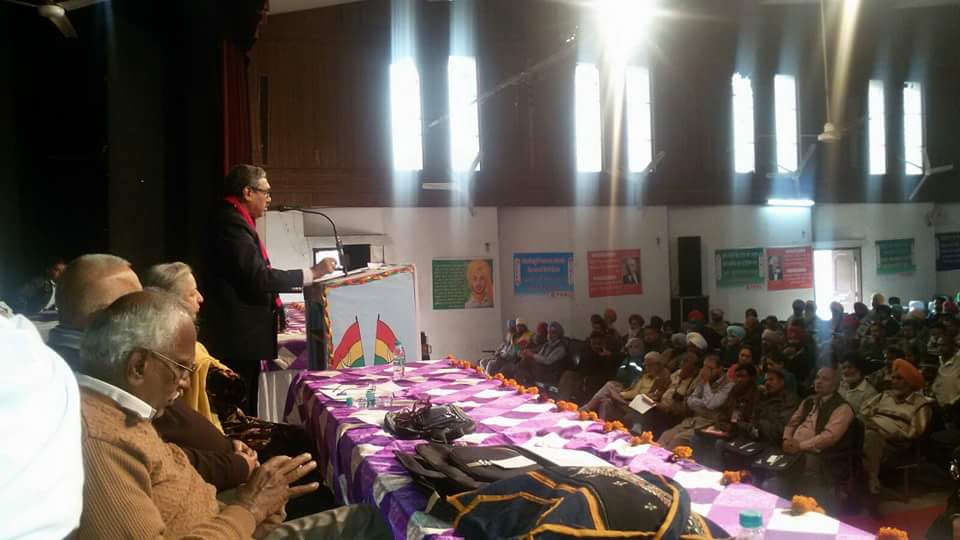 Comrade R. Singaravelu, President of CWFI addressed the delegates. He told about the present socio-political situation in our country and what are the tasks before the working class right now. Comrade Jagdish Raj Sharma from Jammu & Kashmir, CWFI Secretary and Bhanwar Singh, Secretary CWFI, from Rajasthan, addressed the delegates and shared their experience in their own states on how the BJP Government is curtailing trade union rights in Rajasthan and BJP and PDP government in J & K depriving workers rights. They also urged for bigger united movement of the construction workers to ensure welfare benefits to them.

Comrade Debanjan Chakrabarti, General Secretary, CWFI, in his inauguration speech narrated in details how the BJP government curtails the benefits of the construction workers in different ways. Labour Laws are being introduced to curtail hard earned workers rights. He referred to the Gujrat Government recent labour laws amendment as a glaring example of snatching workers’ rights in favour of capitalists.

In fine, he spoke of the sustained movement to create pressure on the government, both at central and State level to protect workers’ legal rights and to ensure more benefits for the construction workers through the establishment of a welfare board.

Following the presentation of the General Secretary’s Report by Comrade Harindar Singh Randhawa, 45 comrades spoke to this report. 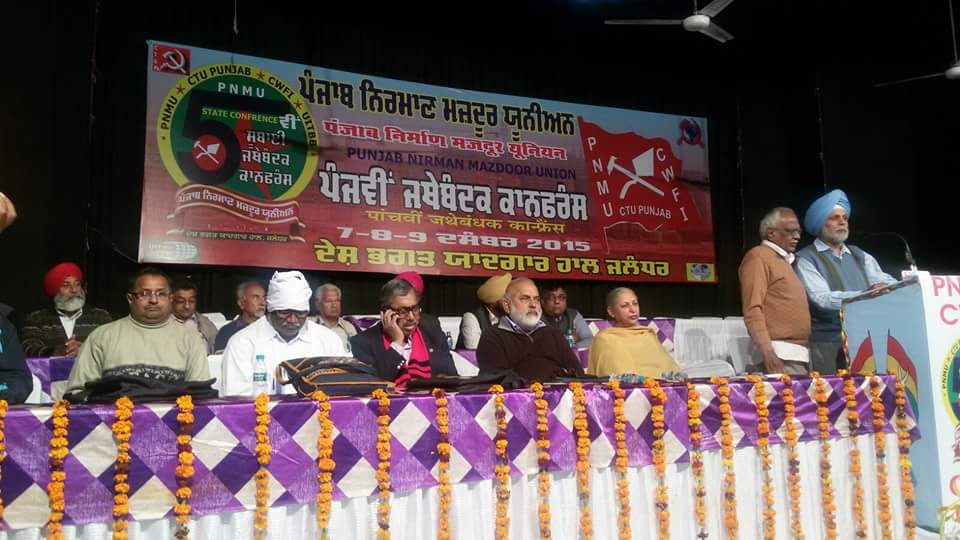 Comrade Prem Gautam, convener of northern regional committee of CWFI, addressed the delegates and told about his experience in Himachal Pradesh and he demanded a better coordinated movement in this Northern Regional States Unions.

Comrade Kotam Raju, Vice-President of CWFI and General Secretary of Telangana – addressed delegates and shared his experience in Telangana and Andhra Pradesh.

The conference elected unanimously a 115 member working committee with 35 office-bearers:

The conference has taken up the task of increasing membership from 30,000 to 1 lakh within the next 3 years. In addition, it was decided within the union to set up a migrant workers sub-committee, a working-women sub-committee, an education sub-committee to take up respective issues in a proper way.

The conference decided to hold 3 workers’ rallies during the month of March 2016:

The conference has also decided to expand their union network in remaining 6 districts where they don’t have any organization till now.