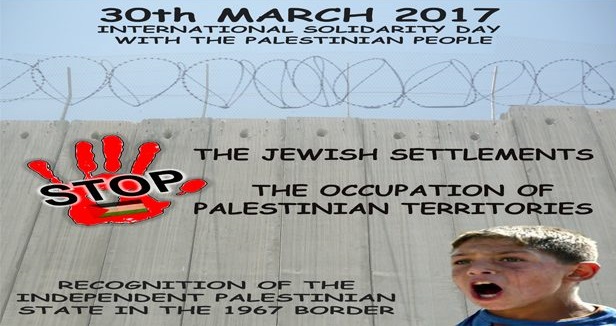 30 MARCH 2017: WFTU DAY OF SOLIDARITY WITH THE PALESTINIAN PEOPLE STOP TO THE SETTLEMENTS!

The World Federation of Trade Unions organizes a Day of Solidarity with the Palestinian People on 30 of March 2017 and calls on its affiliated trade unions and friends all over the world to be at the forefront by developing specific action! On the occasion of the WFTU Day of Solidarity with the Palestinian People on 30 of March, all workers and ordinary people of the working class worldwide are called upon to give real expression to their solidarity with the people of Palestine against Israeli aggressiveness and occupation, even more intensified after the election of Trump’s government in the U.S.A., as it is obvious from the announcement of the building of 3.000 houses of Jewish settlers in the West Bank, as well as from the recent bill of the Israeli Knesset, legalizing the grab of Palestinian property in the same region. The people of Palestine have been suffering for many years from the Israeli aggressiveness, from the settlements, the looting of the natural resources and products of their land and from the blockade. Palestinian children are murdered in the streets. Workers are imprisoned every day. Today more than 300 Palestinian children are detained in Israeli prisons!

The fight for the end of aggressiveness and settlements, for the recognition of a free and independent Palestinian state within the borders of 1967, with East Jerusalem as its capital, depends first and foremost on the struggle of the peoples, from the struggle of the organized class oriented working class movement, since the workers participating in it are fully aware of the cause that generates imperialist interventions and atrocities against the peoples, which is none other than the insatiable appetite of capitalists for continuous profitability through the exploitation of workers. Therefore, it is the workers those who can resist, those who can demand and stand up for the end of the destruction of the Palestinian people and land, through the activities and the initiatives of their trade unions. The workers have the power to impose through their struggles their fair demands at the cost of the few and for the benefit of the many. The WFTU was, is and will be on the side of the people of Palestine. On 30 of March we participate dynamically in the manifestations of WFTU affiliated trade unions and friends in every corner of the world in solidarity with the people of Palestine. In every city, country and sector, organize protests at Embassies and governments which support the policy of Israel, at international organizations which pretend to feel sorry about the crimes against our Palestinian brothers and sisters.