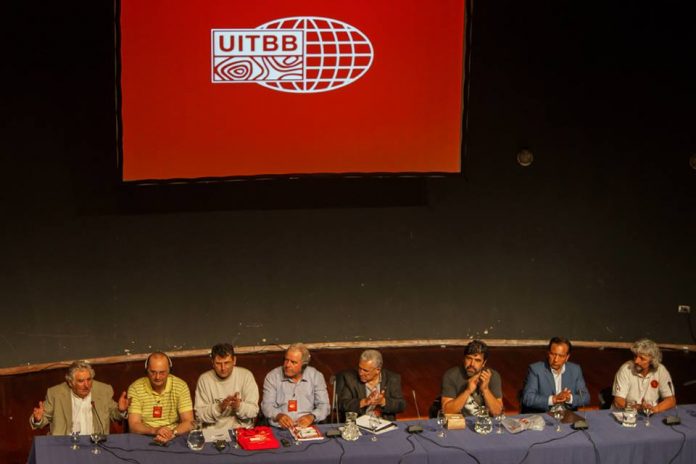 TO UITBB AFFILIATES AND SUPPORTER UNIONS

On the occasion of the World Day for Safety and Health at Work (28 April 2015), which has been declared by the International Labour Organization (ILO) to promote the prevention of occupational accidents and diseases globally, the Trades Union International of Workers in Building, Wood and Building Materials Industries UITBB launches from its 16th World Conference held in Montevideo 15-17 April, an urgent call to all affiliated and supporter unions to mark this day by local, national or regional action to raise awareness on the criminal, inhuman working conditions faced by tens of thousands of building workers employed on the building sites for the World Cup in Qatar with the complicity of FIFA, the Qatar government and major multinational corporations.

UITBB recalls that according to estimations by the International Labour Organisation (ILO), approximately 60000 fatal accidents (17% of the total number of fatal accidents) were recorded in the building industry since 2001, even though the sector employs only 5-10% of the total number of workers. Moreover, reports indicate that more than 45000 non-fatal labour accidents occurred during the same period.

One of the most blatant cases at this very moment is the “industrial manslaughter” on the building sites for the Soccer World Cup in Qatar in 2022, where tens of thousands of immigrant workers are victims of savage practices of violations of basic human rights, where they are kept like prisoners, without pay, lacking decent sanitation and housing conditions, having to work like slaves for 10-12 hours under high temperatures (40 C), etc.

The 16th UITBB Conference held in Montevideo passed a resolution in which:

“ UITBB calls for and pledges to support a campaign by the international trade union movement to help organize and support workers in Qatar building the infrastructure for the 2022 World Cup.

–          Epose the failure of FIFA to act on disgraceful conditions for workers in Qatar building the infrastructure for a competition FIFA will promote and profit from.

–          Pressure the government of Qatar to urgently put an end the exploitation of workers by contractors that government has engaged.

–          Assist building workers in Qatar to organize and campaign to improve their wages, conditions, health and safety.

–          Call on all national football bodies and player associations to join the campaign by refusing to participate in the 2022 World Cup unless FIFA and Qatar address the position of building workers in Qatar.”

The UITBB urges national unions of workers in our trades to make the 28 April a day of mobilization and action by organizing, in accordance with their possibilities, as many activities as possible. These can include special piquet lines in front of the headquarters of national soccer federation, press conferences, rallies to speak about the inhuman conditions of migrant workers, promoting solidarity among workers, etc.

n behalf of the UITBB secretariat