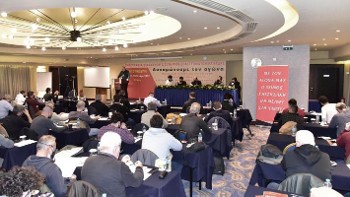 The 26th Congress of Greece’s Federation of Construction Workers and Allied Trades was held in Athens with great success, from 28-30 January 2022.

The class-based forces maintained their 13 seats at the General Confederation of Greek Workers and increased their seats at the administrative council from 28 to 31.

The President of the Federation and member of UITBB Secretariat, Giannis Tasioulas, said that the workers in the construction industry can be successful if they believe in themselves, and underlined that they draw strength from the glorious history of the past, so that they can write their own history, in trying to achieve the life the workers deserve.

On behalf of all the construction workers around the world, members of UITBB, I would like to convey our militant greetings, and express the international feelings of solidarity and support in the daily struggles of Greek workers.

Your 26th Congress, colleagues, is meeting once again in the midst of a new wave of pandemic that is sweeping the world. At the same time, once again, we are witnessing a global effort by the forces of capital, to shift this burden on the shoulders of the workers. Their ruthlessness, combined with their insatiable thirst for more and more profit, leads to tragic situations for the masses all over the world. From Asia to Africa, from Europe to Latin America, the workers are paying with blood the reluctance of those who call the shots to take action in favor of the poor. Their innate tendency to accumulate profits was expressed through the pandemic once again.

Social inequalities are deepening, the underprivileged are multiplying and the capitalist system’s inability to manage crises such as the COVID-19 pandemic has become abundantly clear, with the privatization of public health systems now resulting in the deaths of thousands of people around the world. Governments ensure that the profits of monopolies will continue by sponsoring private clinics, while lowering the level of health offered in public hospitals. But the health of the many means nothing to them, especially in this time of capitalist crisis, which proves that capitalism is a dangerous virus, which gets to decide who will live and who will die. We do not accept that the lives of the workers can be measured and used as bargaining chips. We must all be healthy and work in safe workplaces, with the help of a strong, public health system.

At the same time, poor countries, especially in Africa and Asia, have not received the vaccines they need, while rich western countries have begun receiving the 4th dose. Characteristically, while in Europe 67% of the population has received at least one dose, in Africa this percentage is only 14%. If we do not realize that we are in this together, the problems will continue. On the other hand, the construction industry around the world faces the same problems as always: the use of cheap labor, the savage exploitation of vulnerable groups of workers such as immigrants, poor to non-existent safety and health measures due to costs, the challenge and abolition of Collective Bargaining in many cases and a vicious attack against labor laws with anti-labour measures.

It is made clear, once again, that the only path that contains hope for the future is that of class struggle, of international solidarity, of the realization that we can fight all difficulties if we are together and the international exchange of experiences and global unity of the working class are essential if we are to achieve our goals.

UITBB, a class-based movement with members around the world, is at the forefront of the struggle, across the globe. To mention but one example, we all know that 2022 is the year of the World Cup which will be held in Qatar. During the construction of the stadiums, 7,000 of our colleagues from poor Asian countries such as Bangladesh, India and Pakistan have sacrificed their lives, working in inhumane conditions, which are no different from slavery, and many thousands more have been injured. UITBB has launched an international campaign under the slogan “Do not build stadiums on workers’ blood. Take action now!” and has mobilized its member organizations around the world, to put pressure on FIFA and the Government of Qatar, to immediately end these practices. This campaign seems to be having results, as some countries as well as international personalities have already spoken out against these practices. We will continue to strive to achieve as much as possible.

Closing my short intervention, I want to promise that no matter how many difficulties we face, we will be on the side of the workers in Greece and indeed of the world, in all continents, Africa, Asia, Europe, America, and I call on you to walk together the path of hope, of class struggle and of success. Rest assured that the future belongs to the employees.

With the hope that the pandemic is coming to an end, we maintain once again that the future is forged in the fire of class struggle, in our daily struggles, in the education of the workers, in the progressive and organized reaction to the violent attacks of the capital against the people, so that the exploitation can stop and a fairer distribution of world wealth can come about towards changing society.

Long live the struggle of the workers!