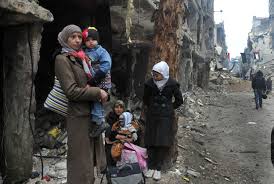 On solidarity with Syria and people of the Middle East.

The 16th Conference of the UITBB held in Montevideo, Uruguay, reviewed the unfortunate events which are taking place in some Middle Eastern countries, especially Syria and Iraq as a result of the blatant interference of the world imperialist and reactionary powers in their internal affairs, represented in the support given by these powers to the terrorist armed gangs who commit the most heinous crimes against innocents and against humanity. The Conference reviewed also the victories achieved by the steadfastness of Syrian and Iraqi peoples in cohesion with their national armed forces.

The conference is gravely concerned about the attempts of those aggressive powers to expand their interference and hostile activities into other countries. The 16th Conference highly appreciates the sacrifices of Syrian people, its national army, working class and trade union movement in defence of their country and to put its productive and industrial facilities as well as its infrastructure into work fully and effectively again.

The 16th Conference of the UITBB confirms the solidarity of all construction workers all over the world, and in all positions with the Syrian people in their historical struggle and battle against the aggression and against the imperialist reactionary conspiracy, which is targeting all achievements of Syrian people and Syrian working class that have been achieved through decades of sacrifice. The conspiracy also targets the Syrian state structure and its universally recognized legitimacy institutions.

The Conference condemns all forms of reactionary imperialist intervention in the internal affairs of the Syrian people and calls upon the international community and its various institutions, particularly the Security Council and the United Nations, urging them to condemn the aggressive acts and crimes committed against Syrian people, and demands the immediate cessation of funding, arming and training of the obscurantist and takfiri terrorist forces who take the role to implement the schemes of world imperialism, led by US imperialism and international Zionism.

Long lives the militant solidarity among workers of the world!

16th Conference of the UITBB