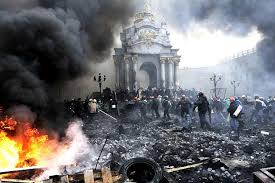 UITBB’s 16th Conference condemns the anti-labour and anti-democratic Ukrainian government, which is supported by fascist powers and operates as a puppet for NATO, the USA and the European Union.

The confrontation of NATO-USA-EU with Russia lies within the context of intra-imperialist antitheses, aiming at controlling the production and transfer of energy as well as other interests.

This confrontation which is expressed in armed conflicts, economic measures and sanctions, is getting worse and the Ukrainian people suffer the consequences. The announcement of the US government for sending more military equipment to the Kiev government is very troubling as it carries new dangers for the Ukrainian people.

The persecutions against fighters, communists and the Ukrainian communist party, shows that the attack on the people will continue, revealing that the capitalist powers are concerned by the actions of communists and other fighters.

We express our solidarity to the Ukrainian people and the persecuted fighters. We support the right of the people of Ukraine to freely decide their future, without any imperialist interventions.

We call for an immediate cease of the military operations which endanger not only the country and the people of Ukraine but the countries and the peoples of the region as well.

We call upon all peoples to fight against capitalist barbarity which breeds nothing but poverty and wars.

We call upon them to fight for creating a society where the working class holds both power and wealth, so that the problems can be eradicated and the life of worker families can achieve a higher level of prosperity.