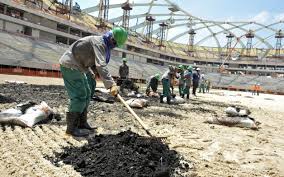 Resolution on the Qatar World Cup 2022

UITBB calls for and pledges to support a campaign by the international trade union movement to help organize and support workers in Qatar building the infrastructure for the 2022 World Cup.

–          expose the failure of FIFA to act on disgraceful conditions for workers in Qatar building the infrastructure for a competition FIFA will promote and profit from.

–          pressure the government of Qatar to urgently redress the exploitation of workers by contractors that government has engaged.

–          assist building workers in Qatar to organize and campaign to improve their wages, conditions, health and safety.