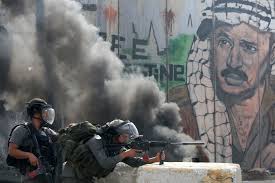 The UITBB condemns the brutal escalation of the Israeli aggression against the people of Gaza. Violence and death are loose. The Israeli army is perpetrating a real genocide against the Palestinian civilian population, killing hundreds of civilians – men, women and children.

The world and international institutions cannot remain indifferent to the policy of state terrorism, war crimes and serious violations of human rights practiced by Israel.

Tel Aviv authorities cannot go on with total impunity with such crimes against humanity. In this context, are particularly serious the responsibility of the US and NATO with their financial, military and political to the Israeli government and of the European Union and several of its Member States when they place on the same footing victims and perpetrators and maintain ample economic and political relations with Israel.

The massacre of the Palestinian people must end. It is urgent to impose peace.

For over six decades, Israeli governments have signed peace agreements only to break them the next day, pursuing what constitutes an authentic ethnic cleansing of a people.

We urge workers and supporters of peace to intensify the protest and to mobilize against this horrible murder of a defenceless population.

We urge the UN to use all its means at to stop the genocide.

The UITBB reiterates its deep and active solidarity with the workers, the labour movement and the people of all Palestine, and continues to demand an end to the aggression and occupation of the Palestinian territories by Israel.