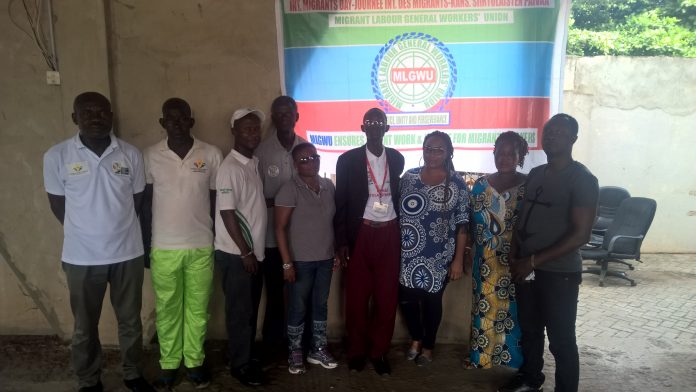 His Excellency Ambassador of France,

As the world commemorates 2017 International Migrant Workers’ Day 18th December, the Migrant Labour General Workers’ Union (MLGWU) Ghana decided to start its activities today the 15th December, 2017 as part of the Commemoration. And I am very delighted to deliver this Speech with your solidarity support.

I wish to thank all our Guests here for honouring the union’s invitation as well as all internal migrant and immigrant labour workers and members of the union who have gathered here to show your international solidarity support in remembering our dear brothers and sisters who lost their lives during the 2017 labour migration struggle to take care of their families and contribute to the development of our nations. At this juncture, shall we bow down our heads for a Minute-Silence for our dear ones who lost their lives.

I urge all of you contact the union or ask friends for help in case of counselling, legal assistance, jobless and immediate hunger situation instead of hiding your emotional problems and die or take unapproved route to migrate for greener pasture. Let us take lessons from recent incident in Libya where African Immigrant Labour Workers are being exploited and sold. We were misled by ignorance; now we have trade union so I am sure we can make new life in Ghana. Tell your friend “Illegal labour migration and precarious work kill; but Safe Migration and Decent Work give future.” Please, join me to use today’s event to thank some Africa leaders especially our government and IOM for continuous facilitation on another batch of emergency evacuation of our dear victims. But this is not enough protection; we expect them to provide employment protection for them in Ghana after each evacuation.

Labour Migration is NOT a Crime. Because the main purpose of any intended migrant labour worker is to migrate for employment or to work. The sentiment which caused Europeans to migrate to Africa to work is the same for us Africans. Discovery of hidden natural substance, barter trade, sending Gospel (Word of God), establishment of religious and educational institutions constituted brain drain, circulation and waste brain in labour migration as we are also doing today to come out of poverty, develop our nations and create employment for present and future youth. Even still our colonised or Europeans are migrating to Africa for job market and some are members of our Union. So, labour migration is part of daily labour life. That is why our Union embarked a campaign dubbed “Safe Migration and Decent/Sustainable Employment” Also, let us understand that we have internal migrant and immigrant labour workers. Not only foreigners are migrants. MLGWU organises both Ghanaian and foreign workers. 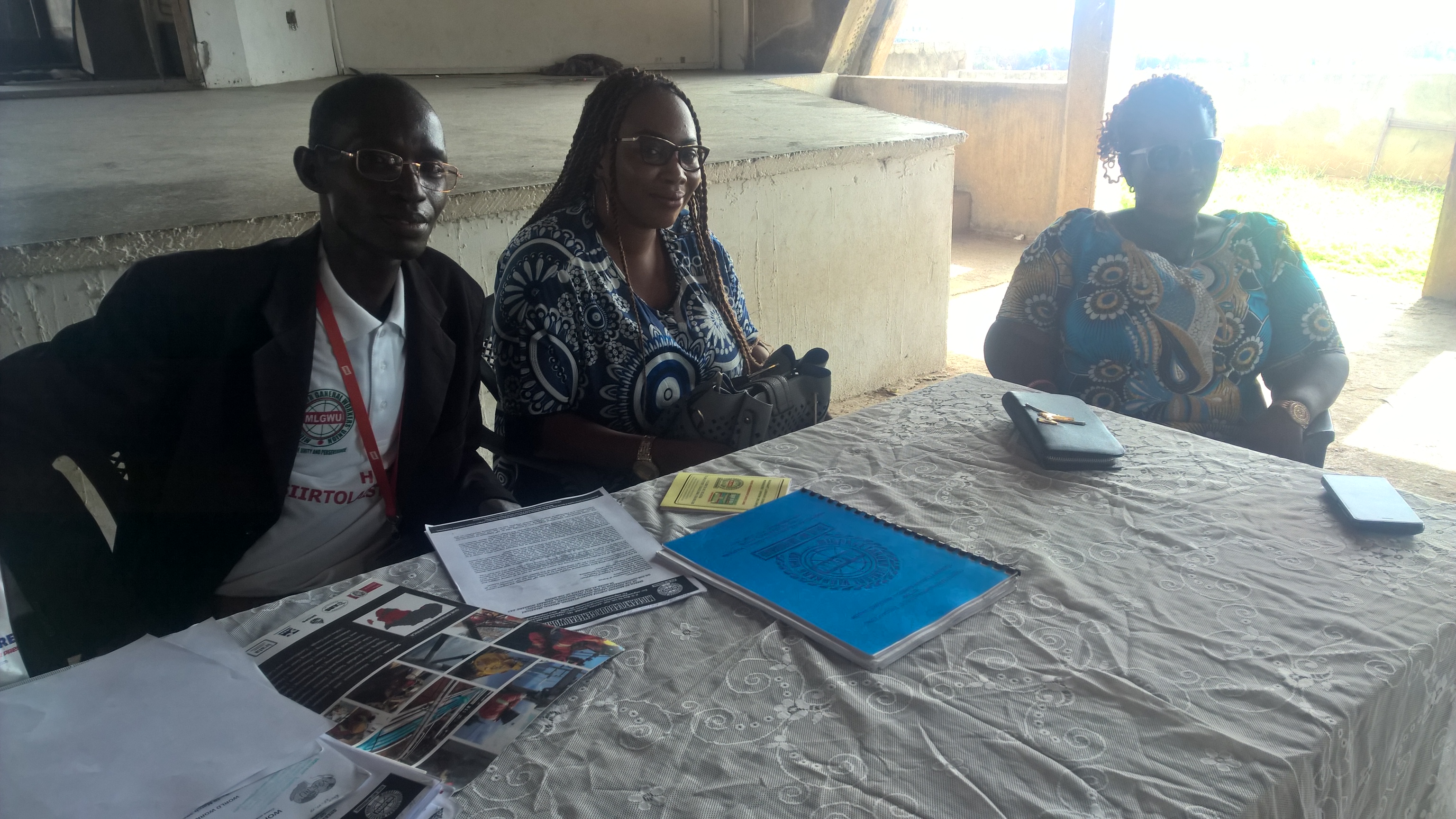 The United Nations (UN) International Migrants Day is annually held on 18th December to recognise the efforts, contributions, and rights of migrants worldwide. Each year the UN invites governments, organisations, and individuals to observe International Migrants Day by distributing information on the human rights and migrants’ fundamental freedoms. People are also invited to share their experiences and contribute to designing action plans to ensure their protection. Organisations actively involved in promoting the day include us as migrant labour trade union.

It is enshrined in the MLGWU’s Constitution two (2) special days to commemorate among international days namely ‘Action Day for Migrants and Refugees’ in October when the Union draws of attention of governments, authourities and employers on concerns bordering migrant labour workers and refugees and their families’ situation and ‘International Migrant Workers’ Day’ as the Remembrance of dear migrant labour workers who passed way during the course of their labour migrating struggle for greener pasture on land, sea, desert and air being caused by accident, illness or natural death. Prior to D-Day

18th December, green Candles are put on at certain points or squares, prayers are said and hold workshops on Safe Labour Migration and sharing working, education and nation building development experiences as well as creating platform for new migrant (membership) entrants to join the Union. 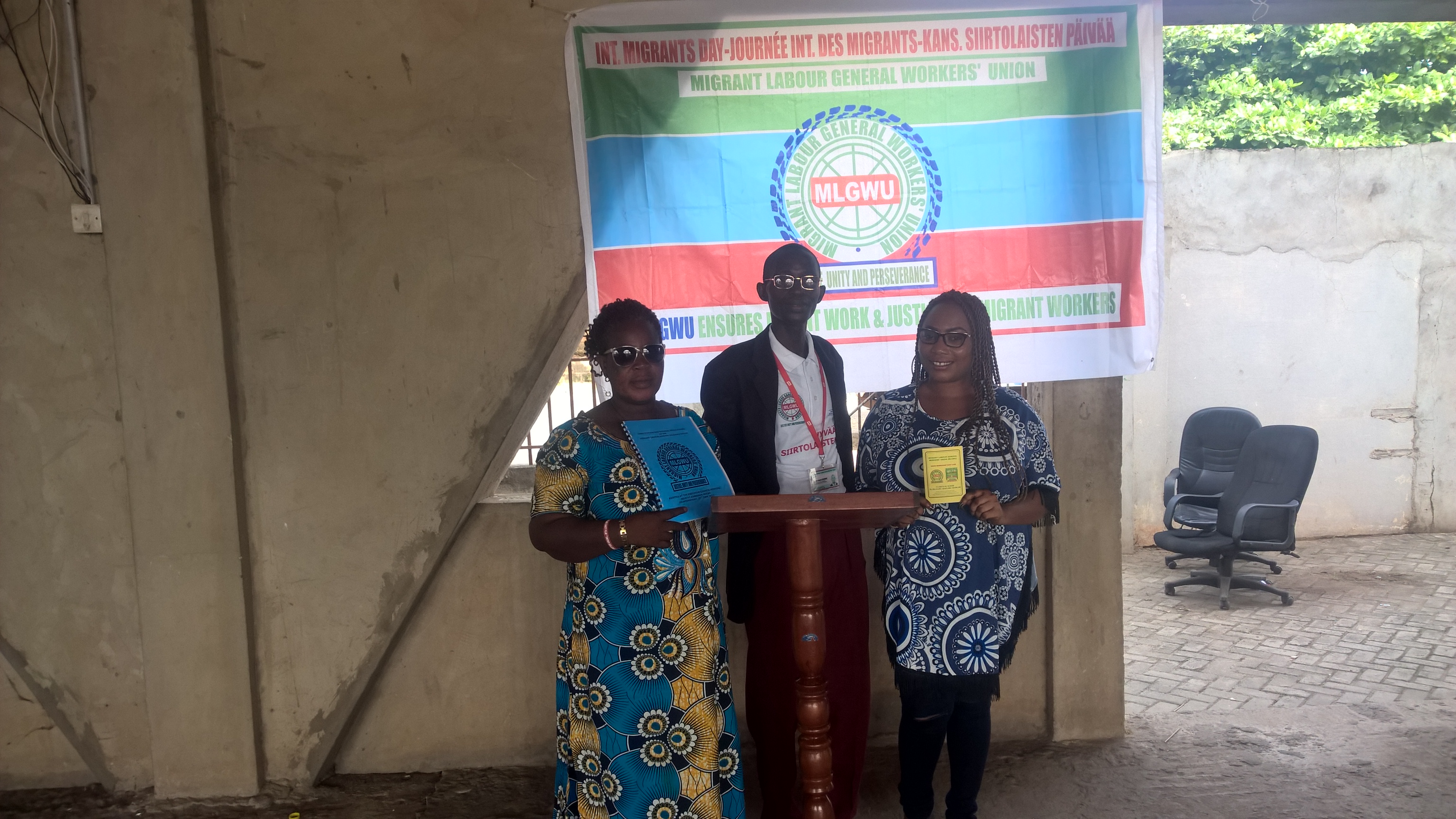 The word “Migrant Worker” becomes an enemy or a wrong perspective especially for youth in labour market. So many people including Consul Officers and staff at the embassies look down upon them. Hence, many visa refusals to migrant workers’ applicants. Among others embassies, French-Netherlands and Italian embassies refused visas to leaders/members of our Union without tangible reasons on trade union international education conferences between last and this year. This year programme was a World Youth Workers Congress in Italy in from 1st to 4th October, 2017 when our affiliate World Federation of Trade Union (FSM) hosted by USB in Rome. So I can boldly say that behaviour of some of Ghanaian Interviewing Staff at the embassies who improper handling visa applicants rather instigate illegal migration and also become barrier for trade union activists or applicants.

‘The future of the migrating youth will NOT come by its’ self, if the our trade union do not take action’ to draw government attention in addressing the difficulties young workers face in Ghana and African Continents where unemployment deprived youth and school leavers the right to work during their most productive age which is one of reasons some Ghanaian migrant young workers become prey in the hands of dubious agencies migrating illegally through deserts and sea and unapproved route.  Lack of dignified work or facing this situation, many Ghanaian young people and foreign nationals resort to emigrate and re-emigrate in seeking greener pasture or better employment and education abroad. But despite that, Migrant Labour General Workers Union will continue to educate external migrants and immigrant young workers in Ghana on Safe Migration. 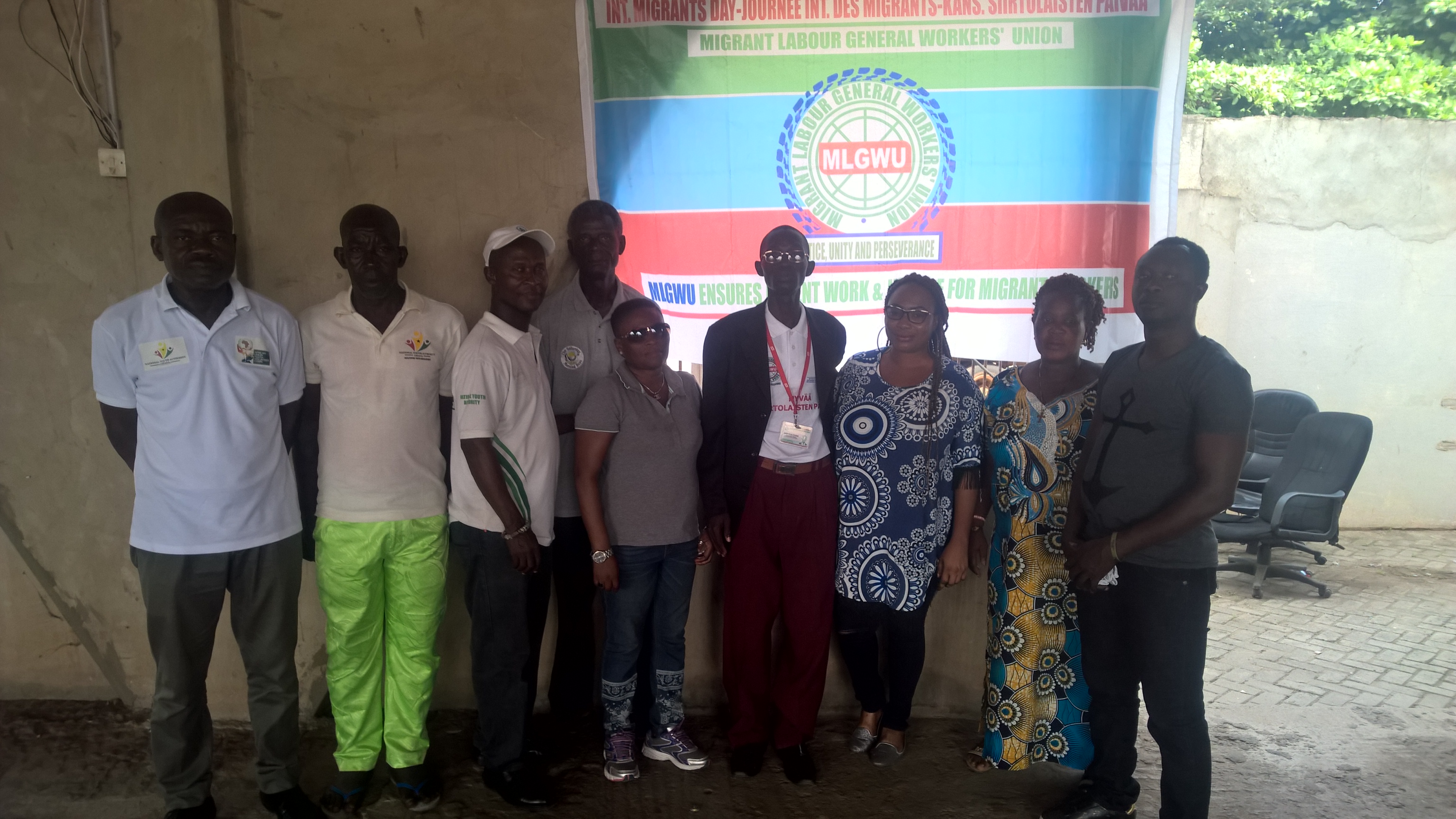 In Ghana, however, the unemployment rate does not reflect the seriousness of the labour market situation for young migrant/immigrant people, since a large number of young migrant/migrant people who work do not earn enough money to get out of poverty and also denied of payment of social security. What is worst for migrants/immigrant in Ghana is that they are exposed to informal working relationship; undeclared work (without contract agreement) such domestic/house, agriculture, mining, construction, hospitality, commerce, fishery etc. Child labour is real in Ghana due to poverty rate in rural areas caused increase child migration into cities.

Indeed, the working youth must be in the heart of action of the class oriented trade unions all over the world. I do my best to make sure our Union focus on challenges confronting migrant working youth with much attention to the development of young trade unionists to enable them lead class to future victory.

Indeed, young workers all over the world suffer the consequences of the world crisis of capitalism or self-interest employers, especially internal Migrant and Immigrant young workers as worst as school leavers-job seekers in Africa and these led to poverty, hunger, war, refugees, unemployment, precarious employment etc.

Sister Chairperson, MLGWU is a registered democratic migrant labour workers’ trade union representing all or general Ghanaian (Internal Migrant and (foreigners) Immigrant Labour Workers those who are employed or engaged or expect to work in Ghana and across Ghana-borders in different fields of work including Agriculture, Food, Tourism/Hospitality, Domestic, Construction, Commence/Shopping, Religion, Education, Mining and Allied Industries.

The mission statement of MLGWU is “To organise and integrate general migrant/immigrant labour workers into recognised democratic, dignified and sustainable trade union in promoting harmonious relations between  employers and workers to ensure decent work, social justice,  occupational health and safety, socio-economic rights, living pension and decent life for them” by fighting for migrant workers’ rights through elected workers leadership and believe in themselves by collectively solving issues that affect them as migrant workers in order to bring changes in their day to day lives to avoid illegal labour migration and precarious employment.

The numerical strength or membership of the Union early this year was 920 but currently reduced to 520 due to unfair termination of precarious engagement, lack of funds to continuous education for sustainable work/members and home return of immigrants for good.

Trade unions stand up for the rights of all workers, no matter where they come from, and have a long history of fighting against discrimination. These principles of equality and workers’ rights however have come under attack. Migrants are scapegoated for problems such as lack of decent jobs, low wages and services. This rhetoric, combined with increasingly precarious conditions at work and cuts to services and benefits caused by austerity, has fuelled public concern about labour migration.

Your Excellency, Ambassadors and Guests, in trade union tradition, Organising is main trade union strategy for survival and growth. The effectiveness of the other well-known trade union strategies such as Collective Bargaining and Collective Action depend on the ability of the unions to organise. A union density is a good indicator of union strength, in terms of ability to protect the interests of its members. Although, MLGWU is a young trade union, I promise the leadership and our affiliate both Ghana and abroad to support me in prayer so that I would be able to organise prospective migrant labour workers in One District One Factory Industries next year. Because, organising in trade union context, is the process of bringing workers together under the umbrella of a trade union so that they can, together, use their numbers and labour migration power to protect their interest. Also, efforts to seek sponsors for organising members and education activities on Job Skills Training and re-training with French language are on course. I therefore urge members to pay your union dues and support growth of the Union.

Dear Media and friends, MLGWU assists for migrant/immigrant labour workers on labour market as well as education. To avoid payment of an exorbitant fee(s) charging by some employment agencies, MLGWU has made a move in helping immigrants job market as part of its education campaign dubbed” Safe Migration and Decent/Sustainable Employment in public, in schools and border towns/transit points. During 2017 year, 25 migrant/immigrant jobseekers got employment through our union free of charge, among them 4 were given accommodation by their employers. But some of them are facing problems of realise or permission from employers to attend trade union meetings and payment of union dues.

Often undocumented workers or irregular situation migrant workers suffer the humiliating and degrading experience of being excluded from society, church, school and workplace on top of inhumane working conditions because the law does not provide explicit protections for their rights at work for them. “The truth is, all workers have rights, including documented, undocumented migrant workers, jobless and retirees because workers’ rights are human rights”. Trade unions across the world with the same class including MLGWU Ghana are fighting for migrant/migrant labour worker rights.

To become a member, any Internal Migrant or Immigrant Workers or persons who works in Ghana permanently, temporarily, casually or seasonally and whether the wage he or she earns is fixed, changing, monthly, daily or in any other method of calculating wages according to production, piece work or otherwise can join this Union.

On behalf of the Union and its members, I use this event to demand from the government and the employers as well as any organisations/agencies concerned on following:

We invite junior staff at the embassies to join MLGWU as well as all foreign nationals. This is your Union. Come and join for your own benefits.