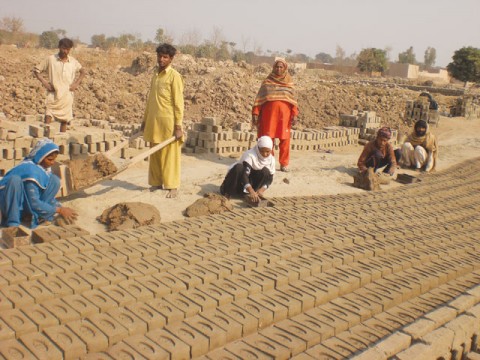 In the era of modern architecture, as the act of construction has reached its peak and the latest technologies have been introduced to the world, a great number of humans, especially innocent children, are still being used in the production of bricks at brick kilns in an inhumane manner. Although the government has introduced many laws against child labour, these rules continue to be violated in the most appalling way.

The employers of brick kilns continuously infringe government laws. Feudal lords, bureaucrats and businessmen are involved in the brick industry. They earn a lot and draw huge profits from the brick industry. These are the people who in our society are rich by status, but poor in terms of humanity. Among them we can find so-called government employees, who pretend to be servants of the nation, but ironically become the reason of black marketing in our society and promote injustice.

The government of Punjab has established fixed wages for brick kiln workers. The sum of 1036 rupees has been fixed by the government for the production of 1000 bricks. But still, the employees receive no more than 400 to 650 for 1000 bricks. Moreover, brick kiln employers receive “sood” (interest on a personal salary loan) on the amount of money, which they have advanced to their employees.  Employers deduct 25 in every 100 rupees as “sood”. This shows the cruel behaviour of brick employers. Since workers are often illiterate and not qualified, employers can easily capture their innocent mind by flattery and pay them minimum wages. Employers demand maximum work and pay minimum wages. Less input and more output. On can also find cases of human trafficking in brick kilns. Poor children are bought by brick employers and they are made into lifelong workers. They use them as their slaves and give them a minimum amount of food, which barely allows them to survive in their world of bricks. Some NGOs are active in retrieving these children and in many cases they discover high levels of injustice and cruelty as well.

Cases of sexual harassment can also be seen in such places. These innocent children are being exploited by these people, who behave like wild beasts against other humans, while they pretend to be educated members of society. Such people are a stain for any civilised society. This phenomenon is known all over the world. Another important fact about brick employees is that they are employed in the same job generation after generation. In a very early age, children learn this skill from their elders. Since parents rarely have enough to survive, they bring their children to the brick kiln. Spark and CACL, two local organisations of Pakistan, are working to protect these children, trying to see children’s rights respected. However, they are not very successful in achieving their goal, as their efforts to see the implementation of the laws often fail. Only active trade unions, the ILO and global marches against child labour have so far scored some results. Even though these federations are at times successful, they are still faced with the obstacles of feudalism and bureaucracy. In this world, every human being has an equal right to survive. No one is superior. There must be strict rules regarding child labour and it should be the responsibility of the government that these rules are upheld by the brick employers. Unfortunately, regulations are proclaimed but not implemented. The government must act harshly against brick kiln employers, who violate the law, so that other employers may take their place.  The government should offer training to labourers, who are doing the same job generation after generation. Brick kiln workers’ families should earn enough to satisfy their needs and their children should attend school and get an education like other children do.