UITBB has sent a solidarity letter to CIG Galicia, for their general strike on June 19: 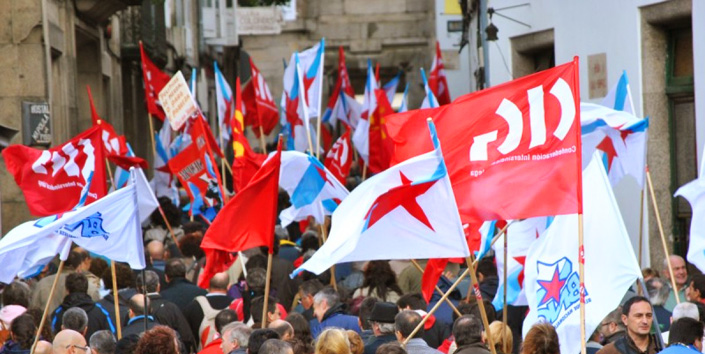 The organization Trades Unions International of Workers of the Building, Wood and Building Materials Industries (UITBB) wants to express its support and solidarity with the General Strike called by the Galician Inter-Union Confederation (CIG) on June 19, 2018, against the cuts and the neoliberal policies of the Government of the Spanish State and the follow-up of the Galician government, that do not do more than to back down in the labor, social and civic rights, and to increase the inequalities and injustices against the working class.

Tomorrow, May 25, the CIG will register the call for a general strike on June 19. You can’t wait anymore. It is in the game to avoid that the new generations live in worse conditions than the previous ones.

The Spanish government of the PP in a parliamentary minority, full of corruption and impunity, reinforces the cuts in the budgets of the State, while the theoretical opposition of the Spanish left is not able to agree to expel them from the institutions, and end with all these labor and social reforms that cause so much damage. And the Galician government does nothing but follow the neoliberal policies of the state government.

The general strike is the necessary response of the working class to demonstrate to the economic and political power our willingness to fight for the recovery of our rights and for a dignified future.

We are aware that this situation is not limited only to our country. The advance of neoliberalism reaches all corners of the planet, and the struggle must be internationalist and solidary. This is demonstrated by the latest struggles and mobilizations on all continents: the mobilizations in Portugal, the ones that hobo against the labor reform of Macron or the struggle of the rail sector in France, Belgium, Italy, mobilizations in Argentina, Brazil and other countries of Latin America, even the American response to Trump’s policies, or big demonstrations in Asia, the days of the general strike in Guinea-Bissau and other countries in Africa … Labor rights are being attacked everywhere.

Here, in Galicia, we also believe that there are many reasons. And therefore, from the CIG we will not remain impassive in this situation, assuming the responsibility that the working class, which we represent demands of us.

We take the opportunity to send you a greeting of solidarity and class.